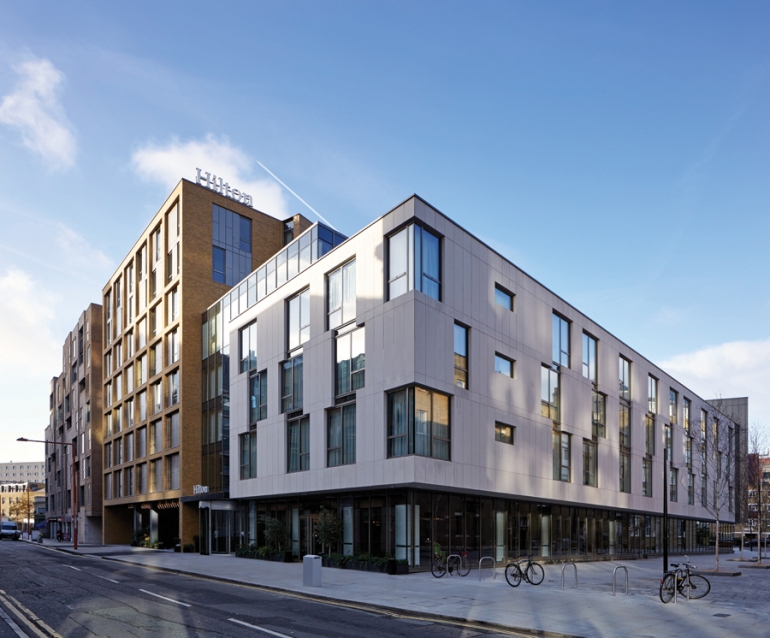 The 20,509m² flagship Hilton London Bankside stands proudly in the heart of Bankside’s bustling and thriving tourist and arts district. Dexter Moren’s design for the £48m luxury hotel combines a deep understanding of the area’s past with an understated quality that speaks positively to the building’s future.

he 292 bedroom five star hotel, Hilton’s first in central London since 2006, adapts the traditional brand into an urban, design-led ethos that looks to the next generation of hotels.

Combining quality and assurance with an appreciation of the uniqueness of the site and its industrial past, Dexter Moren has created two adjoining forms, one low and one tall, each with its own identity and linked by a volumetric glazed entrance and inner lightwells. The height and massing relate to its existing and proposed neighbours, echoing the urban character whilst creating a distinct visual reference at the junction of Farnham Place and Great Suffolk Street.

The calmly layered facades of brick, metal and glass create a contemporary feeling, reflecting the tonality and character of the surroundings. A lighter tone of brick is in keeping with the traditional local London stock, and a similarly lighter bronze coloured metal cladding, of a more engineered and robust nature, provides an instant sense of quality.

The layers of materials create depth and variety whilst retaining a common material language for the two main building forms. The taller block adjoins a neighbouring residential development. Glazing forms the base layer, followed by pearlescent bronze aluminium topped with a prominent brickwork framework containing glass and bronze panels. The lower block similarly expresses a glass internal layer, which is encased by a continuous limestone cloak. The two distinct forms are bound by a ribbon of glass that encircles the building at ground level, rearing up between the shapes to enclose and assert the hotel entrance on Great Suffolk Street, and again to express the dedicated Ballroom entrance on Bear Lane.

The robust and high quality materials not only proclaim the luxury and distinction of the whole building, but also provide a practical and hard wearing envelope that will continue to look good over a long life span.

The project also focuses on improving the public realm within the area through the pedestrianisation of Prices Street, creating a new tree lined piazza.

The proposed environmental improvements form part of the Bankside Urban Forest initiative to maximise the quality of public realm and open space in SE1, and introduce as much greening as possible. The developer of Hilton London Bankside has set aside funds from the project to improve the landscaping of the public realm around the building, including the streetscape along Great Suffolk Street, Bear Lane and Prices Street.

This includes the pedestrianisation of Prices Street and with new trees and planting, plus the installation of high quality yorkstone paving, cycle stands and a new lighting scheme. The scheme also provides disabled access to the rear of the neighbouring grade II* Kirkaldy Testing Museum.

The building’s brick, metal and glass facades are echoed throughout the interior spaces using a rich palette of exposed surfaces and layered materials, referencing the site’s industrial heritage. In the lobby, for example, the artwork is inspired by concrete reinforcement which adorns the wall behind reception, providing a minimalist backdrop. In the guest rooms, artwork makes a light-hearted reference to a cheeky urban fox, whose footprints were found in the screeds during construction. The Distillery Bar makes reference to the Stephenson & Harwood Distillery which occupied part of the site during the 1900s.

The Hilton London Bankside is a five star, upscale 292 bedroom hotel with a ground floor Distillery bar and OXBO Bankside restaurant, executive lounge, plus basement banqueting and event spaces. These include a 570m² ballroom divisible into three sections, eight meeting rooms including one boardroom and associated break-out and pre-function spaces. The leisure suite contains a 65m² gym and 17m long pool with excellent changing facilities.

The hotel’s entrance is located on the main route and Design Trail from Southwark Underground station to the Tate Modern. Since the opening of the Tate Modern art gallery and Southwark station on the Jubilee line, Union Street, Great Suffolk Street and Holland Street have linked together to form a key pedestrian route through this area of Southwark. This has been named the ‘Design Trail’ and delineated by orange lampposts.

Dexter Moren’s Hilton London Bankside is the newest five star hotel in Southwark, responding to the tourism boom in the area over the last 10 years, thanks to the development of The Shard, Borough Market, London Bridge station, etc.

Bankside is one of the oldest settlements in Britain, dating back over 6000 years to when the Romans built a bridge near the present day London Bridge. The surrounding area has been inhabited ever since.

Flourishing in the ‘Liberty of the Clink’ (the jurisdiction of the Bishops of Winchester) and outside the jurisdiction of the City of London, the area became a focus for activities not always welcomed in the City itself. Bankside became famous – or infamous – for its taverns, ‘stewhouses’ (brothels), animal-baiting pits (particularly bears) and, perhaps most disreputably, public theatres. The Rose, the Swan, the Globe and the Hope were the four Bankside playhouses of the Tudor era, and some of the first ever in London. Some of England’s greatest writers and players, including William Shakespeare, lived and worked there.Today Bankside’s heritage survives in its street names – Bear Gardens was the site of the bear baiting and Rose Alley was the site of the Rose Theatre.

During the late 18th century, Bankside quickly developed into an industrial environment, with docks, warehouses and wharves. Following industrial decline after the Second World War it remained largely undiscovered, until its recent renaissance as one of London’s prime visitor destinations. At Bankside, individual attractions have been joined up, to make a single lively coherent destination, accessible from the City via the Millennium Bridge and forming a natural riverside extension to the east of the South Bank. The area is refreshingly pedestrian friendly and around every corner another cultural highlight reveals itself.

In 2015 Bankside became a new Design District and the first south of the river for the London Design Festival.