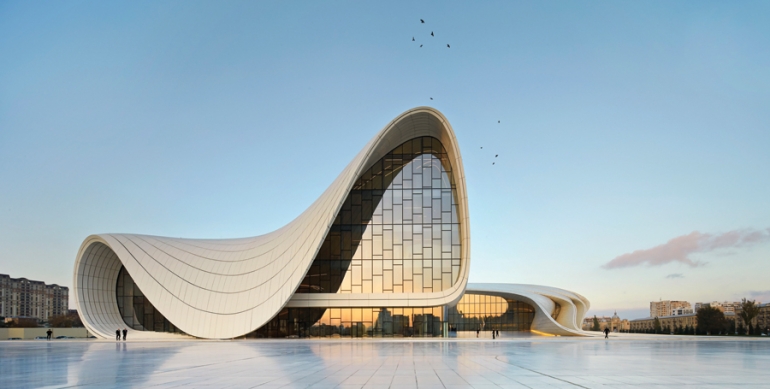 s part of the former Soviet Union, the urbanism and architecture of Baku, the capital of Azerbaijan on the Western coast of the Caspian Sea, was heavily influenced by the planning of that era. Since its independence in 1991, Azerbaijan has invested heavily in modernising and developing Baku’s infrastructure and architecture, departing from its legacy of normative Soviet Modernism.

Zaha Hadid Architects was appointed as design architects of the Heydar Aliyev Center following a competition in 2007. The Center, designed to become the primary building for the nation’s cultural programs, breaks from the rigid and often monumental Soviet architecture that is so prevalent in Baku, aspiring instead to express the sensibilities of Azeri culture and the optimism of a nation that looks to the future.

The design of Heydar Aliyev Center establishes a continuous, fluid relationship between its surrounding plaza and the building’s interior. The plaza, as the ground surface; accessible to all as part of Baku’s urban fabric, rises to envelop an equally public interior space and define a sequence of event spaces dedicated to the collective celebration of contemporary and traditional Azeri culture.

Elaborate forms, including undulations, bifurcations, folds, and inflections modify this plaza surface into an architectural landscape that performs a multitude of functions: welcoming, embracing, and directing visitors through different levels of the interior. In this way, the building blurs the conventional differentiation between architectural object and urban landscape, building envelope and urban plaza, figure and ground, interior and exterior.

The Heydar Aliyev Center is a national symbol for Azerbaijan, a catalyst for regeneration and, in the broadest sense, a regional showpiece. Constructing Zaha Hadid Architects’ audacious design for the Center drew on expertise from Turkey, the United Arab Emirates and the Commonwealth of Independent States, as well as further afield. This explains the feel-good factor and can-do mentality, which made it possible.

It is in the design of the auditorium that Zaha Hadid Architects’ approach can be seen at its most formalistic, and its swirling free-form geometry in American white oak was one of the practice’s principal challenges to the project team. For specialist Ankara-based contractor, 7koor, who were responsible for the construction of the auditorium, free-form meant anything but a free-for-all. The architects expected the outcome of their design exploration to be replicated to the letter, providing little scope for rationalization and no possibility of “design creep”.The forms of the auditorium, appearing to metamorphose in algorithmic sequence from one bay to the next, could not be reduced to repetitive modules.

At the outset, 7koor were unsure how to proceed, evaluating the alternatives of a five-axle CNC router-milled solid wood shell, 45mm thick for optimum acoustic performance, and a timber-clad carcass.

They also considered CNC router-shaped polystyrene, strengthened with fiberglass and veneered with timber. Concerned about accuracy, unsatisfactory wood grain patterns, expansion and contraction, 7koor rejected these options for a fourth they called “engineered craftsmanship”, that involved working with Rhino software to accurately construct a carcass from horizontal and vertical MDF members.

These members were CNC-formed, so they could be assembled to form a shape, which is a precise offset of the finished surface as modeled by Zaha Hadid Architects. Next, this surface was covered with four layers of accurately dimensioned 10 x 10mm American white oak strips, successively glued, nailed, worked, and adjusted until they precisely matched the geometry modeled by the architect, checked with digitally generated templates. This was the crafted stage of the operation. Each bay of the auditorium comprises three sections, one for the ceiling and two for its flanking walls, assembled from 8 to 15 subcomponents.

Such was the scale of the construction project that, overall, 230m3 of American white oak were used in the auditorium. Melih Gün, co-founder and owner of 7koor says that American white oak was chosen for the principal reasons that it “would perform well in an application where temperature and humidity levels would vary, it is homogeneous in texture with the right color for the desired end result, it has good working properties and, especially important for this project, it has good acoustic performance”.

7koor was not only the contractor of this project, but also was responsible for the acoustics and coordination tasks related to the auditorium. The company worked together with Dr. Mehmet Çaliskan from Mezzo Stüdyo Acoustic Consulting, also from Ankara.

For acoustic reasons, the internal surfaces were constructed as a shell within a box. Once this box was constructed, the internal shell was attached to a secondary steel frame, with rubber pad connections to the internal faces of its structure. An intermediary shell of multilayered sound insulation and steel wire suspension cables provide further acoustic isolation. Although this wasn’t a routine operation for the project team, its greatest challenge was the auditorium’s roof acoustics. This challenge was partly inherent in the project’s brief, requiring a space for conferences, which need low reverberance, so speech can be heard clearly, and music, which benefits from more reflection and richer acoustics.

The proposed use of the auditorium for opera and ballet as well as concerts was an additional complication, because each requires a different configuration of orchestra shell and pit. Zaha Hadid Architects’ prescriptive geometry, choice of reflective surface finishes and unwillingness to entertain acoustic enhancements that would transform the appearance of the auditorium according to its use, wound up the ratchet still further. This wasn’t just an acoustic form finding exercise.

Mezzo Stüdyo, no stranger to headstrong architects’ visions for auditoria or conflicting requirements in clients’ briefs, was unfazed and, like other project team members, accepted Zaha Hadid Architects’ detailed proposals as a given. Mezzo Stüdyo also knew a deus ex machina was to hand: coupled volume room acoustics. This involves two or more spaces joined by a common acoustically transparent surface, known as a coupling aperture. The core concept relies on unequal time requirements for sound decay in each space.

This entails excess energy in one space during the decay process, which is transferred to the other. This can produce a sound decay that is suitable for the desired acoustic qualities within a space. In the case of the Heydar Aliyev Center, an unused ceiling void adjacent to the proscenium opening provided an opportunity to construct an enclosure with reflecting surfaces to act as the coupling volume.

The configuration of flaps opening into this space was optimised through acoustic simulations involving 8751 plane surfaces derived from Zaha Hadid Architects’ model, using ODEON software. This configuration of multiple apertures provides a better diffusion and flow of surplus energy from the coupled room into the main hall than would be achieved with one large opening.

“As with all of our work, the Heydar Aliyev Center’s design evolved from our investigations and research of the site’s topography and the Center’s role within its broader cultural landscape. By employing these articulate relationships, the design is embedded within this context; unfolding the future cultural possibilities for the nation,” concludes Zaha Hadid Architects.