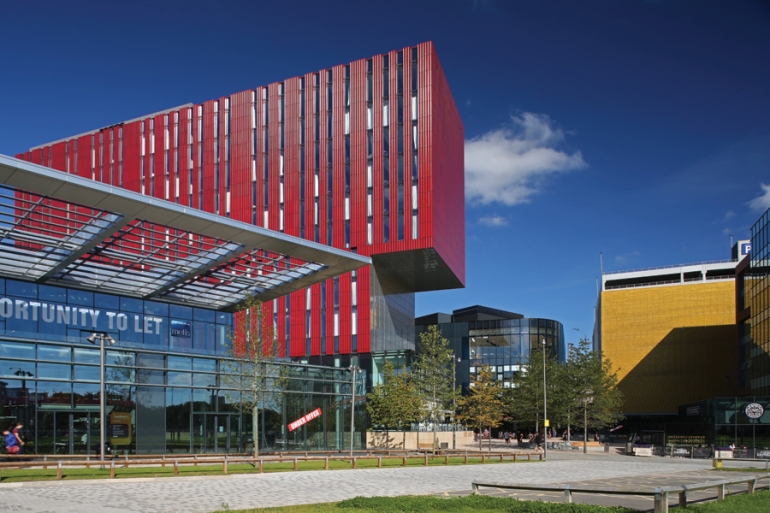 Town’s latest landmark is streets ahead

With an increasing population and a growing economy, Manchester is flying the flag for the North of England as the construction boom sees the creation of a new generation of buildings, and one company that is helping to shape the city’s new landscape is national building envelope and facade specialist, the Lakesmere Group.

akesmere has always had a dedicated operation in the North West but the company’s recent decision to relocate its Warrington office to new premises in Altrincham in Greater Manchester has further strengthened its regional presence and helped expand its order book. One of the company’s recently completed contracts and one of the most exciting schemes to come to fruition as part of the revival of Manchester’s construction activity is First Street, a new creative and commercial cluster that is helping to put the city back on the map.

Boasting a prime location within the regenerated southern gateway to the city, First Street has been created to help breathe new life into the local area and restore the heartbeat of what was once a vibrant centre of industry. The development is anchored by the HOME building, which is the new base for the merged Cornerhouse and Library Theatre Company, and this gives way to a new public square that has been named after Manchester’s legendary music mogul Tony Wilson.

Wates was appointed as the main contractor for the HOME building, with Carillion taking the lead on the construction of the overall scheme that includes a new hotel, car park, retail units, high-end student accommodation and a commercial office building.

Benefitting from the creative direction of project architect SimpsonHaugh and Partners, First Street has been developed by Manchester City Council as part of a joint venture with Ask Developments. Redefining the concept of a mixed-use project, the £80m scheme brings about a unique fusion of commerce, community and creative spaces. The development also features a striking collection of complementary cladding designs that both reflect the individual purpose of the buildings but also adds to the sense of community that is at the very heart of First Street.

Drawing on its multi-sector expertise and varied skillset that include the delivery of the full building envelope, Lakesmere’s scope of works included the facade designs for the scheme’s new hotel, multi-story car park and retail units. The four-star 11-storey Innside hotel, which is part of the internationally recognised Melia chain, is the first of its kind in the UK. The Lakesmere North team undertook the installation of the red glazed terracotta rainscreen panels of the new hotel, which give a nod to the traditional ‘red brick’ properties of the area. As well as being responsible for installation and the seamless integration between the glazing and cladding interfaces, the Lakesmere North team also installed the hotel’s membrane roof and engineered the steel framing for the hotel’s podium block which has been clad in a contrasting black ceramic granite facade system.

The eye-catching terracotta cladding has also been used to create a synergy between the hotel and nearby retail building, which also features a Lakesmere installed Kalzip aluminium roof and bespoke aluminium fascias.

The new 700-space multi-storey car park has been designed to be much more than essential infrastructure and its unique facade creates an interesting addition to the development. Operated by Q-Park, it is also one of the largest car parks in the city centre. Here, Lakesmere has installed a complex package of bespoke ‘gold’ aluminium rainscreen and perforated cladding that wraps around the building to create a sense of light and space. On one elevation, the installation of the perforated aluminium panels was made even more challenging owing to the integration of LED lights.

The breadth of Lakesmere’s roofing and cladding contract at First Street meant that the team was required to work on several different interfaces simultaneously, as well as coordinating with the other trades and contractors working on site. With most of Lakesmere’s work being carried out using mast climbers, attention to health and safety was also paramount.

The successful delivery of the varied contract at First Street is, according to Lakesmere’s Project Director John Dickson, not only testament to the company’s diverse skillset but also showcases how main contractors can benefit from working with specialist contractors that can deliver more than one package of works. John comments: “Mixed-used schemes such as First Street are the ideal fit for us as we are equipped to deliver the full building envelope, have a robust supply chain and knowledge of working with various different products as well as having vast multi-sector experience. This gives our clients the scope to use some or all of our services but increasingly, we are being appointed to deliver the complete envelope including roofing, cladding and glazing packages.

“A key factor in this is that many of our clients are keen to maximise the benefit of limiting the number of subcontractors involved in a project. With fewer trades to coordinate, the project can not only benefit from faster construction programmes but there is also the increased reliability and reassurance of having all work and warranties with the one supplier.”

First Street is also one of the most significant contracts to be delivered by the Lakesmere North team since it relocated to its new regional base in Altrincham and as the company strengthens its links with the local landscape of Manchester, John believes that there’s still plenty of life left in the North West. He continues: “After London helped kick-start recovery in the construction market, it’s great to see this growth spreading to other regional cities such as Birmingham, Leeds and of course Manchester. This is reflected in our order book and as well as working on First Street, we have also recently completed the cladding and curtain wall package at the University of Manchester’s National Graphene Institute alongside McMullen Facades and we are now working together to install the full building envelope at the new Central Square commercial development in Leeds.”

As a great example of a regeneration scheme that aims to benefit both the local community and the regional economy, First Street could also be the start of a new landscape for the city that showcases just what is great about Greater Manchester.