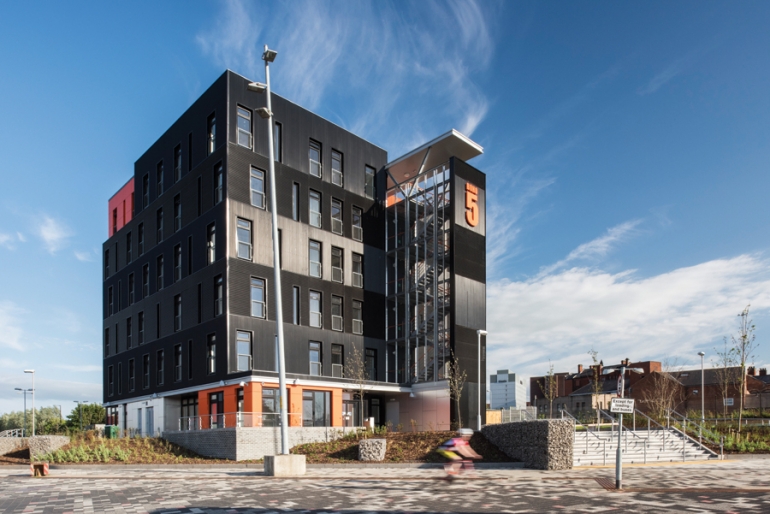 Setting the pace for growth

he concept of the Boho Zone was established in 2005. At that time it was conceived as a loose geography across a series of buildings and potential development sites in the oldest part of the town.

During the 20th century, the area had twice been developed as a housing renewal scheme but persistent social problems and market failure then prompted the local authority to designate uses differently.

Therefore, building on the success of Teesside University’s digital courses and the formation of DigitalCityBusines (DCB) as a platform for creating the further growth of digital media and technology courses, a plan was formed to establish a building infrastructure that would eventually accommodate the full spectrum of start-up to established businesses, while also confirming Boho Zone globally as a brand signal of innovation and quality.

The idea behind Boho Five was first discussed in 2009, shortly after the completion of Boho One, the flagship business accelerator building which is now fully occupied with digital businesses.

Bohouse (Boho Two) is a fully let Live/Work housing scheme for 20 individuals working in digitally-based businesses so that they can live in proximity to the network hub created by Boho One, while Platform Arts (Boho Three) is a complex of artists’ studios and workshops, located in part of Middlesbrough Railway Station.

In nearby Zetland Road, Crown House together with the former bank on Cleveland Street, have both been refurbished to offer commercial office accommodation, the latter being branded Boho Four.

The success of the early stages of the DCB development plus the demand for start-up space, prompted DCB to commission a feasibility study with xsite architecture (xsite), which subsequently led to the Stage D design for Boho Five.

Boho Five has cost circa £4m. It has been developed in partnership by the Homes and Communities Agency (HCA) and Middlesbrough Council both of which are partners in a joint venture covering the regeneration of Middlehaven and St Hilda’s areas (including the Boho Zone) and will operate the building in close partnership with DCB.

As its name suggests, it is the fifth and latest building helping to transform the fortunes of what had been for some years, a neglected and run down corner of Middlesbrough.

Located on a prominent brownfield site within the Boho Zone area, the building acts as a spoke connected to the ‘hub’ provided by Boho One. A business accommodation building, Boho Five sits geographically close to and working in a complementary way with the existing buildings within Middlesbrough’s Boho Zone, providing a seamless offer to cluster companies and potential entrepreneurs.

It is a high quality, innovative building reflecting the aspirations of the digital sector and designed to foster increased collaboration between its occupiers. Specifically, it provides small, flexible incubation space for start-up businesses which will then grow and expand to occupy space in other publicly or privately owned buildings with the area, continuing with the positive redevelopment of the site.

DigitalCity Chief Executive Officer, Mark Elliott, could see that the complete cycle of business development needed to be catered for in the Boho Zone so that young and emerging digital companies could participate in and benefit from the collaborative and nurturing atmosphere being created within the complex.

The feasibility study for Boho Five was commissioned with xsite as a small piece of work which formed a link to our previous Boho work (Boho One, Bohouse and involvement in the original masterplanning).

Discussions between the client and the design team during pre-planning design stages were extremely valuable. DCB and Middlesbrough Council were able to provide feedback and advice in relation to the operation of Boho One and how they believed Boho Five could fit into the Boho Zone network.

Every aspect of the strategy and design for the building had to reflect economy from the outset if the project was to be deemed viable. Middlesbrough Council was looking to provide opportunities to accelerate the development of new and emerging businesses in the digital and creative sectors and identified a gap in the provision of small, front end start-up space.

With an idea of demand already gained from its collective experience of Boho One to Four, together with the knowledge that there was a finite amount of funding available from the HCA and European Regional Development Fund (ERDF), we were then working against the funding deadline – challenges which combined to help shape the brief for the building.

We needed to maximise floor area within an economical building envelope while optimising the building fabric in terms of cost and thermal efficiency with the aim of reducing running costs over the life cycle of the building.

Development of the brief involved creative thinking from both our client and the design team. The approach was very much about exploring the maximum potential of what could be achieved within the site, funding and time constraints.

Referencing the ‘sugar cubes’ envisaged in the original Alsop Middlehaven masterplan of 2003, the starting point for the design was a cubic form, which due to its low surface area to volume ratio, offered a number of environmental and economic benefits in the development of the building.

Within this form, the design team then explored different spatial, structural and services solutions with a view to keeping build costs down and providing the client with a building that was comfortable and simple to use and maintain as well as cost-effective to run.

A key element arising in the development of the brief for Boho Five was the desire for flexibility. In order to achieve a satisfactory office environment, given the prohibitive cost of entirely moveable or operable walls, a flexible approach to the building layout has been employed instead.

Window layouts have been designed to accommodate a number of different workspace sizes in various configurations on each floor – this allows workspaces to grow or contract as necessary throughout the lifetime of the building.

The six-storey building is constructed from steel and concrete and has been carefully designed to minimise carbon footprint in the build and operational phases with photovoltaic panels on the roof contributing to its anticipated BREEAM Very Good rating.

The black profiled metal cladding with its finish changing from matte to gloss on alternate floors works particularly well. As a fairly low cost cladding material more commonly associated with industrial buildings, it has been elevated to something entirely suitable for use in an urban context due to careful consideration of colour, orientation and detail.

Externally the escape staircase, which benefits from specialist lighting to create a beacon effect within the immediate area, is also faced in the black profiled metal cladding with a metal mesh infill to the sides and a solid metal panel infill at ground floor.

When xsite first became involved in the Boho Zone, it was clear that this part of Middlesbrough had a huge potential to drive change and employment in the town. While there have been significant successes over the years, there is still huge potential to both influence and shape the direction and momentum of the place. So while the Boho Zone does not need to expand, its attitudes and influence could show the way for many new developments in Middlehaven that will renew the area and give Middlesbrough a northern centre to be proud of.