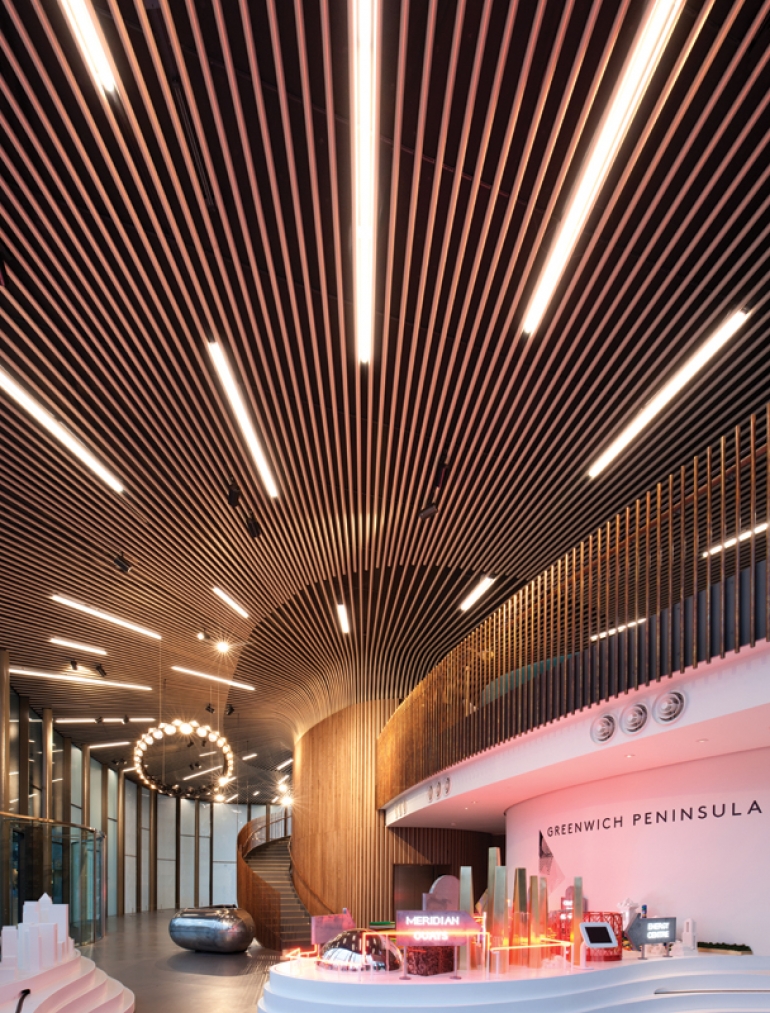 he historical and cultural connections that link Greenwich with ship-building, the sea and maritime navigation are recognised in the project. Drawing on a materials palette of brass, copper, concrete, timber and steel, these connections also inspired the form of the design.

The ability to meet both the form and function of the design was a critical reason SAS International was chosen for the project. Described as taking a marketing suite to a whole new level, the Pavilions act as a shop window to the seven million people who visit Greenwich or pass close by each year.

The brief was also to contribute a high-quality building feature for this emerging part of East London, which could act as an exhibition and event space, and destination in its own right. Inspiration came from the existing Queens House and a simple device of linking the colonnade. A canopy was introduced to link the two buildings to define the edge of the square. The concept for the canopy soffit was to trace a magnetic field pattern linking the ‘poles of attraction’ of each building. The ceiling design was developed by testing the architects’ brief against the various site constraints.

Not only did the canopy need to span both curved glass pavilions externally, but also work as an internal ceiling and wall feature, connecting and flowing between the space seamlessly. SAS Tubeline was a preferred system option as it had the ability to be adapted to the complex building geometry. Because of the proposed curved layout of the canopy and wall integration, standard linear tubes were not an option. SAS produced a product mock-up so that Marks Barfield Architects could see exactly how a bespoke curved Tubeline system could work. This application of the SAS Tubeline system had never been realised previously.

To mirror ‘magnetic forces’, the tubes had to flow from the inside out. Due to the curved layout of the canopy, linear tubes could not be used. The numerous varying curves were rationalised and group batched to make use of the inherent flex in the material, avoiding unnecessary factory set-ups. The extruded tube profiles were factory assembled and bonded together into single straight sections.

Each 22m long section was rolled into the complex spline curve using a specialised CNC Tube Roller capable of rolling varying radii. The profiles were then cut into managable component lengths for coating with ‘Golden Beach’ polyester powder paint. This method ensured a seamless flowing curve after re-assembly on site. The tube profiles had to be manipulated on site during the install.

Accurate tube setting out was achieved by plotting arc coordinates on the suspension grid directly from CAD geometry using the latest Laser Total Station technology. Careful consideration needed to be given to the suspension of both the metal tubes and black fly-mesh specified for the interior and exterior. A mock-up was constructed to demonstrate how the concealed fly-mesh specified would look.

The brackets suspending the tubes away from the fly-mesh had to perform in accordance with high external wind loads, whilst allowing for 150mm deflection across the entire ceiling. A 21mm lipped channel was introduced to the suspension system in areas where the pre-cambered structural steel settled below its designed level. Where thinner channel was used, purlins have been installed to maintain the ceiling height.

As part of this design feature for the interior, alternating vertical tubes and oak slats were specified to help create a warm and welcoming centrepiece in each building. Two different profile shaped oak slats were installed in vertical lengths parallel to the Tubeline. The core wall behind the vertical tubes was painted grey.

This created an aesthetically clean backdrop that would survive wear and tear. Because of the complex curve, to ensure exact spacing between the tubes, a laser cut, curved, castellated suspension plate replaced the channel. The plate allowed for the tube and a corresponding oak section to be clipped into it. This allowed SAS to set out to the accuracy that was required of the base build structure. The horizontal tubes radiate out from this position to realise the striking design, and coated with ‘Golden Beach’ polyester powder paint have the appearance of being made from patinated brass.

It is a common assumption that there are no access options for maintenance with a linear ceiling such as Tubeline as it is perceived as a purely aesthetic feature ceiling.

The Pavilions are fitted with fan air conditioning units, meaning access panels for maintenance were a necessity.

This was considered at design stage, and SAS International manufactured the panels in a trapezoidal form to follow the lines of the tubes. Panels were therefore concealed and did not obstruct the architectural aesthetic, yet allowed easy access for maintenance purposes.

Lighting was a key element due to the various demands of the Pavillion space. Due to the 30kg weight of the spotlight lighting track, design teams had to ensure these increased loads were suspended directly back to the soffit, independent of the ceiling.

Other various light fittings were directly integrated into the Tubeline system. Angles were fixed to the back of the tubes and LED strip lights were bonded onto a top hat section. This adaptable solution allowed the flexibility to span between ever changing tube “gaps”.

The ceiling and wall installation at The Gateway Pavilion involved a team of 12 taking five months overcoming highly complex challenges. An acoustic treatment was specified for the interior of the Pavilions. Acoustic absorption materials were therefore mounted onto the soffits first before the strut channel grid and tubes were installed.

Fitting of the strut channel grid work followed, the position of which was critical to the overall installation. The structure followed an irregular geometry that meant the ceiling could not be set out in a regular manner. To ensure accuracy, detailed preparation and precision were key, working from the internal to external ceiling sections.

The install team had the scale of the Pavilions’ 82m long canopy, (longer than the wing span of an Airbus A380), to consider along with the challenges of working at height. Internally, the ceiling plane is over 7m above ground level.

A high degree of accuracy was critical for each individual fixing point. Precise coordinates were plotted onto the supporting suspension system using a Laser Total Station emitting a point laser, for the exact location of every tenth tube. The tubes, of differing radii, were supplied in batches and individually manipulated on site during the install. Each tube was fixed to the mounting profile with a bracket. The bracket was able to slide both along the mounting and the tube, and also allowed for a 360° rotation about the fixing point. This provided the freedom of movement critical to ensuring the precise installation of each tube.

The end result is a visually stunning, fully bespoke installation that meets the architects’ performance and aesthetic demands without compromise.