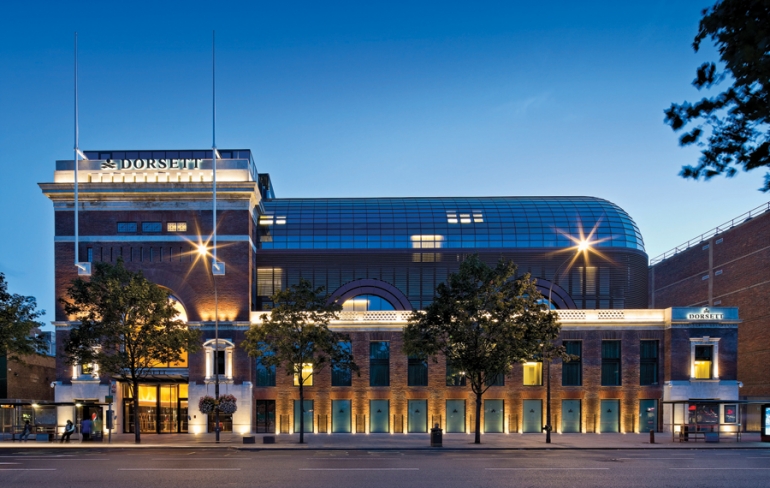 he Pavilion is a Grade II listed building dating from 1923. Designed by Frank Verity and originally constructed as a 3000 seat cinema, the building was awarded the RIBA Award London Street Architecture Award for the best London facade. After heavy damage caused by a V1 flying bomb during World War II, the building was vacant until 1955 when it was restored and reopened as a bingo hall.

Before the recent redevelopment of the building into a hotel, the building had been disused for over a decade and had fallen into a state of disrepair. While the front elevation maintained much of its original design intent, the interiors and the rear facade had been extensively added to and adapted over its lifetime.

The proposal to convert this dilapidated building into a new 4 star hotel presented an ideal opportunity to give a much loved, but neglected building a new lease of life while revitalising and securing the retention of this important heritage asset and landmark on the green.

The new brief called for the conversion into a new four-star, 320 room hotel with associated leisure and retail facilities. This new accommodation was discussed with the Local Authority and was deemed to be suitable due to being sustainable use, but also due to the positive impact on the surrounding environment of Shepherds Bush. The scheme reactivates the streetscape with an active frontage containing a restaurant and cafe with outdoor seating.

The design concept was derived from a detailed understanding of the building’s history and context and the result is a contemporary response that complements and refines the original character of the building. The final scheme retains the original award-winning brick facade, with minor alterations to ensure natural light within the hotel rooms behind, and recreates the original roof form with modern materials. The use of glazed ‘shingles’ as opposed to the original use of metal shingles, while following the original curved profile, again allows light within the upper floors of the scheme, which previously would have been unusable space. The rear of the building, having retained little architectural merit, was replaced with a contemporary version of the main front facade, using similar materials, however visible discernible from the retained facade. The overall scheme is a composition of hierarchy between old and new, both in the facades, but also in the contrast between the inside and outside.

To incorporate the new functions, the interiors of the building were mainly removed. The historic building is once again a prominent landmark on Shepherd’s Bush Green; without the refurbishment and inclusion of a sustainable new use, the future of the building would have been in question due to the state of disrepair.

The conversion and revitalisation of the building exemplifies good practice in managing to maintain an historic asset through the injection of new life and purpose. The conversion not only saved existing building stock within the townscape, it also extended the life of the building through the inclusion of new building materials and a new sustainable use. This new hotel use was acknowledged by the Local Planning Authority to be one of the few sustainable uses for the existing building, with the original uses been seen as not economically viable.

The scheme also forms part of the overall regeneration and re-surgence of Shepherds Bush generally and builds on the upgrading works of the nearby station, Westfield and indeed the green itself, all contributing to the overall sustainability of the Shepherds Bush community and providing a new source of revenue – tourism. The hotel development has also been the catalyst for the re-development of the adjacent Walkabout pub.

The street frontage, which was boarded up for more than a decade has been revitalised through the inclusion of two restaurants on ground floor. This activity provides a new space for the local community and tourists alike to meet whilst providing a destination and focal point for the Green.

In both construction and in operation, the hotel has also generated increased local employment, with circa 90 staff operating in the hotel at any one point on a shift basis.

In addition to the social and economic sustainability of the new hotel, the overall environmental performance of the building was increased as much as possible within the confines of the existing listing.

The environmental performance of the building was improved through the inclusion of new, energy efficient plant and services generally throughout the building. This includes a gas fired CHP system which can be connected to a future heating and cooling network.

In addition, the thermal performance of the existing and new building fabric was substantially improved through the inclusion of additional insulation to the brick facades, high performance glazing and solar shading and improved air permeability.

The proposed measures to reduce the development's CO2 emissions are summarised below:

This inclusive environment is established through a number of inclusions/adaptions to the building. The first being step-free access into and through the building itself. Automatic pass doors are provided at the main entrance, with discreet internal ramps being included where a change in level was unavoidable. The existing main entrance arch suitably identifies the main entrance through the architecture, where a canopy has been provided for protection to users. Lighting also assists with way finding around the site. Coach drop off and two disabled parking bays are provided at the secondary entrance to the building, where level access is provided directly into the building.

The project’s inherent functions including conference facilities, cafe, restaurant, bar and roof-top spa, provides both new employment opportunities for residents as well as new desirable amenities for the local community. Furthermore, these functions will bring additional footfall in an area that had been neglected for decades.