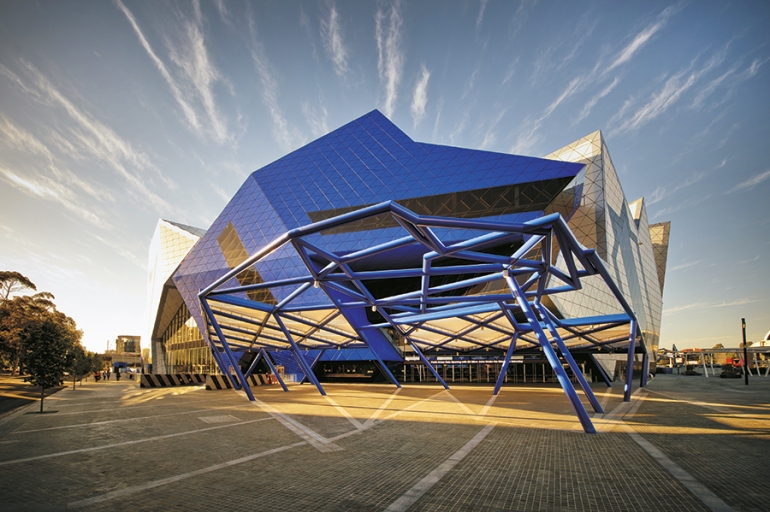 esigned by architects ARM+CCN, a joint venture of ARM Architecture and CCN Architects, Perth Arena is defined by nine unique facades and links the city’s business district with the Northbridge suburb. Its vivid colours and dynamic geometry provide a vibrant and eye-catching new international entertainment venue attracting world-renowned artists to the capital of Western Australia.

Resembling a giant and complex jigsaw puzzle, its design takes inspiration from Christopher Monckton’s Eternity Puzzle, filling an almost regular dodecagon, a polygon with 12 sides and 12 angles with 209 irregularly shaped smaller polygon pieces. Taking the form of interconnecting polygons the facades feature a bespoke curtain wall solution designed and developed by Reynaers and based on the CW 50 Structurally Clamped system.

Development of the bespoke solution was needed for use in the extremely complex inward and outward slopping facade – the irregular shaped elements required custom-made glass support and T-connections in addition to the integration of parallel opening windows. This also necessitated the use of special corner connections, bespoke transoms and mullions. All of this had to be accomplished using slim aluminium profiles so that only minimal aluminium was visible keeping clear lines within the external facade.

As part of the structure mullions of some elements were clamped onto a steel substructure and several different sized elements were produced in irregular shapes, including the parallel opening windows.

An integral part of the development process saw extensive testing of the bespoke curtain wall at the Reynaers Institute test centre. This ensured the system’s ability to withstand all wind loads, thermal and structural movement as well as the system loads imposed by the building’s diagonal transoms.

Glazing on the project is a combination of single and double glazed elements. As with all modern concert venues acoustics are particularly important, with some of the elements including acoustic variants with 32mm spaces and an acoustic layer between the glass panes. Special protection was included on the panels that make up the dramatic slope areas to ensure full system integrity due to the high loads experienced.

The glazing panels are arranged in bold geometric patterns adding to the visual impact created by the building as a whole. This extensive use of glazing, with the addition of strategically placed skylights, ensures internal areas of the venue are both light and airy while delivering a feeling of open spaces with unobstructed views to the surrounding area.

Fundamental to the design concept developed by the architects it was crucial that the glazing had to be as one with the other facade materials, presenting a uniform and uninterrupted exterior. Laced with bold colours blue, white and black, the facades merge seamlessly with cladding in bold geometric patterns while parallel sashes of irregular shaped windows appear almost nonexistent when viewed from the outside. Internally, however, it is a different story as the fenestration highlights the design features while bringing in the all important natural light. This visually stunning achievement led to the building been awarded The Australian Window Association’s ‘Best use of Windows and Doors Commercial – New Construction’ award.

Whether viewed from the grand boulevard to the south or from the elevated roadway to the west, Perth Arena has been designed so that no facade or entrance is seen as more important than another. Its nine unique facades fold over and overlap each other and are broken up by the vivid colours of the external cladding.

As day turns to night a transformation takes place as the arena comes to life with pulsating streaks of light chasing along the clean lines of the building like a huge spacecraft on the landscape it instinctively draws people towards it. The theme is continued on the interior of the arena with entrances, foyers and multi-function spaces displaying splashes of red, orange and yellow on timber panelling to aid zoning and orientation.

Energy efficiency and the environment play a significant role in the day-to-day operation of Perth Arena which utilises mixed-mode natural ventilation aided by the installation of parallel openers in the curtain walling. An expansive roof area accommodates a large photovoltaic array and low energy displacement air conditioning is utilised throughout the venue. With U-values of approximately 1.5 and a Solar Heat Gain Coefficient ranging from 0.23 to 0.6, the CW 50 curtain wall systems assist the building’s energy efficiency.

Contained within the highly complex arena is a concert venue and multi sports stadium with complete flexibility to stage A-listed music concerts alongside international and national sports tournaments, the equal of any venue in the world. In addition to the 15,500 capacity arena topped by a 56m x 35m retractable roof that opens in just seven minutes, there are five high quality and distinctive function areas, 36 corporate suites, six food and beverage outlets and a 686-bay underground car park. All are interlinked by vast 50m high atriums and walkways for ease of navigation throughout the arena complex.

Built at a cost of A$548.7 million (£350 million), the 28,000m² arena, is already home to the Perth basketball team, the Wildcats, and the Hopeman Cup international tennis tournament. International artists have already graced the stage and The Eagles, Drake, Billy Connolly, Kylie, Rod Stewart and Ed Sheeran are all set to perform there clearly putting the Perth Arena on the international entertainment venue map.

The visually striking venue is down to the architects designing an impressive, flexible concert venue and sports stadium with no fewer than 9,800 triangular panels and one thousand rectangular panels make up the exterior and its sheer multi-functionality makes Perth Arena an impressive giant 3-D puzzle and fascinating piece of architecture.