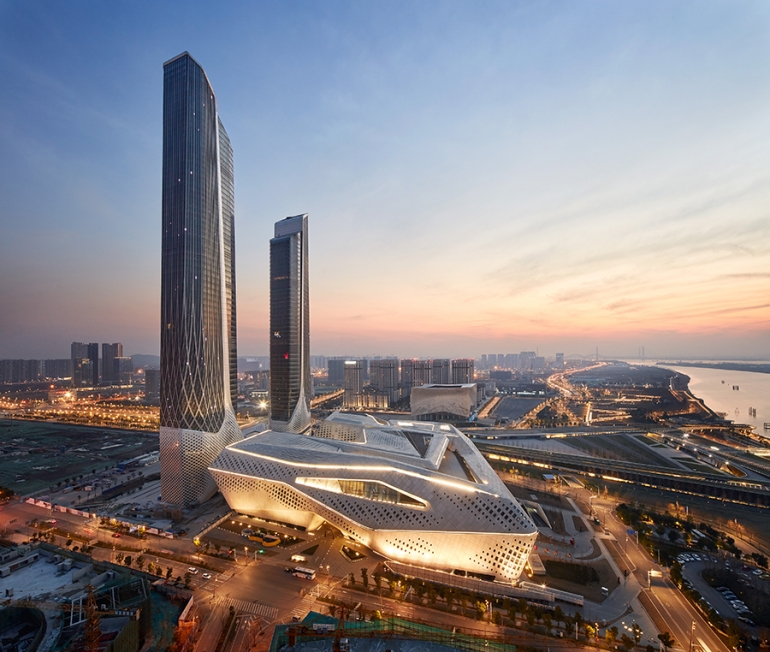 Located on the river in Hexi New Town – Nanjing’s new central business district (CBD) – majestically stands another masterpiece from the house of Hadid. The Nanjing International Youth Cultural Centre subtly lives up to the enchantress of architecture Hadid’s nickname, the ‘queen of curves’.

he Nanjing International Youth Cultural Centre harnessed the energy of the 2014 Youth Olympic Games to create a project with a lasting legacy that has enhanced and also regenerated its setting – acting as both an anchor and a catalyst for future investment in Nanjing’s Hexi New Town.

Comprising two hotel towers that include the new Jumeirah Nanjing, a cultural centre with conference facilities, an urban plaza, offices and mixed-use areas, the development initially provided accommodation for the 2014 Youth Olympic Games. Now in its legacy stage, the centre has fostered investment in Hexi New Town on multiple levels; integrating additional infrastructure with new functions that include the hotels and a venue for Jiangsu province’s annual conferences. Some of these functions, such as the footbridge connecting the city to the rural landscapes of Jiangxinzhou Island in the Yangtze River, are expressed. Others, such as burying the existing expressway below ground to create a new riverside park, are now hidden. The four elements of the cultural centre (conference hall, auditorium, shops and guest zones) are independent volumes surrounding the central courtyard. These four elements merge into a singular whole at higher levels, enabling pedestrians to walk through an open landscape at ground level. The conference hall seats 2100 and is equipped with a multi-purpose proscenium stage suitable for conferences, cultural and theatrical events, while the auditorium seats 500.

The cultural centre’s design is a three-dimensional calligraphic composition that resonates with Nanjing’s 1600-year-old tradition of Yunjin – the name given to the intricate brocade threading used by local craftsmen to weave the region’s acclaimed gold and silver fabrics. Like Yunjin thread, a continuous line interweaves throughout the cultural centre connecting it with its earthquake-resistant towers and beyond to the new central business district, riverside park and Jiangxinzhou Island.

The tapering profiles of the towers, at 255 and 315m – Zaha Hadid Architects’ tallest completed towers to date – extend the viewer’s sense of perspective. The towers’ trapezoidal floorplans maximise their river-facing frontages, and double-decked elevators increase the efficiency of their core area planning by 50%. The cross-sectional geometry of the towers ensures an average net-to-gross ratio of over 70%.

High standards in the quality and performance of the centre’s interior environments are achieved by bringing natural light into the deep-plan spaces of the conference centre and minimising the need to augment daylight by avoiding tinted glass. Office spaces combine mechanical and natural ventilation which, along with high-level gardens, enhance the user experience. Efficient cooling and heating strategies, optimal passive design orientation, flexible planning and self-cleaning facades are used to maximise the project’s design life.

Driven by the milestone of the 2014 Youth Olympic Games, for which the development provided venues and competitors’ accommodation, the centre’s construction operations set records and demonstrated the whole project team’s expertise.

Mainland China’s first completely top-down/bottom-up tower construction, combining above- and below-ground construction with extensive design work proceeding in parallel, the project’s construction programme was reduced by a full year. The entire centre was completed just 34 months after design began with all works on site lasting a mere 18 months.

The Nanjing International Youth Cultural Centre’s architecture is defined by its location at the intersection of an important urban axis and the Yangtze River, as well as its location at the junction between the city’s urban fabric and the natural landscapes of the parks that line the riverside. With its popular 2100-seat theatre and the new Jumeirah Hotel, the Nanjing International Youth Cultural Centre has been a vital catalyst for investment in Hexi New Town’s civic infrastructure; an excellent legacy of the 2014 Youth Olympic Games.