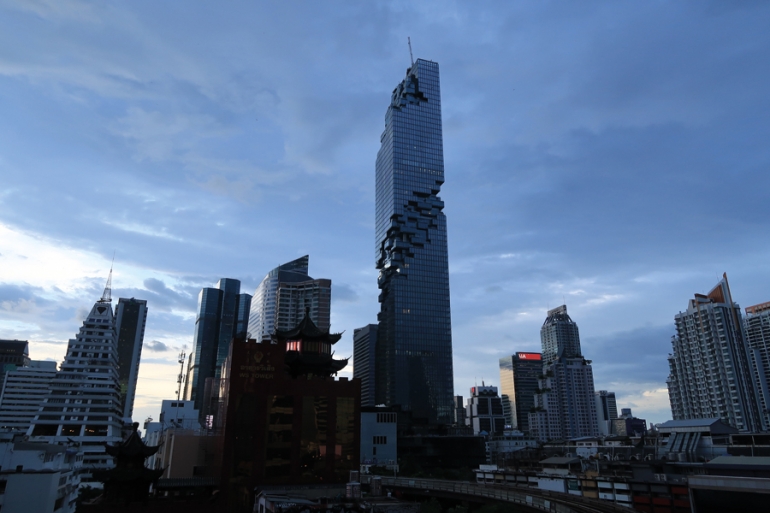 Temples and dream beaches with turquoise-blue water make Thailand a sought-after destination for tourists from all over the world. The capital Bangkok, with a population of some nine million, is a city of contrasts with irresistible magic. In contrast to many other Asian megacities, however, the city has few contemporary architectural highlights. The German Architect Ole Scheeren created Bangkok’s new landmark in the form of the 314m-high MahaNakhon.

gently spiralling, perforated belt of glass balconies and terraces forming a staggered arrangement gives the reflective louvred facade its unmistakable, pixelated face. The MahaNakhon is complemented by the seven-storey shopping temple, Cube, and a fully automated parking garage. For the cladding of the parking garage, the architect chose PC-Sambesi metal mesh from GKD (Gebr. Kufferath AG). Alongside the extraordinary aesthetics, its proven low-maintenance solar protection and reliable fall guard protection properties were crucial factors behind this decision.

In Bangkok, facets of village and megacity, Buddhism and business are thrown together in a seemingly random way to form a fascinating mix of cosmopolitan flair and centuries-old traditions. The formerly quiet residential city was transformed into a pulsating metropolis that is home to millions of people in just six centuries. Since the 1980s, fully air-conditioned office towers, malls and apartment blocks have been shooting up like mushrooms. Today, the hectic Asian way of life dominates Buddhist tranquillity. This contrasting nature is reflected everywhere in the face of the city. Alongside the Grand Palace, more than 400 temples bear witness to the rich culture of the capital, which stand side-by-side with Chinese pagodas, colonial-style buildings, dreary tin huts and gigantic glass malls. Scattered prestige buildings such as the 20-storey Robot Building, the Nation Tower, the colours and form of which recall Cubism, or the naive-looking Elephant Building, complete the city’s chaotic skyline.

When commissioning the MahaNakhon, the building owner, PACE Development Corporation, desired a building that sets an outstanding architectural highlight while also being integrated into the city as a public place and a worthy addition to Bangkok’s contradictory mix of tradition and modernity. Ole Scheeren took up the exuberant dynamics of the metropolis in his design and created a new urban centre across an area of 135,000m².

This is also reflected by its name, MahaNakhon, which means 'big city'. The three-part complex – consisting of the tower itself, the Cube and a parking tower – graces the city’s financial district. Across 77 floors, the tower offers space for 209 luxury apartments with between 125 and 830m², 155 hotel rooms and numerous shops and restaurants. A particular highlight is the 3500m² Skybar which grants previously unknown views of Bangkok from a height of 300m. However, the MahaNakhon’s character as a new icon of the city is due to the staggered glass balconies and terraces, which give the giant the feel of an incomplete building with a vertical twist. From a distance, the fragmented pixel belt resembles a helix – an association that was consciously chosen by the architect as a synonym for genesis and development. At the same time, he uses the image of the seemingly randomly arranged pixels to visualise the intricacy and chaotic dynamics of the urban structure. The apparently missing pixels also give the viewer the feeling that they are peering into the interior of the building.

The future of parking

The winding pixelated belt of the tower, which starts at the peak of the tower, ends at the spacious indoor and outdoor terraces in the sales and gastronomic area on the lowest seven floors of the MahaNakhon. Together with the exterior of the neighbouring Cube mall, they form an outdoor atrium as a public event location. A parking tower rises behind the Cube, offering space for almost 900 cars over 10,400m² with an automated parking and retrieval system. In order to adapt the appearance of this structure to the luxurious overall ambience, the architect chose shimmering PC-Sambesi stainless steel mesh from GKD for the cladding. A total of 464 framed mesh panels, each 2.9m high and up to 1.8m wide, subtly take up the visual appearance of the louvred facade of the MahaNakhon. As a discreet companion to the reflective surface of the tower, they also reflect the surroundings and the frequently changing sky that is a feature of the country. Some 2100m² of rigid mesh lend the parking garage an elegant look. In addition to the high-quality appearance of the metallic skin, the architect was also convinced by the ease with which the cladding can be maintained. The attractive shell fulfils two functional roles; it serves as reliable fall guard protection on all floors, while also playing a key role in supporting the environmentally-friendly overall concept of the MahaNakhon complex. In the tropical climate of Bangkok, the light- and air-permeable membrane proves its worth as an effective solar protection solution, which also enables natural climate control of the parking tower. Because daylight can enter the building freely, less electric lighting is required. In monsoon seasons, the mesh also protects the parked vehicles from driving rain. The stainless steel, which is almost 100% recyclable at the end of its service life, also improves the ecological footprint of the building complex. The MahaNakhon was opened in August 2016 in the heart of Bangkok following an eight-year planning and construction phase. Today, the country’s tallest building is constantly in dialogue with the city and its people. As such, Bangkok’s new landmark links opportunities for identification and participation with the role of an ambassador for a city on the rise.