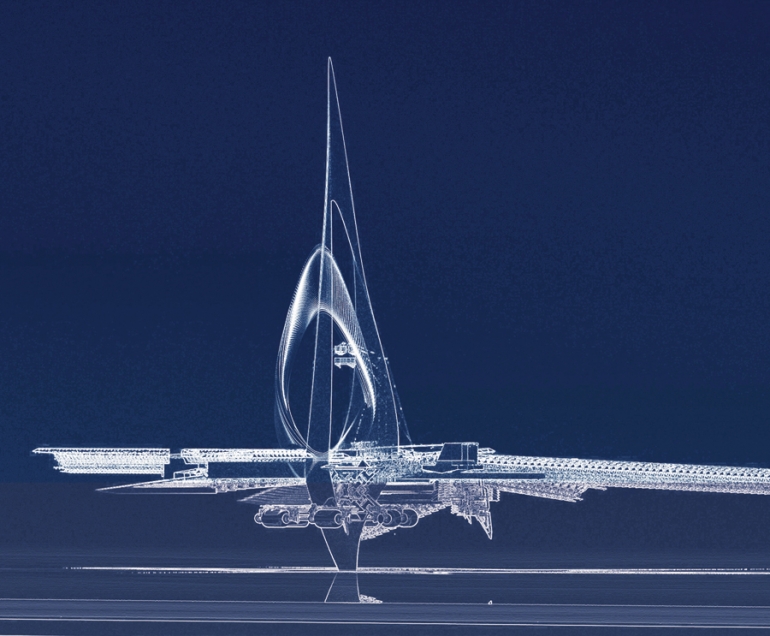 Dubbed a ‘modern ghost town’, ‘stillborn city’ and ‘failed utopia’ due to its abundance of infrastructure yet lack of migrants and business back in 2009, Ordos City’s population today has indeed grown since the media’s judgements nine years ago. So much so that the Ordos City Government has commissioned London-based experimental Architect Margot Krasojevic to design an out-of-this-world pedestrian bridge crossing the Wulanmulun River.

he bridge consists of a main floating section which gives buoyant support to three expanding walkways, and a carbon fibre triple sail which is raised and lowered by the buoyancy rotator. The bridge is a flexible structure that can relocate by sailing along the river to its new position. To do so, it folds into multiple sections that stack into each other.

A hydraulic telescopic secondary structure supports the pedestrian walkway. Expanding and contracting into the main body of the primary structure, its movement depends on where the sailboat bridge is berthed or sailing to.

The bridge can be moored along the quayside, sailed into any location along the river or permanently positioned using caisson foundations which are floated and sunk into position, thus stabilising the bridge. Screw-in moorings, along with nine-tonne anchors, provide further stability to prevent drift.

The bridge’s flexible walkways adapt to different quays and span across the river, expanding and folding accordingly. The hydraulic walkway is supported by the river bank’s landing docks while the main body of the bridge is kept afloat by the sail and its rotator. The walkway’s and the ring frame’s weight distributions prevent capsizing. The primary ring frame has eight marine floatation airbags to further stabilise the sail rotation.

The sails are made of lightweight aluminium frame, clad in a carbon fibre reinforced polymer. They are suspended from a rotating mobius ballast chamber which is hydraulically operated by a thruster to rotate and fill with water in order to revolve the sail and relocate the bridge. The rotating mobius element is made from lightweight aluminium enveloped in stabiliser fins and photovoltaic cells which power the thruster. It consists of five ballast tanks which fill with water and rotate the sail from horizontal to vertical. The other four tanks are left filled with air so that the sail remains buoyant when used either as a bridge or sailed to a new position.

An array of cylindrical cross flow turbines skim the water’s surface. Acting as a raft, their buoyancy helps support and stabilise the bridge’s primary structure.

When the bridge is in use, the sail is lowered and acts as a canopy over a seated area for people to enjoy the views and the platform gardens. The bridge unhinges from the hydraulic triangular section ring frame and rotates into a vertical position in order to sail down the river.

Solar panels line the walkway providing energy for the three electric motor generators. The bridge can be towed, sailed or motored into different locations along the Wulanmulun River.