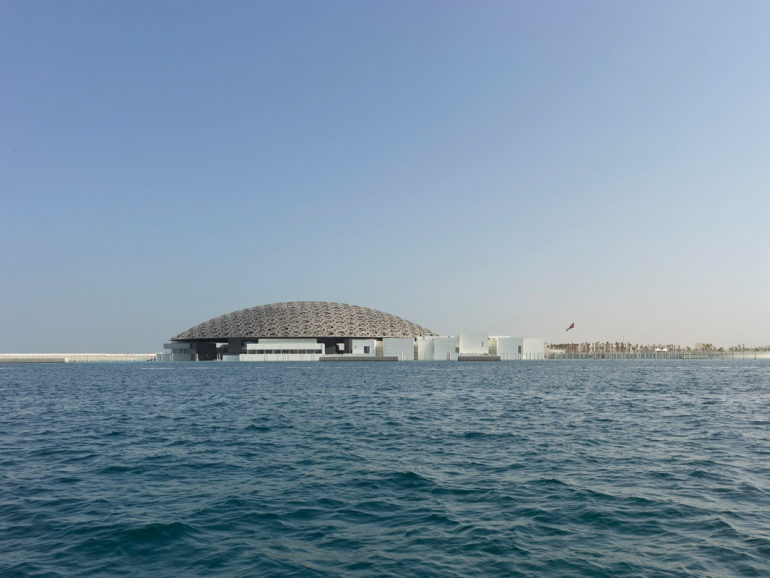 The much-anticipated Louvre Abu Dhabi opened to the public on November 11th last year, with a spectacular week-long series of celebrations. Designed by French Architect Jean Nouvel, the spectacular design of Louvre Abu Dhabi’s dome forms a cluster of stars when illuminated, lighting up the night sky.

t is the first museum of its kind in the Arab region and offers a new perspective on the history of art in a globalised world. An iconic architectural masterpiece designed by Jean Nouvel, it is located on the waterfront in Abu Dhabi’s cultural district on Saadiyat Island. The inaugural installation in its spacious collection galleries will present 600 works of art, half from its own rich holdings and half consisting of stellar works visiting from its 13 partner museums in France.

Louvre Abu Dhabi is the result of a unique collaboration between Abu Dhabi, the capital of the United Arab Emirates (UAE), and France. The museum’s collection spans the history of humanity and will explore a universal narrative through artworks and artefacts from all over the world.

Pritzker-prize-winning Architect Jean Nouvel sought inspiration for the concept of Louvre Abu Dhabi in traditional Arabic architectural culture and designed Louvre Abu Dhabi as a ‘museum city’ in the sea. Its contrasting series of white buildings take inspiration from the medina and low-lying Arab settlements. In total, 55 individual but connected buildings, including 26 galleries, make up this museum city. The facades of the buildings are made up of 3900 panels of ultra-high performance fibre concrete (UHPC).

The museum design is a collaboration between traditional design and modern construction techniques. The tranquil environment encourages visitors to enjoy the ever-changing relationship between the sun and the dome and between sea, buildings and land.

A vast dome, 180m in diameter, covers the majority of the museum city. This impressive structure is visible from the sea, the surrounding areas and Abu Dhabi city centre. Constructed by Waagner Biro (a specialist in steel structures), the dome consists of eight different layers: four outer layers clad in stainless steel and four inner layers clad in aluminium, separated by a steel frame 5m high. The frame is made of 10,000 structural components pre-assembled into 85 super-sized elements, each weighing on average 50 tonnes.

The dome’s complex pattern is the result of a highly studied geometric design. The pattern is repeated at various sizes and angles in the eight superimposed layers. Each ray of light penetrates the eight layers before appearing or disappearing. The result is a cinematic ‘rain of light’ effect as the sun’s path progresses throughout the day. At night, it forms 7850 stars visible from both inside and out. This ‘rain of light’ effect has been the subject of many models and mock-ups over the years and is one of the defining features of the concept.

The dome is supported by four permanent piers, each 110m apart, hidden within the museum buildings to give the impression that the dome is floating. The interior dome elevation is 29m from the ground floor to the underside of the cladding. The highest point of the dome is 40m above sea level and 36m above ground floor level.

Louvre Abu Dhabi’s complex engineering concept has made it one of the most innovative and challenging museum projects built in recent times.

Jean Nouvel has designed Louvre Abu Dhabi as a museum city (medina) which combines traditional Arabic inspiration with contemporary design and cutting-edge energy-efficient engineering. Visitors can walk along promenades overlooking the sea underneath the iconic dome, comprising 7850 unique metal stars set in a complex geometric pattern. When sunlight filters through, it creates a moving ‘rain of light’, reminiscent of the overlapping palm trees in the UAE’s oases.

Jean Nouvel commented: “Louvre Abu Dhabi embodies an exceptional programme in the literal sense of the word. Its vocation is now to express what is universal throughout the ages. Its architecture makes it a place of convergence and correlation between the immense sky, the sea horizon and the territory of the desert. Its dome and cupola imprint the space with the consciousness of time and of the moment through an evocative light of a spirituality that is its own.

“All climates like exceptions. Warmer when it is cold. Cooler in the tropics. People do not resist thermal shock well. Nor do works of art. Such elementary observations have influenced Louvre Abu Dhabi. It wishes to create a welcoming world serenely combining light and shadow, reflection and calm. It wishes to belong to a country, to its history, to its geography without becoming a flat translation, the pleonasm that results in boredom and convention. It also aims at emphasising the fascination generated by rare encounters.

“It is rather unusual to find a built archipelago in the sea. It is even more uncommon to see that it is protected by a parasol creating a rain of light.

“The possibility of accessing the museum by boat or finding a pontoon to reach it by foot from the shore is equally extraordinary, before being welcomed like a much-awaited visitor willing to see unique collections, linger in tempting bookstores, or taste local teas, coffees and delicacies.

“It is both a calm and complex place. A contrast amongst a series of museums that cultivate their differences and their authenticities.

“It is a project founded on a major symbol of Arab architecture: the dome. But here, with its evident shift from tradition, the dome is a modern proposal.

“A double dome 180m in diameter, offering horizontal, perfectly radiating geometry, a randomly perforated woven material, providing shade punctuated by bursts of sun. The dome gleams in the Abu Dhabi sunshine. At night, this protected landscape is an oasis of light under a starry dome.

“Louvre Abu Dhabi becomes the final destination of an urban promenade, a garden on the coast, a cool haven, a shelter of light during the day and evening, its aesthetic consistent with its role as a sanctuary for the most precious works of art.”