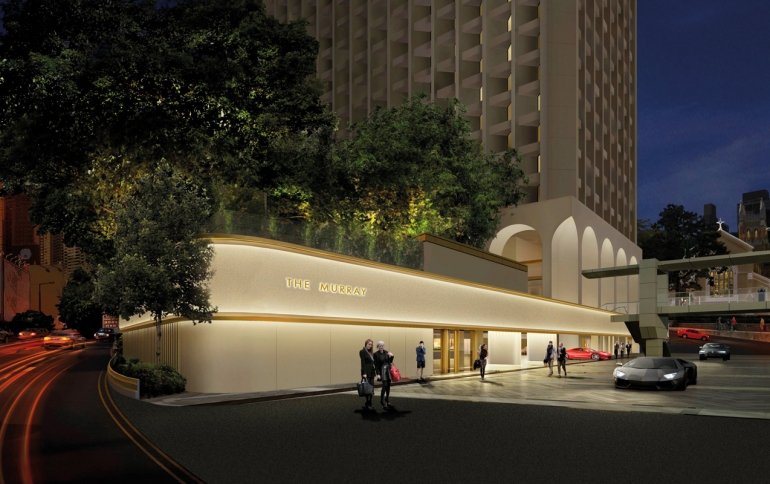 The Murray, Hong Kong – a Niccolo Hotel – has unveiled its new design by Foster + Partners, a global studio for architecture, urbanism and design. Set to redefine the luxury hospitality scene when it opens in January, the iconic landmark will be transformed into an international luxury hotel. The practice has been responsible for the restoration and renewal of the emblematic building – including its interiors, creating a unique destination for Hong Kong.

efined by its distinctive three-storey arches and unique recessed windows, the original structure was designed by British Modernist Architect, Ron Phillips, in 1969 and is seen as an early pioneer in sustainable and energy-efficient design. Led by Colin Ward in Hong Kong and Armstrong Yakubu in London, Partners at Foster + Partners, the new design retains elements of tradition and adapts to the needs of sophisticated contemporary living and discerning global travellers.

What were your first thoughts when you saw the Murray Building?

Colin Ward: Built in the 1970s, the Murray Building is an iconic landmark. A distinctive presence on the city’s skyline with its deep square punched windows, brilliant white facade and majestic arches at ground level, it offered us a fantastic opportunity to work with an important part of the city’s architectural heritage. The building is also an early exemplar of sustainable design and is inextricably linked with the green network of the city, located in between Hong Kong Park and the Botanical Gardens. We were extremely excited to take on the challenge to renew and adapt a Government office building into a unique luxury destination.

What are the interesting elements behind a preservation project that you won’t be able to experience with an entirely new building?

Colin Ward: We always wanted to create a dialogue between the old and the new – a building that is familiar but has been given a new lease of life and a new purpose. Our design intent for The Murray has been to rediscover the romance of going to a hotel. Most new-build city hotels nowadays are relatively anonymous; however, the 1970s building by Ron Phillips and his team at the Architectural Services Department gives The Murray a unique sense of character. Revealing a real sense of arrival, a private forecourt with the historic cotton tree at its centre forms the hotel drop-off and entrance. From here, the visitors walk through the majestic arches rising three storeys from the ground level into the hotel lobby. An elegant staircase connects to the garden level encompassing a beautiful lounge and restaurant. Eight large lifts take guests to the upper levels which contain the guest rooms, where the strong geometry of the facade frames stunning views of the Hong Kong skyline and the lush gardens that surround the site.

Foster + Partners has completed a number of preservation and adaptive re-use projects. Which past project/s has influenced the firm’s sense of design as it is applied to The Murray?

Colin Ward: Our endeavour is always to design a building that relates to its immediate context, especially within a dense urban scenario. The Murray builds on our urban design experience, with projects such as Trafalgar Square and the Great Court at the British Museum, which sought to knit the city together by creating pedestrian connections that enlivened the space. Similar to The Murray, these projects embodied a sense of reinvention, creating a new dialogue between the old and new and bringing forward a centrally-located luxury hospitality venue with a degree of invigoration.

A former Government building, the Murray Building had been fenced off from the surrounding areas for many years for security reasons. It was also designed at a time when the city was planned around the car and consequently stands on an island site, surrounded by roads making it impermeable for pedestrians. One of the central aims of the project was to reconnect the building with the city at ground level, creating a new street frontage on Garden Road, with open routes at ground level. There are transparent and welcoming ground floor spaces, and enhancing and extending the landscaped grounds. The rooftop too has been designed as a transparent glass pavilion on a roof terrace with a bar and cafe overlooking the city.

The Murray sits next to some of Hong Kong’s iconic skyscrapers and is likely the last luxury hotel site in Central Hong Kong. What are some of the most important factors you considered in the re-design and preservation of this iconic landmark?

Colin Ward: Our primary focus has been to enhance the relationship of the building with the surrounding landscape; the ground plane is much more important than the height of the building. The design, therefore, opens up the base of the building, creating new connections between Hong Kong Park and the Botanical Gardens. Also, the Murray Building is modestly tall by Hong Kong standards. In fact, it is surrounded by much taller buildings and overlooked by many from quite a distance. The roof, being lower than the other buildings, forms a ‘fifth elevation’, with many people looking down to the site from the surrounding areas. With this in mind, we designed the roof terrace as a continuation of the green landscape, hence it becomes the centre of attraction.

The Murray is intended to become a contemporary, urban chic hotel in the heart of one of the world’s business capitals. What elements did you use to convey this style?

Armstrong Yakubu: We wanted our design to express a sense of integrity. We have stripped the building back to its original form, revealing the clean lines and volumes that are characteristic of the Murray Building. We have carefully intervened within the historic fabric to bring the building up to modern-day environmental and technical standards without losing its unique identity. Our design also takes advantage of the building’s geometry to create uniquely orientated room layouts that will give The Murray a distinctive character. The base of the building, once meant solely for the motor car, has been reinvented to link with the surrounding landscape, together with a series of social spaces, all under the arches. The interiors are open and transparent, with carefully considered proportions, and infused with materials, furniture and art that evoke an inherent sense of elegance and beauty.

What materials are prevalent and dominant throughout the interiors of the building, and what effect do you hope to achieve with the use of such materials?

Armstrong Yakubu: The concept was to showcase the inherent beauty of the materials – there are no applied finishes such as paint; all the materials are expressed honestly and come together to redefine luxury. We have used a luxurious palette of materials throughout that conveys a sense of exclusivity and elegance. To evoke a contemporary aesthetic, white and black marble floors are paired with polished metals and feature a signature ‘bronze’ stainless steel finish.

What are some of the developments and changes you have seen in the hospitality industry and how have these influenced your design of The Murray’s rooms and suites?

Armstrong Yakubu: We think very few hotels are able to offer a unique experience to their guests, which is the prime focus of the contemporary leisure industry. Most new hotels today are buried within mixed-use buildings. The Murray recalls the tradition of the grand hotels and in doing so creates a distinctive presence on Hong Kong Island. It also seeks to redefine the idea of luxury, which is about a generosity of space, and an inherent understanding of how the hotel responds to the needs of the guest. We wanted to create a true experience that was seamless throughout the entire building – from how one travels through the building, from a guest’s perspective, to the services and finishes, that will be visible to all members of staff working in the hotel day and night, which all comes together within one holistic vision for The Murray.

When the hotel opens, and you had to choose only one physical element that encapsulates the essence of what The Murray stands for, what would that be?

Armstrong Yakubu: If there is one element that unifies the most successful hotels in the world, it would be the grand arrival sequence. While The Murray owns its driveway, it is the arches at the base of the hotel that symbolise the welcoming nature of the building, stitching together this part of the city with amazing new public spaces for the people of Hong Kong and visitors from across the world. But, it would be remiss of me not to mention the heritage tree that Cotton Tree Drive derives its name from, which forms the central focus of the arrival sequence through the hotel. The arches frame the magnificent old cotton tree as guests drive up to the drop-off, creating a memorable and unique experience for all.