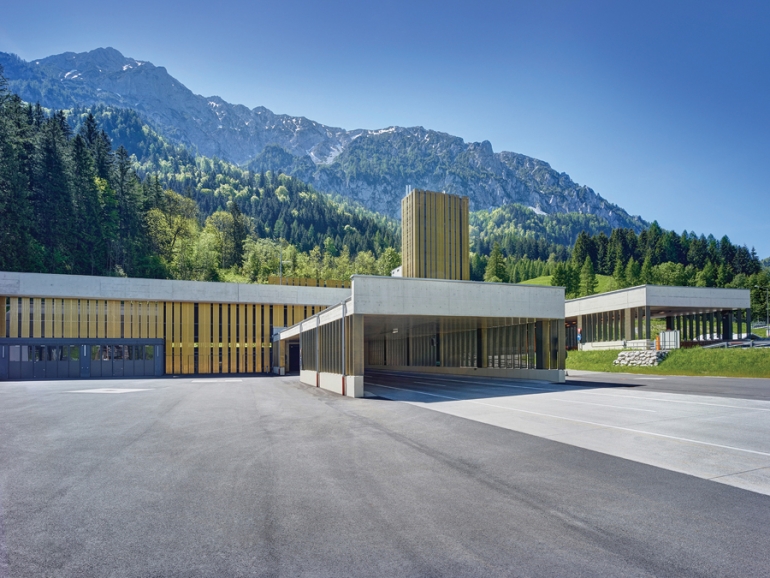 Road and rail tunnels are not often associated with inspirational design but this tunnel portal building in Austria, defined by perforated Nordic Brass copper alloy from Aurubis, heralds a new role in this typology for architects.

ne of the most important and heavily-used connections to south east Europe, the 5.5km-long Bosruck Tunnel passes through the Ennstal Alps, connecting upper Austria with Styria. The original, two-way traffic tunnel has been extensively renovated and a second new tunnel built alongside. Reopened at the end of 2015, the tunnels now form part of the A9 Pyhrn motorway used by around 18,000 vehicles each day and are fitted with the most modern safety equipment.

This impressive engineering feat is celebrated by new gateway structures for the tunnels, to an award-winning design by Architect, Peter Riepl. The architectural competition sought to unite a cluster of highly diverse, existing utilitarian buildings, together with new facilities to generate a clear, impressive visual image for travellers passing through. The new design reduces the complex to two elements: monolithic concrete structures and transparent vertical Nordic Brass screens.

The highly architectonic approach taken is unusual for projects of this kind, suggesting a new building typology in celebration of transport infrastructure. Of course, precedents can be found with the architectural treatments of 19th-century railway tunnel entrances presented as Gothic castles or classical edifices. But at Bosruck, the architecture is thoroughly contemporary. A single concrete portal spans the whole building with a demonstrative lightness, mirrored by two ‘flying roofs’ announcing the entrance and exit tunnels.

Then, the design strategy becomes almost literally theatrical. The series of screens – or ‘stage flats’ – effectively conceal the complexity of the buildings and equipment essential to the tunnel’s operation and safety. They accommodate and disguise a variety of openings, and also form the prominent central tower for the tunnel’s ventilation system.

Made up of Nordic Brass cassettes with varied perforations, profiled and arranged to reflect the verticality of the surroundings, the screens impose a visual order and clarity in front of these disparate elements. But, at the same time, they retain glimpses of what is beyond together with a transparency and openness symbolic of the now barrier-free connection between the two federal provinces.

The rhythms of the vertical Nordic Brass screens highlight the dramatic experience for travellers as they approach and drive through the building via the flying roof-topped entrance and exit galleries. Here, intermittent Nordic Brass screen facades moderate the daylight, creating transition spaces between inside and out. This light touch approach belies the permanent nature of the structures and technical demands of such a challenging environment.

The architect’s selection of metal references the long history of iron processing in the Eisenwurzen area located nearby. But Nordic Brass was also specifically chosen for its long-life and durability, including resistance to road salt, after running a corrosion trial simulating the exposure of the material over 30 years. The Bosruck Tunnel Portal has recently been shortlisted for the 2017 European Copper in Architecture Awards.

Nordic Brass is an alloy of copper and zinc. Initially with a distinctive golden-yellow colour, when exposed to the atmosphere, the surface begins to darken within weeks and can change to a dark brown in around a year. The latest addition to the range is a pre-weathered surface for Nordic Brass.

Nordic Brass is produced by Aurubis, part of a world-leading integrated copper group and largest copper recycler. Other traditional alloys include Nordic Bronze, initially with a similar colour to standard copper. When exposed to the atmosphere, the surface gradually changes to a stable, dark chocolate brown. Aurubis also offers the innovative Nordic Royal, an alloy of copper with aluminium and zinc, giving it a rich golden through-colour and making it very stable. It has a thin protective oxide layer containing all three alloy elements when produced. As a result, the surface retains its golden colour and simply loses some of its sheen over time, as the oxide layer thickens with exposure to the atmosphere to give a matt finish. Unlike most copper alloys and surfaces, it does not develop a blue or green patina.

Copper is one of our oldest building materials with unique properties. Its surface finishes develop naturally over time, unlike other materials that aim to copy them. The Aurubis architectural range provides instant surfaces that otherwise would take years to develop in the atmosphere – particularly on vertical facades. The processes involved are generally similar to those taking place over time in the open, utilising copper mineral compounds, not alien chemical processes.

Essentially, they bring forward environmental changes without taking away the integrity of copper as a natural, living material. All these surfaces form an integral part of the copper, generally continuing to change over time, and are not lifeless coatings or paint. The material is easily bent and formed, and there are no limitations on the length of copper sheet or strip because whole coils are treated on the production line, not just limited size sheets.