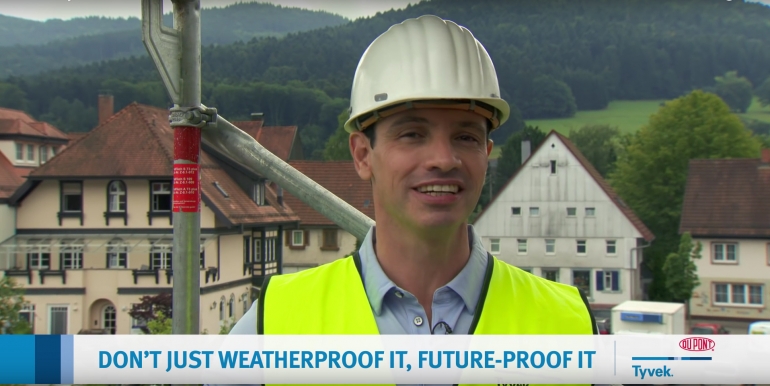 The most important anti-ageing product you can use?

One that will keep your reputation watertight for the long term.

• The primary quality in terms of longevity for a roofing underlay is water tightness – an area which presents the most risk for property, insurance and reputations
• An independent expert opened up 30 roofs to undertake rigorous watertightness tests on roofing underlays after ‘real world’ ageing
• 17 Roofs installed with Tyvek® over 20 years ago and 13 roofs with multi-layer or coated roofing underlays installed between 5 and 10 years ago were investigated
• The independent test reporting went beyond the limitations of current standards to check the precise scale of performance
• Results show troubling failures in watertightness in most of the alternative roofing underlays tested
• The industry’s reputation and home owners investments are at risk as current standards with focus on mechanical stress don’t fully represent reality

Concerned by multiple reports of some alternative vapour-open underlays failing in their secondary water shedding role, DuPont™ Tyvek® instigated a thorough investigation into ‘real world’ performance. When the reputation of a whole class of roofing underlays is at risk because of water tightness failure in some products unable to withstand heat or UV stress, it’s time for the market leader to address the issue.

Independent expert Martin Peifer of German consultants Steildach-Technik opened up 30 roofs to take away underlay samples which the Kiwa GmbH TBU laboratory then tested in ways that exceed the limitations of current water tightness pass/fail classifications.

As building and industry codes have been working hard to catch up with a rapidly evolving market, assessment methods such as those within standard EN13859-1&2, still lag behind in evaluating vital issues such as actual longevity. Qualities such as long term waterhold – which most crucially affects the homeowner – must be assessed after exposure to natural environmental stresses, both during the build and when occupied.

While ageing of underlays can positively affect vapour diffusion with increased porosity, this may adversely affect the water shedding function, should the primary covering fail. This unfortunate occurrence is becoming more prevalent in today’s increasingly stormier weather. Ultimately, the primary quality in terms of longevity is water tightness – an area which presents the most risk for property, insurance, and reputations.

First the basic EN13859-1&2 W1 classification system for watertightness was used: each specimen was exposed to a 20cm water column for 2 hours to measure not only whether any leakage occurred, but how much, over what surface area and how quickly. In parallel a graded system over a scale of 10 (1 being the worst performance, 10 the best) was appplied to differentate between the failing specimens.(see pictures) The EN20811 method for evaluating resistance to water penetration in textiles was also used. This established, in crucial and revealing detail, precisely how well each underlay withstood water after 5 to 10 years in a roof, or, in the case of Tyvek®, for more than 20 years. (For more detail on the test methods and results please see this link: www.tyvek.co.uk/rooftest.

The table shows the W1 results, W1 with the added grading system applied to all 17 Tyvek® roofing underlays and all 13 alternatives, as well as the EN20811 water column test results (green equals functional, red equals non-functional.)

As there is no clear definition in standards or codes, careful consideration as to how to assess functionality using this combined testing system is required. For example, with a W1-Grade 9 it is possible that a few drops of water could potentially move from the cold side to the insulation level. However, as diffusion takes place over the entire surface of the underlay, such minimal moisture will dry out rapidly and no reduction of functionality is likely. Also, the reduced pressure of free-running water in normal conditions should be taken into account. By applying this consideration to the W1-grading scale, it is only at Grade 5 or lower that a high risk of water infiltration becomes a concern, to the point where it may get beyond control. Martin Peifer, the independent expert, thus set the W1-grade of 6 as being the acceptable limit to ensure functionality, anything less becoming critical. For EN 20811 he set the functionality limit to < 50 cm.

Bearing this in mind, the picture is as follows:

Even without taking into account the age differences (the Tyvek® samples being significantly older than the other installed products), Tyvek® clearly emerges as the most reliable in terms of crucial watertightness, while there is significant cause for concern with alternative roofing underlays.

At 600 acres, Central Park, Avonmouth, Bristol is a warehouse and distribution development, strategically located between the M49 motorway on its ...