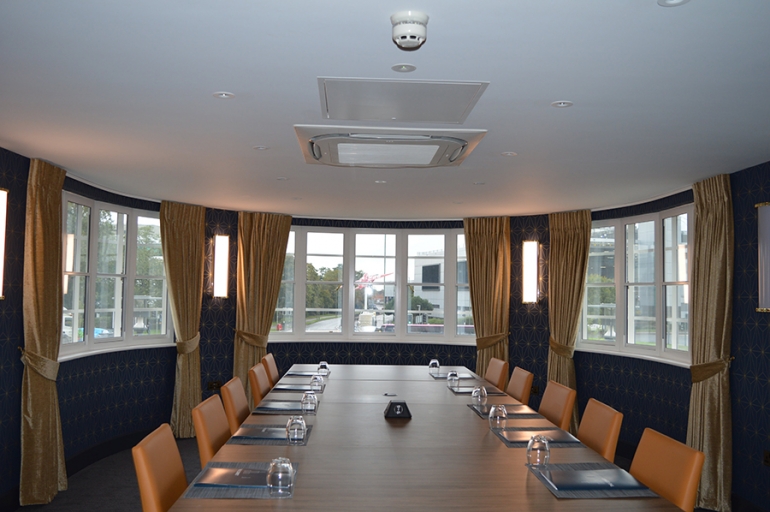 The Comet Hotel is located in Hertfordshire at the junction of the Barnet by-pass with St Albans Road, five minutes away from the Selectaglaze office and factory.

The Art Deco Grade II Listed building was designed in 1936 by E.B Musman in the shape of the iconic de Havilland Comet DH.88 aeroplane. This building style, known as ‘Streamline Moderne’, represents a late type of Art Deco architecture and graphic design that emerged in 1930s as a response to the new optimism inspired by modern technology. At the time of construction, the de Havilland airfield and aircraft factory was located just opposite the hotel.

Previously known as the Ramada Hatfield, the Comet’s multimillion pound refurbishment which began in 2017 is now complete. The works were delivered by contractor ISG Bristol and designed by architects Stride Treglown. The hotel has also opened its own restaurant, ‘Element Bar & Kitchen’. A replica of the Comet Racer, mounted on a 20ft high pylon stands tall outside the hotel.

The hotel had retained the building’s original crittal sash windows but this did not provide the required level of noise insulation to a number of the guestrooms, restaurant and function spaces for meetings and networking events.

To remedy this, St Albans based Selectaglaze installed 104 secondary glazed units, with a cavity between the existing primary windows and the secondary units to significantly improve the level of noise insulation. The secondary windows included four different systems, tailoring the units specifically to the project’s needs.

The Series 20 vertical sliding units were faceted onto the curved on plan original bay windows on the ground and first floors. This was to provide adequate thermal and noise insulation to the restaurant and meeting room. The Function room was fitted with the Series 15 three-pane horizontal slider, which can support thicker glass when higher levels of noise insulation are needed.

The majority of openings in the hotel guestrooms were treated with the Series 10 horizontal sliding unit, which is a versatile system that provides easy access to the outer window. This slimline unit has not only produced exceptionally quiet rooms thanks to noise insulation in excess of 45dB but will reduce heating costs, thus improving sustainability.

Four of the smaller windows on the first floor were also treated with Series 45 side hung casements, with no new sight lines making it very suited to the hotel’s Listed status.

The new secondary glazing to this Hatfield landmark will now help lower energy bills and afford the guests a good night sleep, along with those visiting the hotel guaranteed a pleasant and comfy experience.

Refurbishments like the Comet Hotel are often fast track projects requiring teamwork between client, contractor and specialists. Selectaglaze has thorough experience working in buildings up to Grade I Listed and offers a technical advisory service and specification advice to ensure correct interface with other trades.

Founded in 1966, Royal Warrant Holder Selectaglaze is the acknowledged specialist and market leader in the design, manufacture and installation of secondary window systems.

Sign up to receive our monthly newsletter and receive updates about our latest news and events.