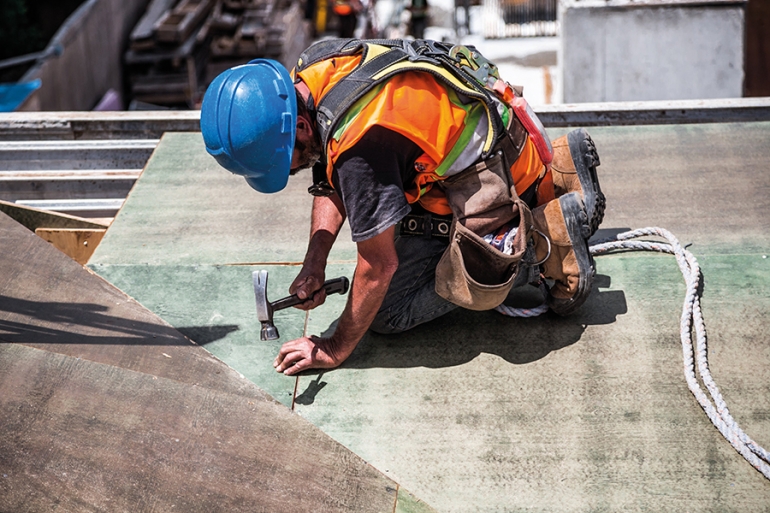 It’s no secret that the construction industry is currently facing an increasingly large skills shortage. The industry has long suffered from a lack of skilled workers, making it more difficult than ever to hit deadlines due to the shrinking talent pool.

This is a big problem for the Government, whose plans to build 300,000 new homes a year by the mid-2020s is becoming more of a pipe dream. In fact, according to the Royal Institute of Chartered Surveyors (RICS), the lack of skilled construction workers is at its highest point since 2007. In order to get back on track, the industry needs to recruit over 200,000 more workers by 2020.

Below, industry experts at Vizwear explore what problems the skills shortage in construction is causing for the Government’s home-building targets — and what companies can do to help fill key positions.

The main problem that’s contributing towards the skills shortage is that as a whole, the construction industry is still battling with an image problem.

“The industry needs to attract a fresh workforce to keep up with demands,” says Daniel Ure from online PPE retailer, Vizwear. “But for many on the outside, the thought of working in construction still conjures up images of wolf-whistling workmen on building sites. To attract a new stream of workers, the industry needs to shake this negative image and show how the industry has developed.”

Data from the 2011 census showed that in the construction industry, one in five employees were aged over 55. This means that by the early 2020s, when the industry should be hitting its home-building targets, most will have reached or be close to retirement age. An ageing workforce and an uphill recruitment battle are a combination that could have a detrimental effect on the industry.

What steps can be taken to close the gap?

The biggest barrier facing the construction industry is presenting itself as a desirable career path to potential employees. Although often seen in a bad light, there are fantastic opportunities to be had in construction, including mechanics, engineering and electronics.

There are a number of ways that construction companies can reach out to the right candidates and ensure them that a career in construction is exactly what they’re looking for. Here are a few suggestions:

A survey created by L&Q Group discovered that only one in 10 children between the ages of 16 and 18 would consider a career in construction, fearing that the industry would be ‘challenging and unexciting’. Although around 50% said that they were interested in a science, technology, engineering and maths (STEM) career, the construction industry simply wasn’t appealing enough. Interestingly, though, the students who said they would consider a construction career said that their reasoning was due to the excitement of the role.

Working closely with schools and colleges to promote the industry is a great way to show young people that there are a number of avenues their career path can take in construction. By setting up a formal work experience programme, you can attract future workers with real, hands-on experience to give students the chance to experience the industry for themselves.

By offering proper training programmes, construction companies have the opportunity to help close the skills gap with new talent. It’s not just labour-intensive roles that are suffering from the skills shortage – there is also a demand for tech and digital skills.

But rather than looking externally for these roles, use it as an opportunity to upskill your current staff. Nurturing talent within your business is great for morale; plus, you’ll help to develop your team’s careers, skill sets and better utilise ambitious and forward-thinking workers.

The training involved with upskilling current workers can be as simple as one-on-one mentoring, or you can make use of the wide range of online and practical courses available for skill development.

There are also Government-funded schemes available to help train future construction workers. For instance, we are currently in the middle of an 18-month fund set up by the Government, launched with a budget of £22m. This scheme launched 20 on-site hubs, of which people looking to join the industry, as well as people switching careers, can apply their knowledge in a real-world environment.

3. Look for skilled workers in the right places

Ensuring that next-generation workers are knowledgeable about the industry is vital, but other skilled groups are waiting to be snapped up by the industry.

For example, over 14,000 leave the military every year, meaning the construction industry has a pool of highly trained individuals with transferable skills at their disposal. There are a number of companies that have already reaped the benefits of military leavers, and even provide specialist training and learning credits to get them fully trained as soon as possible.

Part of the problem is that construction is a historically male-dominated industry. Between 2007 and 2016, reports found that the number of women workers in construction only rose by 0.7%, resulting in an incredibly low 12.8% total. But it’s not just workers in the industry, nearly half of construction workers claimed that they have never had a female manager.

Whatever the role, women in construction are being overlooked. As women make up half of the population, it seems crazy that the industry is ignoring so much potential talent that it sorely needs to help fill the skills gap.

Educating female students is a crucial step that companies need to take, as only 22% currently work with schools to help break the stigma of construction. But it’s not just about attracting more women to the industry – companies need to make sure they’re not ignoring their current talent due to their gender. For example, the international infrastructure group Balfour Beatty has taken strides to address gender inequality by introducing an initiative to support women through career breaks for childcare.

The Government has already been warned by the Housing, Communities and Local Government Committee that an over-reliance on traditional building methods will see the UK fall short of its home-building targets.

To keep the industry on target, construction companies need to look outside the norm and embrace more modern techniques. From off-site construction, manufacturing and assembly to modular constructions, there are a number of avenues companies can take to improve efficiency while maintaining quality.

“In order to make the most of new industry methods, it’s vital that new talent is found to close the skills gap. Construction is still trying to shake off its past image, but by pooling its resources into educating and training future generations and current talent, the industry can ensure it’s recruiting the right workers to hit its targets.”