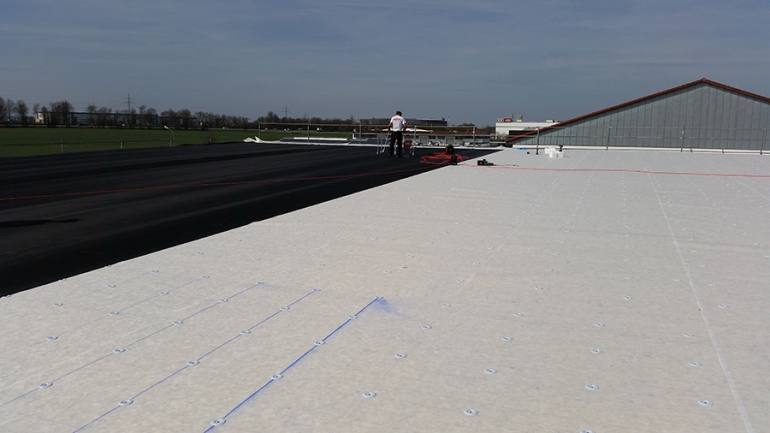 One of the biggest challenges facing architects is the implementation of the design as envisaged. Many times there is a pressure which may be due to installation limitations caused by weather, resulting in a compromise on the design or the material for the roofing installation.

eather is a big influence on the installation of the roofing system. It is stating the obvious that the UK and the global weather system is unpredictable and constantly changing.

Every weather system comes with its own challenges, however, there is a new dimension of mechanically fixing EPDM waterproofing membranes to make flat roofs watertight. This feature explores the innovative induction fixing method to mechanically fix EPDM membranes. Using this method the roofing membrane is not punctured so there are fewer opportunities for the water to penetrate.

In the past, membranes had to be bonded or secured in place with ballast. With the electromagnetic RhinoBond induction method, this is no longer required.

RhinoBond is an innovative and comprehensive system, whereby the EPDM roofing membranes are fixed to the induction compatible fastening plates and the roof insulation is fastened to the roof structure or the substrate. Special pressure distribution plates are used for this and fixing is achieved by means of induction.

RhinoBond is a patented electromagnetic induction welding technique known as Sinch. Once the pressure distribution plates (PDP) have been installed on top of the roof insulation, the EPDM membrane is spread out over the roof. The special coating on the PDPs is heated using the RhinoBond welding device, which becomes liquid. It only takes five seconds to heat. The welding device is activated directly above the PDP.

By placing a weighted magnetic RhinoBond heat sink on the EPDM and the PDP, a strong and durable joint is achieved within 45 seconds. In this manner, the underside of the EPDM roofing membrane is attached to the PDP.

The RhinoBond system uses up to 30% less mechanical fixings in comparison with traditional systems (subject to the wind load zone and the substrate). Because the mechanical fixing is in the main roof membrane, the wind load is better absorbed and evenly distributed over the EPDM sheet. As a result, the load per fixing point is less and the system can handle more wind with less fixing material.

The fixing system reaches its full potential when combined with an EPDM membrane, such as Hertalan Easy Cover membranes. This can be pre-fabricated into large sheets which make it possible to cover a roof in one sheet or if the roof area is large, then fewer joints and sheets. This reduces the amount of seaming required on the site and the unique benefits of both products ultimately increase the productivity of the roofing contractor.

Even distribution of wind load

In contrast to traditional methods involving seam fixing, field fixing with the induction process distributes the wind load evenly over the EPDM membranes. This prevents any asymmetrical force impact on the fastening plates and seams. The position of the fastening plate is defined based on the wind load calculations for the property and distributed in the roof system. As a result, despite mechanical fixing, larger membranes can be used and a clear reduction achieved in the seam proportions and seam overlap compared to conventional systems fixed in place by mechanical means.

Since the fixing points are distributed like a grid across the entire roof and not just placed on the membrane joints, the wind forces are supported more evenly. As a result, the point load per fixing element is less and the system can handle higher wind forces with fewer fixing requirements.