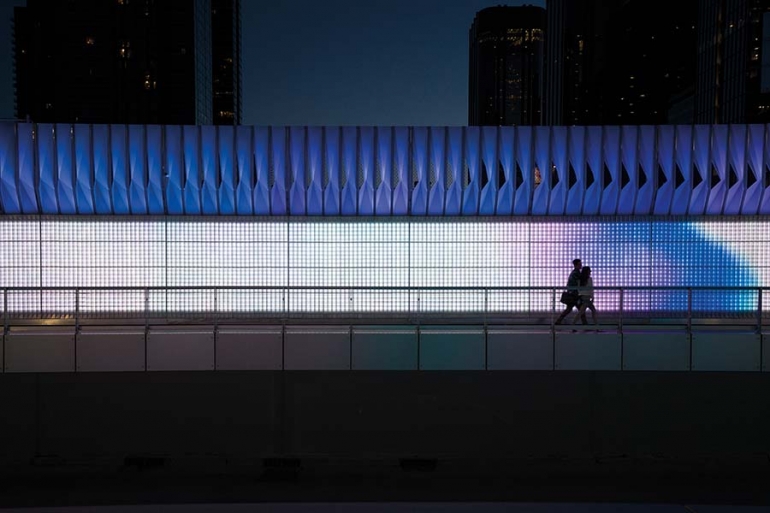 For the longest time, Calgary, Canada’s third-largest city, resisted the very notion of design. Then, as Santiago Calatrava was called in to build the Peace Bridge, things started to change. And firms such as the marc boutin architectural collaborative (MBAC) are now able to propose – and build – projects that would not have been considered 15 years ago. 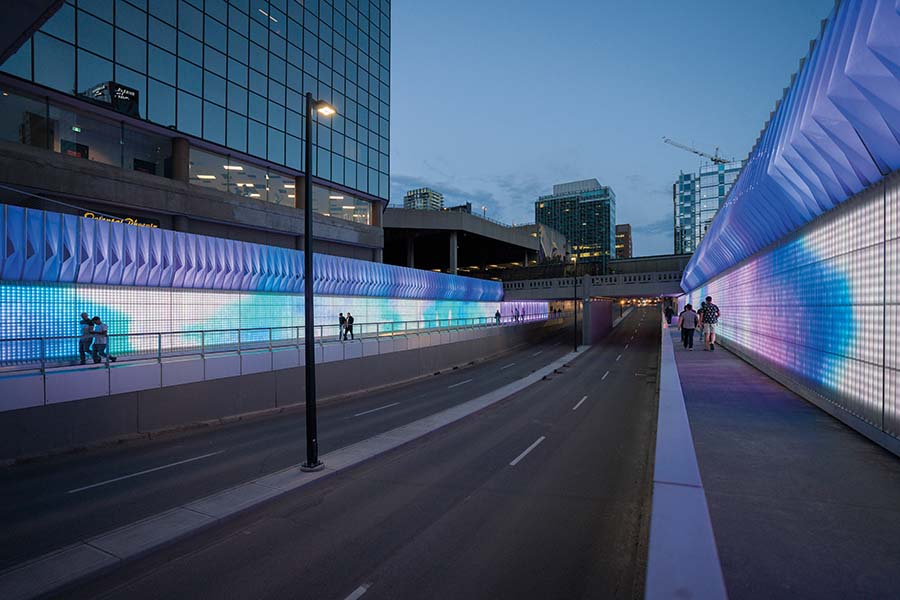 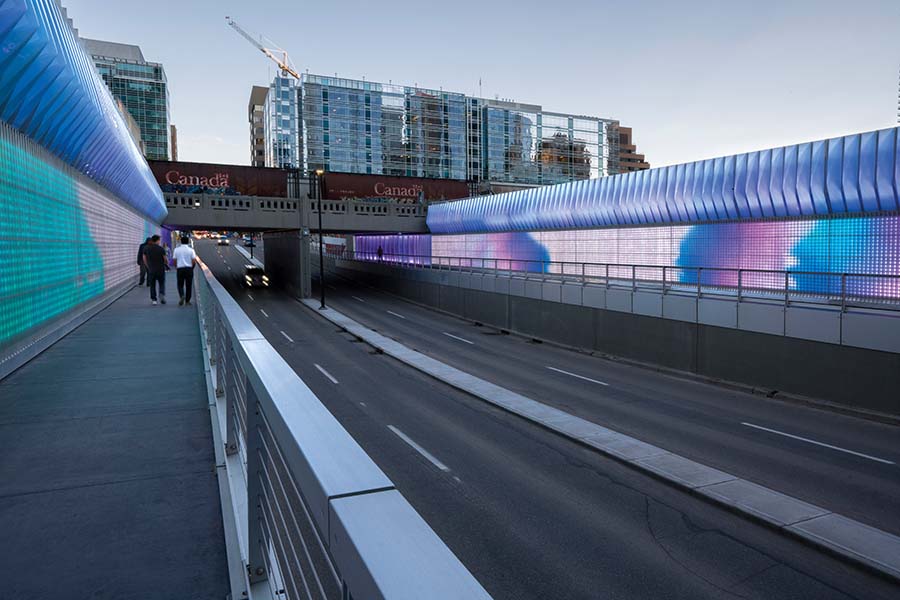 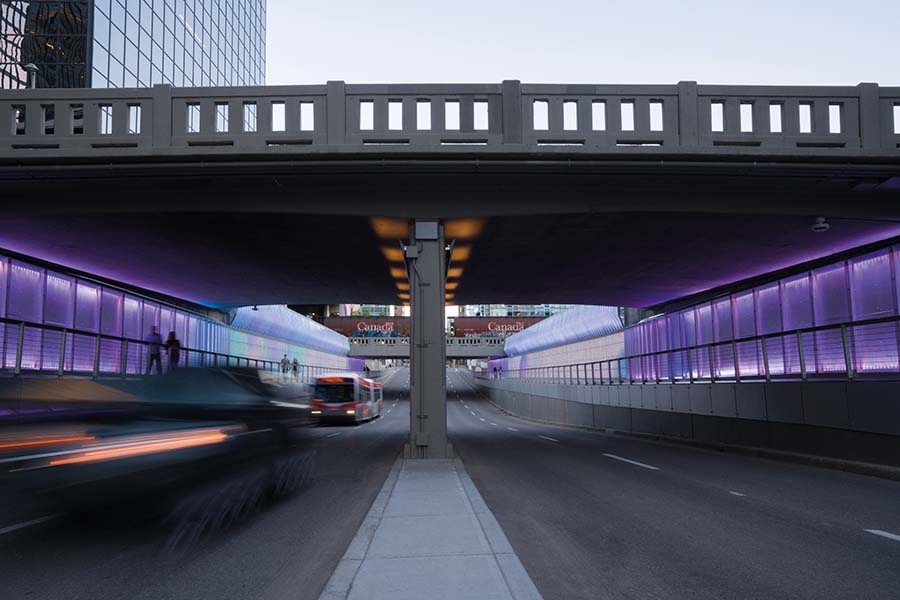 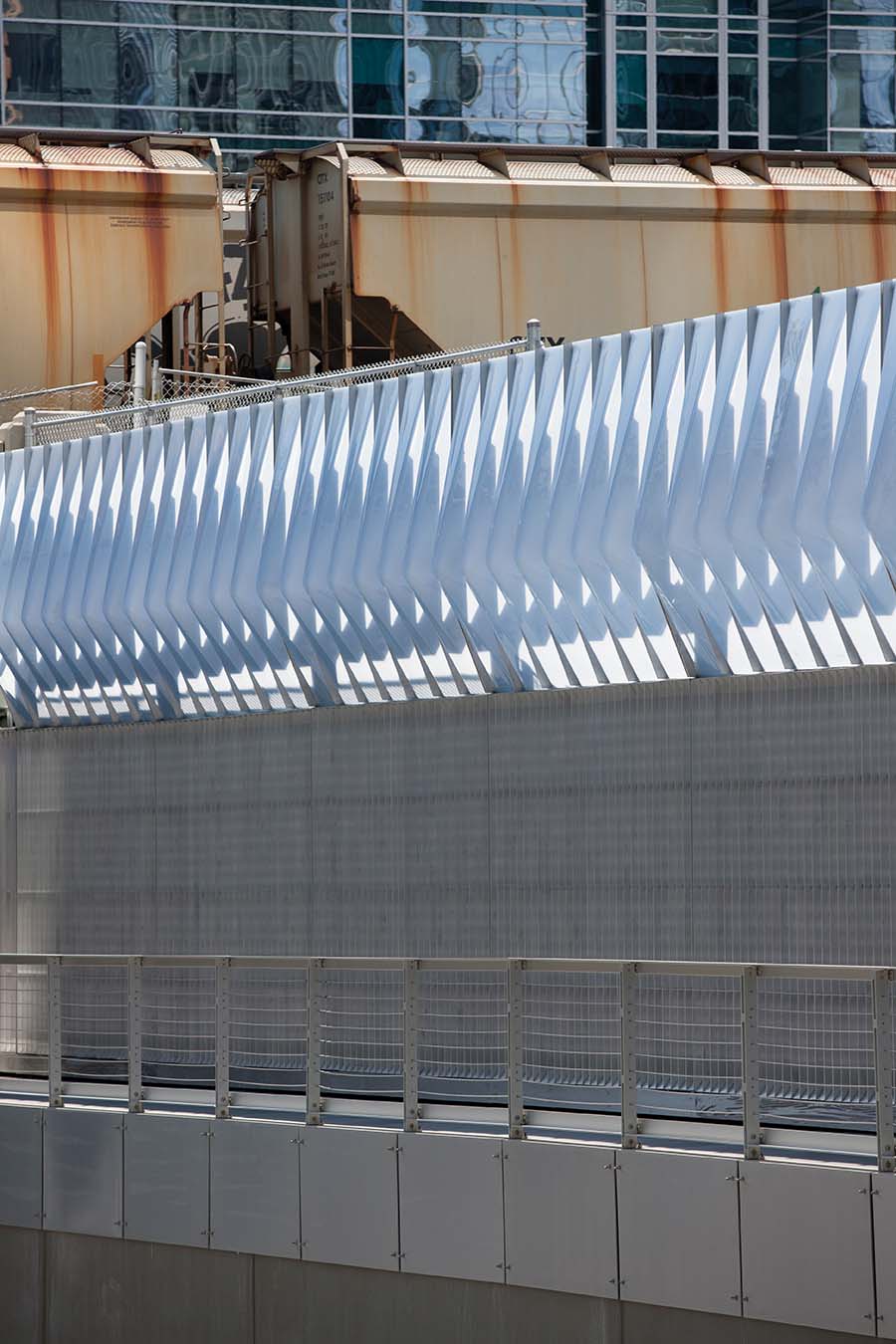 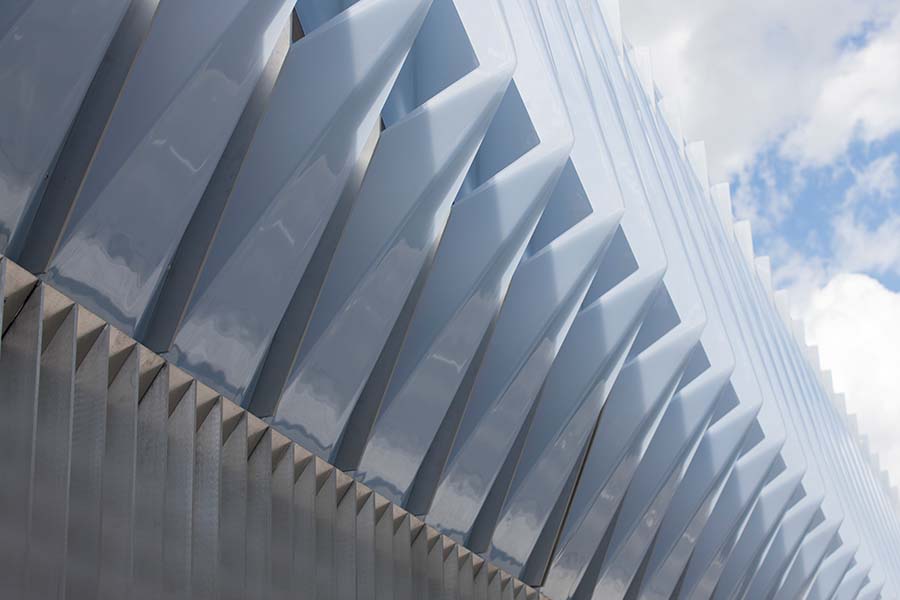 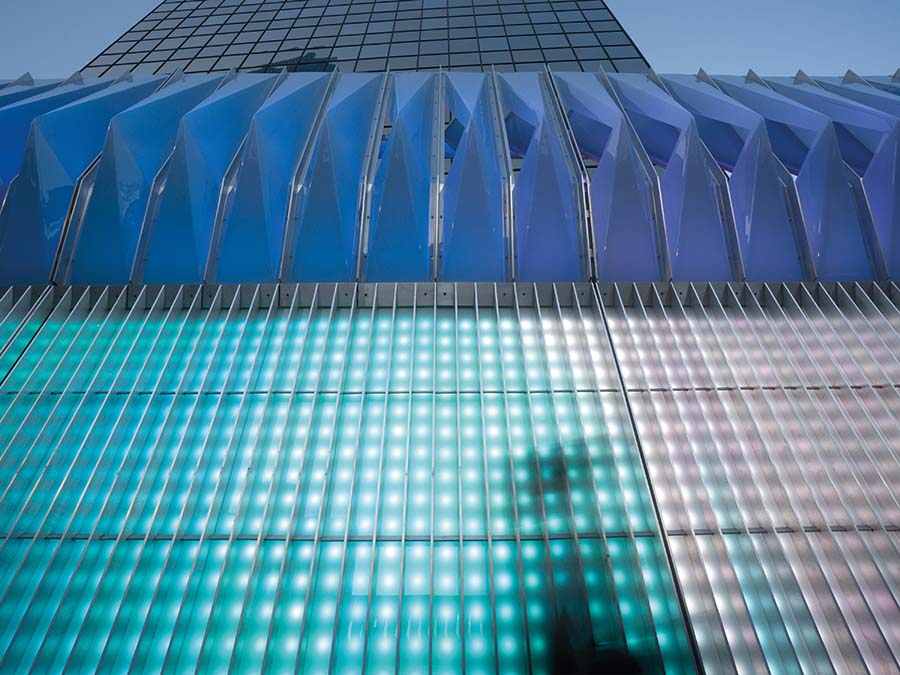 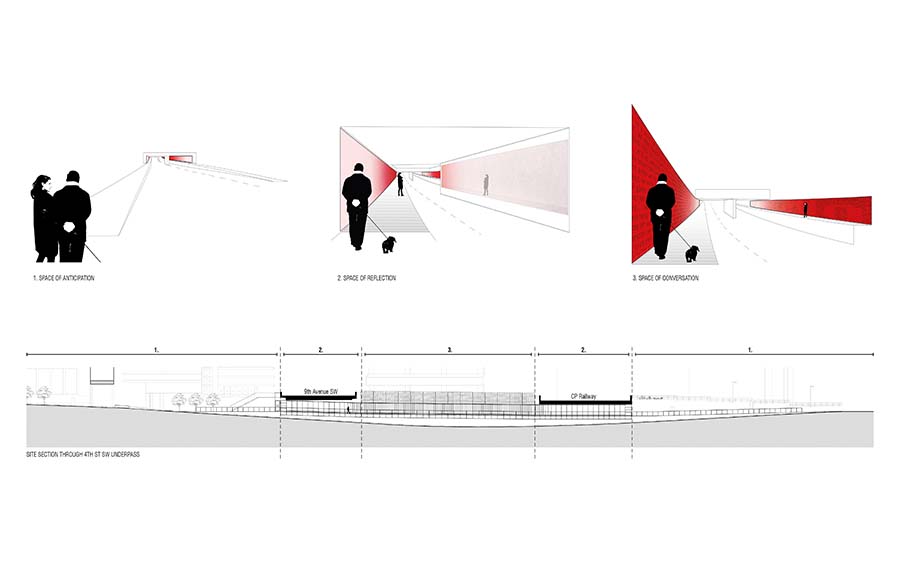 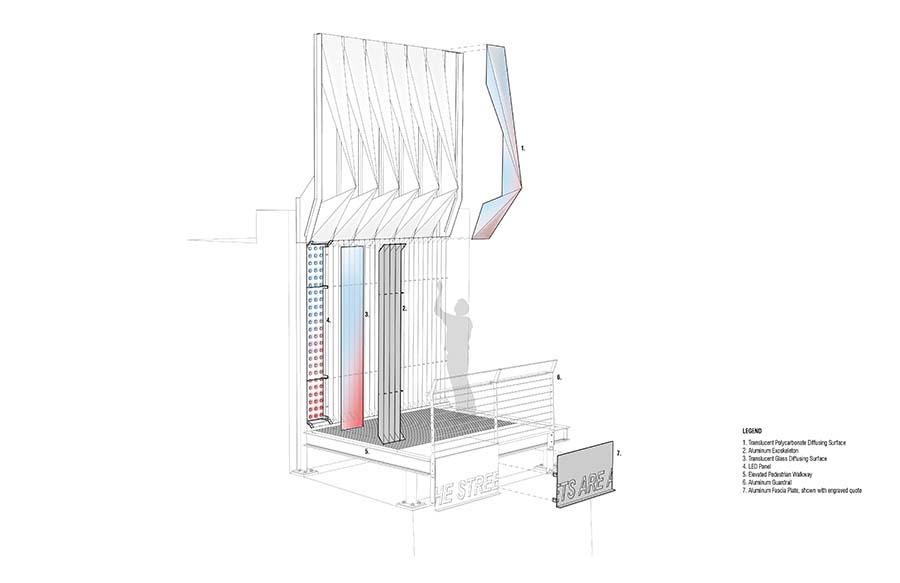 In 2015, Marc Boutin and his team were entrusted with an unusual task, that of revitalising an important urban passageway, the 4th Street SW Underpass. Internationally-known Artist Krzysztof Wodiczko joined the team as well as Boston-based studio INVIVIA. Four years later, long-time design champion and City Councilor, Druh Farrell, described the transformed infrastructure as “a place of delight and wonder”.

MBAC has been at the forefront of Calgary’s recent transformation, with inspiring urban projects such as Memorial Drive, Poppy Plaza and C-Square. Today, with its towers designed by Foster and BIG, and with Snøhetta’s Central Library, Calgary may not yet be the country’s top design destination, but it is definitely worth a visit.

The underpass, a familiar feature of Western Canadian cities, is a modest yet essential type of urban infrastructure. Calgary’s core, very much shaped by the advent of the railway in the 1880s, is still cut in half by the major rail corridor, which separates the city’s downtown from the adjacent Beltline neighbourhood. From the south, access to the centre, for pedestrians, cyclists and car drivers, is only possible through the sunken ‘gateways’ of the underpasses.

Although these underpasses were initially conceived as a mechanism for safe movement, they have ironically come to embody some of Calgary’s most uncomfortable public spaces. The two-block stretch of the 4th Street SW Underpass was no exception.

In 2010, when Calgary released its set of urban design guidelines for downtown underpasses, it identified this particular underpass as a priority project.

Limited accessibility, poor lighting conditions, particularly at night and during the winter, pedestrian safety and overall deterioration called for a radical solution, one that would provide a safe, comfortable, and engaging public space.

MBAC’s proposal for the 4th Street SW Underpass was founded on the notion of reclaiming a ‘space of removal’ and turning it into a ‘space for conversation.’ The design responded to a narrative they developed for this two-block long underpass, which goes under the Canadian Pacific Railway (CPR) rail corridor and 9th Avenue.

As pedestrians walk down towards the first segment of the underpass, they go through the ‘Space of Anticipation’, followed by the ‘Space of Reflection’. The middle section, open to the sky above, becomes the ‘Space of Conversation’. The introduction of animated light and colour effects, responding to the flow of people going through the double underpass, was meant to create an evocative and timeless experience.

The effects are produced by thousands of LED lights located along the 87m walls on either side of the underpass. A sophisticated custom detection technology software, which generates an abstract representation of passersby’s movements, was developed by Boston-based INVIVIA consultants. Cameras sense pedestrians as they enter the underpass and project their shadows diagonally across, on the facing wall. According to Artist Krzysztof Wodiczko: “This interactive light installation creates an impression of seeing ourselves the way we are seen by others when observed from across the underpass.”

Materials were selected for their ability to reflect, diffuse and ‘catch’ light. The envelope designed to house the interactive lighting installation includes a reflective aluminium ‘exoskeleton’, on the public side, an 8mm layer of tempered, laminated safety glass with a translucent interlayer for light diffusion, a thermoformed, translucent polycarbonate panel and a supporting subframe of galvanised steel, hung from the existing concrete infrastructure.

Particular attention was paid to ensure that this public art installation would perform not only at night but also during the daytime. The lighting system’s components are located within the new envelope, behind the protective surfaces. The wall itself is designed as a series of panels so that each individual LED fixture can be accessed, serviced or replaced.

Citizens were given various opportunities to participate in the creative process, identifying issues within the existing site, finding collective solutions and influencing the project as it progressed. Models and mock-ups served as key tools for coordinating with consultants and suppliers, as well as for communicating the project’s feasibility to the City of Calgary’s internal stakeholders.