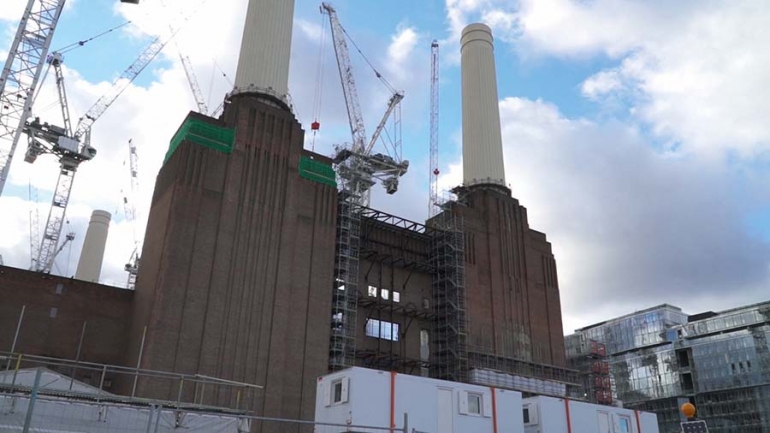 BriggsAmasco, a leading national commercial roofing company, is currently undertaking a complex multiple-roof installation as part of a spectacular redevelopment designed to transform one of London’s most recognisable landmarks into a highly-desirable mixed-use development.

Battersea Power Station, with its towering white chimneys, has been an indomitable fixture on London’s skyline since its construction was fully completed in 1955. Located beside the Thames on the capital’s South Bank, the site has been largely derelict since the power station was decommissioned in the 1980s. A bold and imaginative plan was conceived in 2012 to convert the 39-acre site into a thriving mini-city, replete with retail stores, restaurants and bars, a six-acre park, a community theatre and residential apartments. BriggsAmasco, with its proven track record for delivering a range of waterproof applications for complex, high-profile projects, was selected to install multiple roof systems for phases one and two of the eight-phase Battersea Power Station project.

The initial phase involved the redevelopment of the site’s Circus West Village. Comprising 850 residential apartments – situated within a 12-storey residential block – retail facilities, theatre space, business studios and two levels of parking, the area is now home to more than 1000 residents. BriggsAmasco was selected by contractor, Carillion, to supply six green roofs and two lower-level roofs consisting of limestone paving for the residential blocks. This proved a logistically complex operation, due to the removal of cranes and external hoists from the site. It meant BriggsAmasco operatives had to transport project finishes including insulation, granite paving and green roofing materials to the highest point of the multi-storey buildings via a passenger lift system.

For the green roof installation, BriggsAmasco used a Hydrotech Monolithic hot-melt membrane, which was fully-bonded to the substrate. The system provides excellent roof protection and allows immediate access to waterproofed areas. Its membrane is designed to last a building’s lifetime, offering seamless, waterproof protection for podiums and highly-detailed water feature projects. Rigid extruded polystyrene insulation (XPS) provided the membrane’s insulation layer. Due to its compressive strength, XPS is ideal for specialist applications such as car park decks and inverted roofing.

A plug plant system constituted the roof’s sustainable, green finish. None of the green roofs, which are located between the tracks of an external Building Maintenance Unit (BMU) on every level of the complex, will be accessible to the building’s future occupiers. A glass balustrade lines the perimeter of each building level to help maintain the roofs’ inaccessibility and aesthetic appeal. Despite the logistical challenges, BriggsAmasco completed the green roof installation in April 2017, which was in accordance with the agreed timeframe.

Phase two of the Battersea Power Station project involves the regeneration of the Grade II Listed station itself. Its 21st-century repurposing will include approximately 100 new retail, food and drink outlets, a 2000-capacity events venue, 500,000ft2 of new office space, and 253 new residential homes. As well as supplying multiple waterproofing systems such as green roofs, hot-melt and built-up felt to buildings throughout the revamped power station, BriggsAmasco was requested by contractor Mace Group to re-waterproof the building’s famous white chimneys using mastic asphalt. In accordance with plans drawn up by architect firm WilkinsonEyre in consultation with Heritage England, the original chimneys were taken down and rebuilt in an identical fashion. To provide the new structures with long-term waterproof protection, BriggsAmasco applied mastic asphalt to the chimneys’ base at a thickness of 20mm, totalling 500m2 over the four chimneys.

Speaking of the chimneys’ waterproof application, Dave Maginnis, Managing Director at BriggsAmasco, said: “This element of the project was a challenge in terms of logistics, as the base of the chimneys is 18 floors above ground. It meant our installers needed to apply a high level of craftsmanship, traditional design knowledge and an understanding of the possibilities of using polymer modified mastic asphalt in order to achieve the required complex interfaces so that they last a further 60 years.”

Phase two of the Battersea Power Station project, which also includes the building of an energy centre and a six-acre public riverside park, is due for completion in late 2020. It will be open to the public in 2021, completing this historic building’s transformation from a relic to Britain’s industrial past, to a cornerstone of one of the most ambitious city regenerations undertaken in the UK in modern times. The project’s long-term success will be due in part to BriggsAmasco’s waterproofing expertise, which will provide long-term protection for the site’s homes and businesses and the power station’s mighty white chimneys.