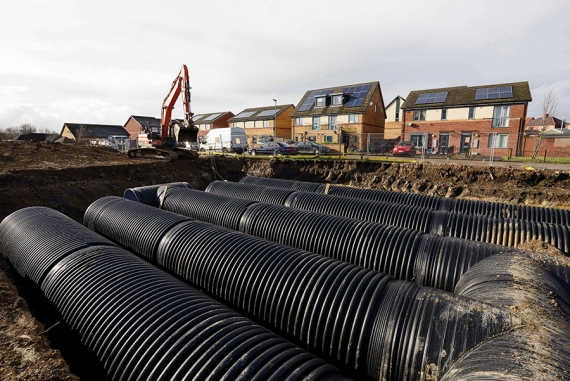 Working within restricted space on a new, ambitious social housing development in Barnsley, a fully adoptable stormwater attenuation tank manufactured from Polypipe’s Ridgistorm-XL large diameter pipe has been installed as a key element of a project-wide sustainable water management scheme.

The £5.7m Catherine’s Walk development will see the creation of 54 affordable homes for Leeds & Yorkshire Housing Association (LYHA) in the centre of an existing housing estate.

The project is the largest LYHA has undertaken for some time and is the vision of Leeds-based architect firm, Acanthus WSM. Given the pressure on housing in the area, the major challenge of the project was to realise a scheme that delivered the greatest development potential on a tight footprint while enhancing the living environment for both existing and new residents. Doing this successfully would mean preserving critical green infrastructure, such as established trees and hedgerows. For consulting engineer, WSP, integrating new surface water drainage and sewer systems would have to be achieved without overloading existing capacity.

To eliminate any risk of surface water flooding, WSP required a 350m3, fully adoptable attenuation tank to be created beneath an existing public open space within the boundary of the development. The initial proposal was based on a single manifold, five-leg 1800mm large diameter pipe solution laid out to a rectangular plan. This configuration provided the access required for adoptability but, due to the locations of inlet and outlet, impaired the flow profile within the tank and hence its self-cleaning performance.

Responsible for delivering the overall project, main contractor, ENGIE, was already working with Polypipe’s building products division designing the on-plot drainage and sewer network. Realising the benefit of working with a single supplier across the entire water management scheme, the ENGIE team and Carl Watson from Watson Groundworks asked Polypipe Civils to undertake a value-engineering review of the initial tank proposal.

“The plan area for the tank had changed from the original brief as a number of established trees had to be accommodated. This meant the tank layout needed to be ‘staggered’ to achieve the required capacity,” says Kostas Tettas, Senior Technical Engineer at Polypipe Civils. “The fabrication versatility of Ridgistorm-XL allowed us to create an optimised, multi-manifold design which not only achieved the attenuation volume but also improved the hydraulic flow performance, reducing ongoing maintenance requirements. Critically, all of the proposed modifications and enhancements could be achieved without compromising the overall budget.”

All of the 1800mm Ridgistorm-XL tank components were manufactured and tested off-site at Polypipe Civils’ Loughborough facility. Delivered to site as pre-assembled components, the installation was completed quickly with minimal disruption to ongoing works and residents. Overseeing the tank installation, Carl Watson, owner of Watson Groundworks, commented: “With space and delivery windows extremely limited on the project, achieving a fast-fit install was essential. With much of the work being carried out off-site, we are able to minimise man-hours on the assembly, reducing cost and improving health and safety.”