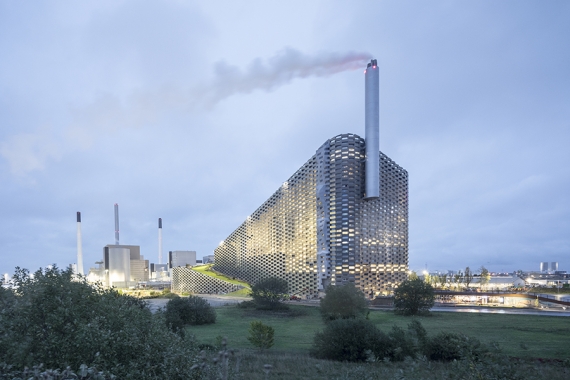 Designed by Bjarke Ingels Group (BIG), SLA, AKT, Lüchinger+Meyer, MOE and Rambøll, CopenHill opens as a new breed of waste-to-energy plant topped with a ski slope, hiking trail and climbing wall, embodying the notion of hedonistic sustainability while aligning with Copenhagen’s goal of becoming the world’s first carbon-neutral city by 2025.

“We are very proud to have built the most energy-efficient waste-to-energy plant in the world. At the same time, the plant delivers the best environmental performance with hardly any environmental emissions, enabling us to have neighbours only 200m away and to be located less than 2km from the Queen’s residence. Last but not least, we have succeeded in building the safest waste-to-energy plant so local citizens and guests from all over the world can ski on the roof,” explained Jacob Simonsen, Managing Director at ARC.

CopenHill is conceived as a public infrastructure with intended social side-effects from day one. Replacing the adjacent 50-year-old waste-to-energy plant with Amager Resource Centre (ARC), CopenHill’s new waste-to-energy facilities integrate the latest technologies in waste treatment and energy production. Due to its location on the industrial waterfront of Amager, where raw industrial facilities have become the site for extreme sports from wakeboarding to go-kart racing, the new power plant adds skiing, hiking and rock climbing to thrill-seekers’ wish lists.

“CopenHill is a blatant architectural expression of something that would otherwise have remained invisible: that it is the cleanest waste-to-energy power plant in the world. As a power plant, CopenHill is so clean that we have been able to turn its building mass into the bedrock of the social life of the city – its facade is climbable, its roof is hikeable, and its slopes are skiable. A crystal-clear example of hedonistic sustainability – that a sustainable city is not only better for the environment – it is also more enjoyable for the lives of its citizens,” says Bjarke Ingels, Founder & Creative Director at BIG.

The internal volumes of the power plant are determined by the precise positioning and organisation of its machinery in height order, creating an efficient, sloping rooftop fit for a 9000m2 ski terrain. At the top, experts can glide down the artificial ski slope with the same length as an Olympic half-pipe, test the freestyle park or try the timed slalom course, while beginners and kids practice on the lower slopes. Skiers ascend the park from the platter lift, carpet lifts or glass elevator for a glimpse inside the 24-hour operations of a waste-to-plant.

“We wanted to do more than just create a beautiful skin around the factory. We wanted to add functionality. Instead of considering the Amager Resource Center (ARC) as an isolated object, we mobilise the architecture and intensify the relationship between the building and the city – expanding the existing activities in the area by turning the roof of the new ARC into a ski slope for the citizens of Copenhagen. By proposing a new breed of waste-to-energy plant, one that is economically, environmentally and socially sustainable, the facility becomes part of the city and redefines the relationship between production and recreation, between energy infrastructure and social infrastructure, between factory and city,” commented David Zahle, Partner at BIG.

Recreation buffs and visitors reaching the summit of CopenHill will feel the novelty of a mountain in an otherwise-flat country. Non-skiers can enjoy the rooftop bar, cross-fit area, climbing wall or highest viewing plateau in the city before descending the 490m tree-lined hiking and running trail within a lush, mountainous terrain designed by Danish landscape architect firm SLA. Meanwhile, the 10,000m2 green roof addresses the challenging micro-climate of an 85m-high park, rewilding a biodiverse landscape while absorbing heat, removing air particulates and minimising stormwater runoff.

“CopenHill’s nature roof park and hiking trail invites locals and visitors to traverse a mountainous landscape of plants, rockscapes, 7000 bushes and 300 pine and willow trees atop the world’s cleanest waste-to-energy plant. It also acts as a generous ‘green gift’ that will radically green-up the adjacent industrial area. CopenHill becomes the home for birds, bees, butterflies and flowers, creating a vibrant green pocket and forming a completely new urban ecosystem for the city of Copenhagen,” said Rasmus Astrup, Partner & Design Principal at SLA.

Beneath the slopes, whirring furnaces, steam and turbines convert 440,000 tons of waste annually into enough clean energy to deliver electricity and district heating for 150,000 homes. The necessities of the power plant to complete this task, from ventilation shafts to air-intakes, help create the varied topography of a mountain; a man-made landscape created in the encounter between the needs from below and the desires from above. 10 floors of administrative space are occupied by the ARC team, including a 600m2 education centre for academic tours, workshops and sustainability conferences.

Rather than consider ARC as an isolated architectural object, the building envelope is conceived as an opportunity for the local context while forming a destination and a reflection on the progressive vision of the company. CopenHill’s continuous facade comprises 1.2m-tall and 3.3m-wide aluminium bricks stacked like gigantic bricks overlapping with each other. In between, glazed windows allow daylight to reach deep inside the facility, while larger openings on the southwest facade illuminate workstations on the administrative floors. On the longest vertical facade, an 85m climbing wall is installed to be the tallest artificial climbing wall in the world for new world records to be broken with views inside the factory.

“To me, CopenHill is a perfect example of the world-changing power of architecture. That we have the power to give form to the future that we want to live in. My son turns one next month – he won’t ever remember that there was a time when you couldn’t ski on the roof of the power plant – or climb its facades. He will take that for granted – and so will his entire generation. Clean energy and skiable power plants are going be the baseline of their imagination – the platform from which they will leap and propose new and wild ideas for their future. Standing at the peak of this human-made mountain that we have spent the last decade creating – makes me curious and excited to see what ideas this summit may spark in the minds of our future generations,” concluded Bjarke Ingels.

At the bottom of the ski slope, a 600m2 apres-ski bar welcomes locals and visitors to wind down once the boots are off. Formerly a piece of infrastructure in an industrial zone, CopenHill becomes the new destination for families, friends and celebration, one that is economically, environmentally and socially profitable.