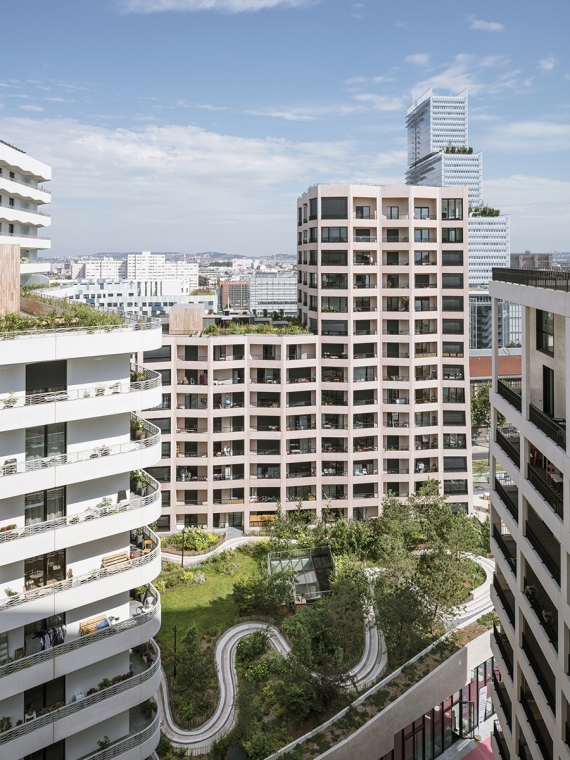 Located in the new Clichy-Batignolles neighbourhood, the project’s position, overlooking larger Grand Paris, takes advantage of its siting by multiplying corner angles for near and far views and distributing density to the three ‘bows’ of the triangular site before rising to the maximum authorised height of 50m.

Three residential buildings, offering exceptional views of the great Parisian landscape, anchor three corners of a mixed-use block. At the heart of the project is a cultural centre for the new ZAC Clichy-Batignolles district in Paris’ 17th arrondissement – a seven-theatre cinema and a community centre. These public volumes, anchored to the ground, give way to the public realm and are crowned with hanging gardens. Three residential blocks emerge from this base, climbing up to 50m. This simple distribution of masses effectively resolves the inscription of a complex programme on a high-density site. Thickened facades permit a band of generous loggias around the residential blocks. Architectural precast concrete on the buildings’ facades situate the project within the material tradition of Parisian stone and concrete and gives each of the three buildings a singular expression from the ground to the sky – the twisted form with its torqued effect (sand-coloured), the chiseled bar with continuous balconies (in white) and the pleated tower with its progressive fold (in white).

The new Clichy-Batignolles neighbourhood occupies a unique place in the Parisian urban landscape; it both belongs to the large open space of the city’s green belt and links the neighbourhoods of the 17th arrondissement to the town of Clichy. The cultural block is emblematic of the primary axes that first shaped this territory – Rue Mstislav Rostropovitch, Boulevard Berthier, the railway tracks and the park. Despite the difficulties of being trapped between infrastructure, the site has extraordinary potential to centralise uses and strengthen social connections.

The parcel also benefits from its visibility at great distances, given the overall low density of the green belt and elevated position generated by the railway topography. These corner conditions, combined with the potential for both close and distant visibility, motivated the decision to concentrate the density at the corners of the site, up to a maximum height of 50m. The site’s topography allowed a large part of the public programme and all of the parking to be located in a partially underground podium, from which the three collective housing forms ascend. This distribution of volumes makes a clear distinction between the cultural spaces, anchored to the ground, and residential programmes that expand upward, opening up to the greater landscape.

The cultural centre of Batignolles occupies a strategic position at the edge of the 17th arrondissement and Martin Luther King Park, facing Boulevard Berthier and visible from the Porte de Clichy. It fronts the Paris Opera’s Ateliers Berthier, which today hosts the Théâtre de l’Odéon. The block completes this cultural offering with ‘Les 7 Batignolles’, a seven-theatre cinema and community centre, which includes a concert space and dance studios. These public programmes make the block a natural destination for the whole neighbourhood.

The cultural aim of the project confers a special status at the corner of two streets, giving the public space a recognisable identity and creating a destination. In order to open the block to the public, both the community centre and cinema feature transparent facades looking onto the park and a footpath at the centre of the block. This path encourages relaxing interactions between the public and residents throughout the day. It also gives access to a flexible space at the front of the cinema, a fully glazed multi-use cultural space facing the park. From this space, the public can descend into the theatres or cross through the lobby, connecting to Boulevard Berthier. An interior street that resolves the lower-level change and connects the neighbourhood through the centre of the site. The community centre completes the gesture with a large lower-level auditorium and a dance studio that overlooks the street. An educational garden on the roof of the community centre supports its programmes, and the cinema rooftop operates as a shared garden for residents.

The positioning of the three residential blocks at the corners of the triangular site permits views and light at every floor. The building volumes are carved to privilege diagonal views, daylight and to maximise the number of corner units. The area of each unit is extended by an average of 14m2 of exterior space per unit with a generous balcony occupying the thickened facade (instead of the typical 9m2). These spaces, effectively an additional room, provide uninterrupted views of the landscape while maintaining privacy with opaque balustrades.

Here, outdoor living is possible; with a minimum depth of 1.6m, these spaces can comfortably accommodate a table and four chairs.

These external extensions of the living spaces resulted in several unique conditions, such as the double-height loggias at the 15th floor, internal patios on the 10th, and private terraces on the 11th. Collective terraces are also accessible to residents at the second and 11th floors. At the second floor, for example, a large garden hangs above the cinema featuring a path meandering between the trees as if it were a vertical extension of the park.

Designing 50m residential buildings (15 floors) meant that the expression of height was specifically considered in order to avoid the traditionally repetitive and static effect of stacked floors. Thus, all three buildings use the facade to create an overall sense of movement and a dynamic effect from bottom to top; from the ground to the sky.

The sand-coloured, or ‘twisted’, building is conceived in an upward movement wrapping the building. This effect is produced by a regular shift in the structural span from one floor to the next. Thus, the form seems to curl upon itself, in the manner of an atmospheric movement. The pink, or ‘pleated’, building is characterised by the gradual transition from a flat facade in the lower floors to a pleated facade on the upper floors. This articulation gives the form a dynamic profile that changes depending on the viewing angle. The white, or ‘chiselled’ building is best perceived from pedestrian height. The balcony soffits are carved into faceted profiles that gradually change throughout each floor. Each building also treats the last floor differently to establish a ‘crown’.

The desire for unity resulted in the use of prefabricated concrete on the facade of each building. This material, having great solidity and exceptional durability, allowed for a greater variety of finishes and colours. Beyond the technical approach that justified this choice, the material also places the project within the continuity of Parisian masonry.

Factory fabrication has a low environmental impact because it reduces waste and simplifies on-site logistics (traffic and sound pollution). It also allows for a greater precision over the colours of the building elements, an especially important aspect for projects of this size that have a long lifespan and a range of climatic conditions across the site. The buildings’ colours are inherent to their materiality, especially here, where the concrete is naturally coloured by the sand and aggregates. No artificial colourants or additives tint the precast load-bearing facade system.

This micro-landscape invites us to explore, despite a limited site, the impression of a larger landscape (miniaturisation), to travel in space and time (heterotopy), and to feel the vibration of a present multiplied in time. An atmospheric nature is created overlooking Martin Luther King Park, an outlook onto the city and its layers of urban horizons. The creation of this nature requires great precision. The emotional construction of this landscape is a collage of images, memories and sensations. This is translated via the forming of a wooded hill, a winding pathway, as well as views and textures that make it possible for this living nature to climb hills or tumble down its slopes.

These gardens become supports for the history and memories of residents by staging a theatre of nature and time: plants growing more luxurious and sensual with variations throughout seasons and years.

The sophisticated composition of the garden creates a rich variety of uses both individual and collective. For example, an active use like crossing the garden or a more contemplative one as when viewed from a dwelling. This physical contact with nature allows you to either garden privately on your own balcony or collectively in the communal garden, to either admire nature or engage with it, and to meet neighbours. These pockets of gardens on the rooftops are a form of nature that enriches the city which makes the city seem more hospitable.