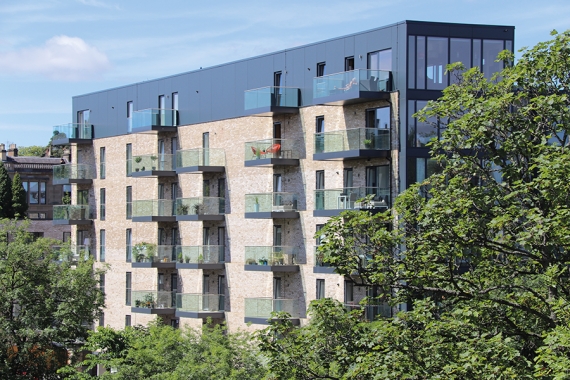 Latest Government regulations on fire safety in residential buildings taller than 18m ban the use of combustible materials in cladding and balconies. The new ban – confirmed in Parliament on 29 November 2018 by the Secretary of State for Housing, Communities and Local Government, James Brokenshire – flows from Dame Judith Hackett’s review of the Grenfell tragedy. The ban is not retrospective but it does apply to all buildings where work starts after 21 February 2019.

Designing to minimise fire risks in high rise living is a challenge for all designers/specifiers. Market leading balcony manufacturer, Sapphire, has invested considerable effort in developing balcony products to meet this challenge and dramatically reduce the spread of fire.

It’s estimated that some 45,000 London apartments have balconies, and with another 450 ‘tall’ residential buildings in the pipeline, balcony numbers are set to grow considerably. Demand for similar apartments in other big cities will raise the total still further.

Balconies add architectural interest to the exterior of apartment buildings and give residents a reasonably private ‘outdoor’ space, despite close proximity to neighbours. And while some people might see it as anti-social – even dangerous – behaviour, for others the balcony is the perfect place to enjoy a cigarette or a barbecue.

London Fire Brigade has expressed serious concerns about ‘balcony barbecues’ – many of which are sold online and with apparently no fire safety guidance. An uncontrolled flare-up from fat could be disastrous in the confines of a balcony. Fire brigade advice is not to barbecue on balconies – and certainly not to leave one to burn out, unattended. But other sources of fire – such as cigarettes and scented candles – can also be dangerous on balconies if used without due caution.

In some countries, balcony barbecues are actually illegal but, despite the additional burden they place on fire brigades, the damage they cause to other people’s property and – potentially – their danger to life, there is no such legislation in the United Kingdom.

The new, post-Grenfell regulations mean there is now a requirement for fireproof construction for all balconies on buildings taller than 18m or on a site boundary. Designers may also choose to apply the stricter regulations to buildings of less than 18m for ‘peace of mind’.

The core problem in ‘traditional’ balcony design is the need for a lightweight, bolt-on construction, often with exclusive use of timber for components such as joists, flooring, soffits, railings and privacy screens. All of these increase the risk of fire spread – especially during hot, dry weather.

So the real challenge for architects and developers is finding a balcony solution that meets the new standards and minimises the risk of fire spreading – whatever the cause – but without compromising design, complicating construction or increasing costs.

A system designed for safer living: the solution

Sapphire Balconies has pioneered a solution that ticks all these boxes – and more. As a result, if there is a balcony fire – whether caused by a resident’s irresponsible actions or any other event – there is a greater chance of containing the fire and limiting damage.

The Sapphire solution stems from ongoing research into fire performance. Sapphire also looks at more precise specifications to restrict the spread of fire and reduce the risk of more extensive damage to buildings and their contents – and the danger to life.

Much of Sapphire’s knowledge on this subject is available to architects and developers in a concise and downloadable 15-minute CPD presentation on balcony fires. The advice that Sapphire can offer at the design stage is designed to promote informed choices that balance the demands of safety, aesthetics and economics. It is part of Sapphire’s proactive approach to a problem that might in some cases also damage the reputations of developers and their contractors.

Lessons from the past are incorporated in the evolving design of Sapphire’s balcony systems which already promote the use of Class A components to minimise fire risk. The Sapphire Cassette system, for example, has been independently assessed by Dr Gordon Cooke, a chartered civil engineer and fire safety consultant. His view: “The construction can be considered of low fire load.”

All Sapphire Cassette system balconies are based on Class A-rated metal joists. The company has for some time recommended the use of aluminium soffits. Aluminium soffits have been shown in practice to reduce the possibility of rising or falling embers affecting balconies above and below a fire.

Through specialist decking company MyDek, Sapphire developed a Class A-rated ribbed aluminium decking solution for maximum safety. Sapphire continues to offer Enjura decking options, such as Class B wood plastic composite, for installations where a full Class A rating is not required. Whilst Class B WPC decking does not burn easily, and expert opinion is that fire does not usually spread across floors, even where WPC is allowable below 18m (under the combustible cladding ban), we would still strongly recommend considering the use of Class A decking and soffits.

Experts also say that balcony fires are more likely to spread when other combustible materials, such as soft furnishings, are ignited. A balcony fire in Greenwich is believed to have been caused by a cigarette igniting a beanbag seat. In this instance, the fire damaged only a small area of WPC decking – and the aluminium soffits above and below the fire prevented vertical spread.

Sapphire says the danger of balcony fires could linger in many existing apartment buildings for many years unless curbed by legislation or widespread replacement projects. Systems such as Sapphire’s Cassette can contribute significantly to a safer lifestyle in buildings now on the drawing board.