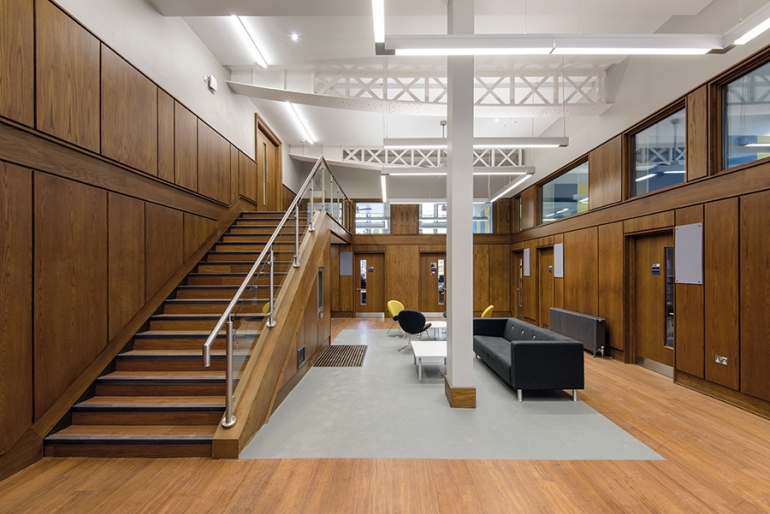 An achievement of architectural conservation

Following a £25m conservation and refurbishment programme, the Grade II listed Armstrong Building, which lies at the heart of Newcastle University’s campus, has not only withstood the tests of time, but is one of seven buildings in the North East which have made the shortlist for this year’s RIBA awards.

he historical value of the Armstrong Building is high. Located at the historic core of Newcastle University and named after William George Armstrong, a pre-eminent industrialist, scientist, inventor and philanthropist, it is a Gothic revival building, which epitomised the idea of the redbrick university.

Constructed in four phases, commencing in 1889 with the final phase in 1910, it was the first substantial purpose-built accommodation for the College of Physical Sciences, which later became the University of Newcastle. It embodied the spirit of local ambition to improve education in the fields of science, manufacturing and agriculture, which were regarded as vital to the country’s place on the world’s stage at the time.

Over the last 100 years, the building has been heavily used, frequently modified and adapted by the university to accommodate new uses. Although listed Grade II in 2000, many of its original architectural features were either lost or concealed. The building is now home to the university’s music department.

The rationale for refurbishment

The aim of the £25m programme of alterations and repairs was to restore key spaces, create new ones and remove decades of piecemeal alteration. For example, the central quad, which had become a service yard, was reinvented as a bright courtyard where there now stands a statue of Dr Martin Luther King Jr, commemorating the 50th anniversary of his visit to the university on 13th December 1967 when he received an honorary degree.

The team behind the restoration

The concept architect for the refurbishment was Design Office, a novel design research consultancy based in Newcastle University’s School of Architecture, Planning and Landscape, whose academic expertise as architect-historians informed their conservation approach and encouraged them to look for novel research opportunities.

A ‘routes and rooms strategy’ guided the design, employing traditional materials of timber, brick and stone in contemporary ways, to reinforce the legibility of routes and spaces that had become carved up over time and emphasising key rooms as memorable places.

By opening up existing features, it became possible to reinforce the role of key public rooms as destinations and points of orientation by connecting these rooms with routes that have clear hierarchies of doors and materials, using oak timber panelling for example, to highlight what is a major route and what is not. These works involved exposing existing corridor archways that had been blocked up and lost over the years, reinstating them to their former glory.

Howarth Litchfield also undertook a condition survey of the external fabric of the building in order to ascertain the repair works required to the external facades of the building which consist of smooth red facing brickwork with narrow lime mortar bed joints and perpends, stepped stone heads and ashlar facings and details. As part of the restoration works undertaken, mortar pointing to the brickwork and stonework was carried out where required and the stonework repaired.

Blending the old with the new

A planned programme of window replacement was implemented, removing the existing single glazed metal framed units and replacing them with new double-glazed bronze framed units. This was to offer a good reduction in the building’s heating energy requirement.

The new build elements in the design were the proposed entrances in the Armstrong courtyard and the associated ramps and landscaping to provide a new entrance foyer of the scale and status expected of a main entrance to a key building in the university and to allow the building to continue to serve the needs of the university in the 21st century.

The entrance doors are fully glazed with natural oak frames. The use of timber for the entrance doors reflects the timber used on the entrances to the existing building. The roof of the new entrance is fully glazed to its perimeter, with an inward pitch of 5º, falling towards a flat roofed central area which has a natural stone finish to provide a more pleasing appearance when viewed from above.

The courtyard at the centre of the building was redesigned to link the building entrances in order to provide an accessible route to and from King’s Hall which is used within the building for key events such as degree congregations and regular music concerts.

Design Office Associate, Yasser Megahed was inspired to research into the different values of the various project consultants and construction professionals when he heard them talking about the value of design in the project’s progress. He used a graphic novel format to record some of the disagreements in project meetings and to illustrate why key design decisions on major projects get made which can later affect people’s lives.

A second opportunity arose for Design Office when it became clear that previous ad-hoc refurbishments of the Armstrong Building, some of which the project removed, used default standard architectural elements familiar from any British office building – carpet tiles, suspended ceilings, fluorescent lights, plastic trunking and skirtings.

Kieran Connolly, Design Office Associate, became fascinated by this architectural palette, often driven more by risk-aversion and minimising maintenance than the quality of space. He focused particularly on the suspended ceiling as the ultimate ‘architectural default’, criticising how ‘defaulting’ has so often become a standard process in institutional settings.

Newcastle University’s Armstrong refurbishment is not only an academically-informed architectural conservation project but has developed the frustrations of every day practice into novel research.

Professor Adam Sharr, Principal of Design Office and Head of School, said: “We’ve turned the challenges that architects face daily into academic research. Our struggles to persuade others in the consultant team to prioritise design ideas got turned into a graphic novel, exploring the values at work in the industry. Our fascination with the suspended ceilings which previous generations had rammed through historic spaces in Armstrong encouraged us to research the history of this often-unnoticed element.

“The project shows how Design Office not only offers clients rigorous professional expertise, but also engages in original and significant architectural research for the benefit of the profession, the academic community and users of the buildings.”

The Armstrong Building is an achievement of architectural conservation, which makes an important contribution to student life, engagement and inclusivity, renewing the historic identity of the university and the city.

Neil Turner, Director, Howarth Litchfield, added: “We enjoyed being part of the University team in working through the concept ideas and seeing their research and commitment through to the finished construction. It’s a beautiful old building that I remembered as a student from the 1980s – one we never entered or used – but now awash with activity, life and students. We were delighted that our conservation skills could assist the university in this fabulous project.”