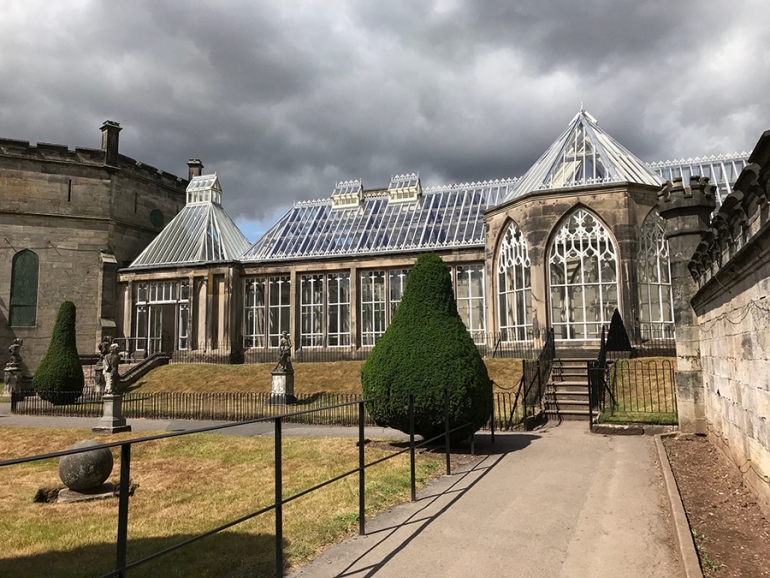 Today, Alton Towers is best known as a theme park resort, home to Nemesis, Oblivion, The Smiler and new for 2018, Wicker Man. Yet, before the Corkscrew revolutionised the park back in 1980, the estate had been the property and home of the Talbots, Earls of Shrewsbury, for 700 years. At the heart of the park sits a reminder of this heritage, the iconic Towers, one of the greatest examples of Gothic Revival architecture in Britain.

hroughout its history, the Towers has endured endless improvements, renaming and extensive remodelling by numerous earls. The transformation of the once modest, Alveton Lodge began around 1800 with works commissioned by the 15th and later, the 16th Earls of Shrewsbury. It was during this 50 years of intense reconstruction that the Lodge changed name for the first time, becoming Alton Abbey, a reflection of the style and scale of the developments.

One of the most architecturally important works during this building phase was the conservatory. The Gothic transformation of Alveton Lodge into Alton Abbey saw great many romantic and fanciful additions to the house. Architect Thomas Hopper was responsible for the conservatory – a dramatic expanse of glass, iron, wood as well as local building stone.

Dated around 1815 to 1817, the conservatory is a significant feature of the south side of the house. Built in the Gothic style, with a glazed fan-vaulted ceiling believed to be inspired by the chapel at Westminster Abbey, the conservatory would become a key feature for visitors; filled with exotic plants, flowers and birds.

The conservatory was built of stone, with iron-framed windows and a glazed timber roof. It comprised three elements, two long glasshouses linked by an octagon with Gothic windows. A fourth element was added later, in 1824, to connect the conservatory with the new Octagon Gallery.

The birth of the Towers

However, after the death of the 15th Earl in the late 1820s, the house underwent its largest development, effectively doubling the size of the building. It was at this time that the Abbey became known as the Towers, as the architecture moved away from the monastic style of the early 1800s and instead, adopted a more Medieval appearance. This incarnation is now familiar to millions of tourists around the world as the centrepiece of Alton Towers Resort.

Fast-forward 100 years and the estate was sold to a group of local businessmen. The outbreak of the Second World War saw the Towers and land requisitioned as an officer cadet training camp. They remained a possession of the Ministry of Defence until the mid-1950s. After this, the estate set about re-establishing itself as a popular tourist attraction throughout the 1960s and 1970s, before the revolutionary arrival of the Corkscrew ride in 1980.

As part of its commitment to preserving the site’s historical features, the resort commissioned the restoration of the house conservatory in late 2010, including the reinstatement of the whole roof, using a timber structure with aluminium glazing bars. As the buildings were listed, the conservation officer was looking for sections which reflected the original form of the roof lanterns, as far as was practicable. It was proposed that the lanterns were constructed in powder-coated aluminium with single glazing.

After a stringent tender process and submission of section details and examples of similar lanterns to the planning officer, Howells Patent Glazing (Howells) was appointed manufacturer and supplier of the roof lanterns. Working alongside Staffordshire-based contractor, Seddon Construction, Howells was tasked with producing and installing the roof in just four months, completing the contract prior to the new tourist season.

To meet the slim, pencil-line requirements of English Heritage, the patent glazing specialist adapted its popular HGR 1 rafter bar to create a bespoke glazing system. The 37.5mm slimline aluminium glazing bars sit on the wooden rafters so the view from below is timber, as it would have been originally. To complement the mullions, crestings were designed specifically for the conservatory featuring fleur-de-lis. These were profile cut from 6mm aluminium. The aluminium bars and crestings were powder coated in RAL 9010, an off-white satin finish.

That was seven years ago; since then the conservatory has been a magnificent spectacle for the many thousands of visitors passing through the Staffordshire tourist attraction. David Rhodes, Head of Buildings and Estate at Alton Towers, comments: “With regard to the roof, we have had no issues over the past seven years, and it is performing as expected.”