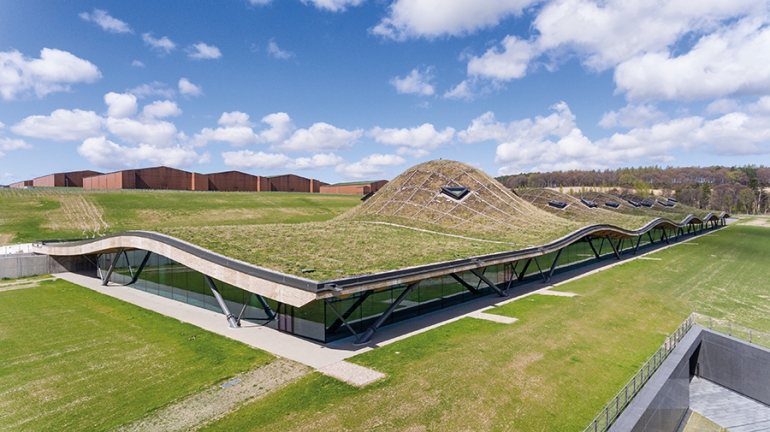 Scotland – synonymous with pristine landscape, harsh weather and, of course, whisky. Whisky has been distilled in Scotland for hundreds of years.

he Macallan Distillery on the lower reaches of the Spey has been making whisky since 1824, making it one of the oldest licensed distilleries in Scotland. Among connoisseurs, the Macallan single malt whisky is regarded as a prized possession. It is no surprise that in 2014 the Macallan brand created a world record for the most expensive whisky bottle ever sold in an auction.

In 2012, the Edrington Group, owner of Macallan since 1999, announced an extension of the existing distillery and a new visitor centre.

In an international architectural competition to design the new building, London-based Rogers Stirk Harbour + Partners’ proposal was chosen. The firm’s design is a tribute to the beautiful Scottish landscape and whisky production in Scotland.

The overall design of the distillery is a masterpiece in itself. The building has a very inclusive design, but few would argue that one of the main design features is the roof of the building. The imposing dome roof – one of the largest green roofs in Europe – blends seamlessly with the surrounding landscape.

The dome roof, with an area of 12,300m², is designed as an expanding green roof which is supported on a steel and wooden construction. The green roof covers 12,300m². The eaves of the roof are located 13m above ground level. The roof has in total of five domes with a cantilevered canopy. Four of the domes are 18m high, and the fifth one is the tallest at 27m. The biggest dome envelopes an exhibition area, a visitor centre with a cafe, shop and a bar.

The Macallan project was an ambitious project from the onset. The roof is designed to cater to the vapour created by whisky distillation. As a result, the roof panels are designed to move with the expansion and contraction created by these movements. The roofing system was specified with a bitumen system and the waterproofing layer was designed to be laid over timber component. Later in the project, the system was rejected because the bitumen-based system could not accommodate the extremes of movement required and couldn’t comply with the criteria.

Carlisle Construction Materials (Carlisle CM) proposed RESITRIX hybrid EPDM membrane and roofing system. By composition, RESITRIX’s hybrid EPDM is flexible and a long-lasting membrane with root-resistant qualities and can not only accommodate the expansion but would also keep the building watertight for decades.

Tasked to find a viable solution, Carlisle’s technical team produced a scale working model of the roofing system to reassure the contractor and architects.

“The deciding reason for using Carlisle roofing system was the fact it allowed for expansion without compromising on the waterproofing of the building. All the components within the system were tested and able to accommodate the expansion,” commented Stewart Orton, Carlisle’s Product Technical Manager.

“We took on the challenge and delivered. All the teams worked tirelessly, and as a result, the roof was completed on schedule,” added John Whittaker, Carlisle’s Head of Technical.

“For this complex project, we needed a new approach and chose a parametric design to realise the complex geometry,” says Erich Wiesner, Owner and Managing Director of WIEHAG.

The roof is made from 1800 beams all precisely cut to fit together without screws or glues. A further 2700 roof elements and 380,000 individual components were made by component manufacturer WIEHAG in its factory in Austria and transported to site.

As a supporting structure for the roof, a tubular steel sub-frame, a sub-structure was designed. On to this sub-structure, the raised octagon wooden structure is placed. The framework of the rectangular roof elements are made of solid timber, and the underside of the timber structure is made from a 15mm laminated veneer.

The individual roof panels were formed as a sectional cassette, each cassette was made in an unequal triangle shape to form the dome shape required. Each cassette was fixed with one pivoted anchor which allowed the panel to move independently of the surrounding panels. ALUTRIX 600 vapour barrier membrane was used as a full vapour check to prevent the steam and vapours from the whisky production, which can cause condensation problems within the roof cavity.

The movement of these panels was overcome by using RESIFLEX SK expansion strips, which allowed the movement of up to 40mm in every direction bonded to the joints of the panels to complete the air seal. 150mm-thick insulation was bonded directly to the ALUTRIX 600 using FG35, Carlisle’s insulation adhesive, and the expansion gaps were completed with a system developed by Carlisle’s technical team.

The final waterproofing layer of the roof construction was completed with RESITRIX SKW full bond hybrid EPDM adhered to the insulation and heat welded at junctions and laps.

The highest dome posed a challenge with a 45° slope at its steepest section. The steep pitches of the domes were easily walkable due to the slip resistance of the RESITRIX membranes.

In 2017, the Macallan Distillery project scooped two awards at the UK Roofing Awards hosted by the National Federation of Roofing Contractors (NFRC). Carlisle CM won the ‘Single Ply Roofing Award’. The project also won the ‘Green Roofing Award’. Projects were judged on several categories including workmanship, safety, complexity and the challenges they overcame.

“We are so proud to win the award in the Single Ply Roofing category but what is equally impressive is that the same project also won an award in the Green Roof category, which is a testimony of the far-reaching benefits of our products and especially our hybrid EPDM,” stated Duncan Kirkwood, Managing Director of Carlisle Construction Materials.