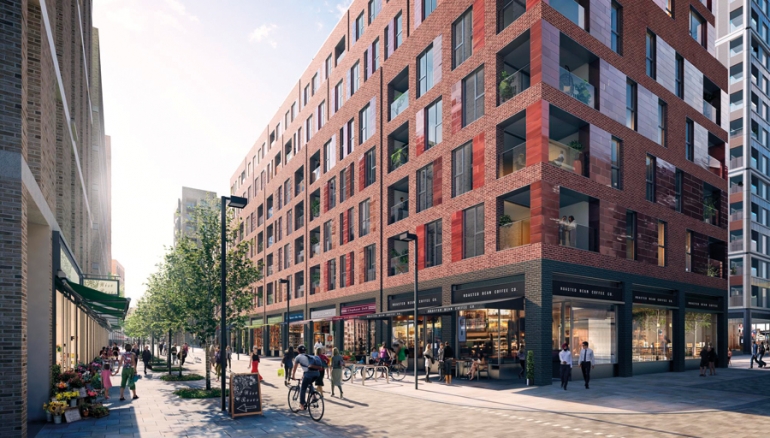 Adrian Storey, General Manager at Horbury Facades, looks at how innovation in modern rainscreen cladding materials is resulting in a rise in brick slip facades.

ating back to 7000 BC, and originally made from dried mud blocks, bricks are one of the oldest known building materials. The clay bricks that we commonly use today were made popular by the Roman Legions, who operated mobile kilns and built large brick public and private structures throughout the Roman Empire. They built walls, forts, cultural centres, vaults, arches and faces of their aqueducts.

The Herculaneum gate of Pompeii and the baths of Caracalla in Rome are great examples of Roman brick structures that still stand to this day. During this period, the art of brickmaking was spread throughout Europe, where it became one of the most common construction materials. However, fast-forward to the modern era, and bricks seemed to lose their appeal, particularly in the early 2000s when they were considered old-fashioned by many contemporary architects, who often favoured steel or glass finishes.

After World War II, brick was scarcely used for anything other than house-building and, the extensive bombing of cities like Birmingham, Coventry, Hull and Sheffield led to the development of ‘concrete cities’ in the post-War period.

In the 1950s and 1960s, the trend was to reinvent these cities with modern building designs and techniques and Brutalist architecture was born (stemming from the French word for raw concrete ‘brut’). Typical examples of Brutalist architecture include the Guoman Tower near Tower Bridge in London, Park Hill flats in Sheffield, Trellick Tower in London and the Mancunian Way flyover, to name but a few.

Now, 60 years on from when Brutalism had its heyday, innovative cladding techniques are providing a way of breathing new life into these cities, many of which are currently undergoing major city centre regeneration and redevelopment; and one of the most popular finishes chosen for these projects? Brick.

Brick slips are thin sections of brick that are bonded onto a rainscreen panel, which together imitates the look of conventional brickwork but with considerably less weight, cost and labour required to complete the development.

Highwood Garden Terrace is a great example of a modern development that features a seemingly traditional facade, made from modern materials. The 10-storey mansion-style building contains 85 homes and is situated on the West Grove residential development on Elephant Park in London; the new £2.3bn multi-phase regeneration of the former Heygate Estate based in Elephant and Castle.

The scheme is a major mixed-use development that will create almost 2500 new homes and the largest new park in Central London for 70 years. West Grove, which is due for completion in 2019, is the second phase of the development and will contain 593 homes in total.

The Highwood Garden Terrace development features an inspirational brick slip Corium facade in grey and red in assorted textures. Glazed terracotta tiles in seven varying shades that graduate from buff to a dark red are also fixed onto playfully arranged infills in a staggered bond of differing lengths. The design of the structure is inspired by traditional London mansion blocks and incorporates a number of tiers where the building steps back to offer terraces to many of the homes.

Aside from the aesthetics that can be achieved with brick slip, the material is more commonly used for larger residential developments as it enables builders to complete projects more quickly.

According to official statistics published in March by the House of Commons, 78,930 families were living in temporary accommodation at the end of December 2017. This includes 120,510 children, representing a 75% increase since 2010. With the number of people without a permanently fixed abode in England rising, the pressure is mounting on local authorities and developers to build new accommodation quickly and cost-effectively to alleviate the problem.

As such, materials that will offer not only great aesthetics but also enable new residential developments to be completed sooner are highly sought-after. Due to its simplicity to install, covering a building with brick slip is vastly quicker than bricklaying. This not only enables earlier project completion but also reduces the costs incurred in areas such as waste disposal, deliveries and storage requirements. Furthermore, as brick slip panels are factory-made, the quality of workmanship is also expected to be higher than traditional brickwork.

Brick has been used as a building element for centuries and although it fell off the architect’s radar for a while, the finish it provides is sought-after now more than ever. With a need for more cost-effective and energy-efficient buildings to be completed in less time, however, we are seeing most new developments that require traditional facades now include brick slip panels as an aesthetically pleasing alternative to the actual material. As such, the rise in specification of this type of facade looks set to continue.