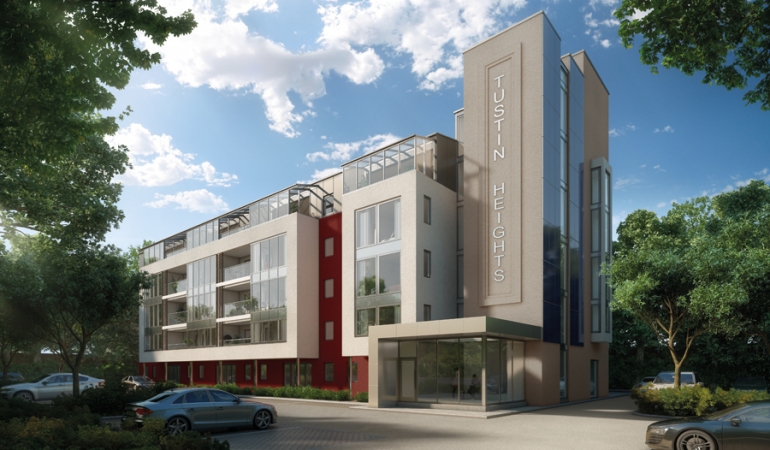 In 2015, the Government announced new measures to make it easier for developers to turn underused or derelict office buildings into new homes. While this relaxation of planning policy has opened up more possibilities for new town and city-centre accommodation, developers going down this route require a formidable creative touch to transform dated office blocks into desirable residential properties. Here, Steve Tonkiss from REHAU looks at how the clever use of modern glazing can give developers an edge.

hen the Housing and Planning Minister Brendan Lewis MP announced the permanent introduction of permitted development rights, there was much for developers and home-builders to be glad about. Planning permission would no longer be required to turn office buildings into residential homes, helping them to not only deliver schemes more quickly but also to breathe life back into buildings and communities where the need for regeneration was greatest.

The only real catch for developers is that often the derelict and underused office buildings up for grabs do not lend themselves to residential use. Many have dated, unappealing architecture and little or no kerb appeal, so developers require a creative approach to transforming both the interior and the exterior of such problematic buildings.

One example of a project like this is Salter Heights in the Lancashire seaside town of Lytham St Annes. Preston-based developer Tustin Developments acquired an office building in the town once used by HM Customs & Excise which had stood empty for five years, with a view to converting it from a drab and dated office space into aspirational luxury apartments.

The building – formerly known as Petros House – was structurally sound so Tustin Developments could keep the floor slabs, support columns and stairwells intact. However, the outside of the building was very uninspiring, and the developers needed to find a solution which would transform the front facade as cost-effectively as possible.

The architects on the project opted to soften the stark lines of the 1960s building with the addition of balconies and winter gardens, all drawn together with modern rendered facades, large sections of glazing and aluminium-effect REHAU windows and doors. The large expanses of glass would offer an on-trend contemporary finish and completely transform the front elevation, while each of the luxury apartments in the building would be flooded with light – a must-have requirement for many modern homebuyers.

To achieve the glass front effect, Tustin Developments required curtain walling across large sections of the building, so they spoke to local fabricator and installation company, Per-Fit, about possible solutions. Per-Fit suggested REHAU’s Polytec 50 curtain walling system, a thermally-efficient sub-frame which is steel-reinforced to make it structurally very sound and ideal for the five-storey Salter Heights development.

Most curtain walling systems are aluminium, but REHAU’s Polytec 50 uses a composite system, with aluminium external cover caps and steel for structural strength, making it three times stronger than aluminium (in terms of its E-Modulus in N/mm2). PVC-U is used for the internal surfaces on the Polytec 50 installation to improve the thermal performance of the curtain wall, ticking the efficiency box for developers. In fact, Polytec 50 can achieve a U-value of up to 0.8W/m²K, making it suitable for Passivhaus projects and zero-carbon buildings.

The creative transformation of the exterior of the Salter Heights scheme didn’t stop with the curtain walling, as the aesthetics of the doors and windows were also carefully considered to create a contemporary edge for the residential scheme.

One of the hottest trends in PVC-U windows right now is for colour windows, and over the past two years, the biggest growth has been in sales of black and grey foils. These give PVC-U windows the modern and minimalist look of aluminium windows, but without the drawbacks such as the added cost of real aluminium windows and the reduced thermal performance. Darker foils also soften the appearance of sightlines.

Following this trend, the PVC-U flush fit, fully reversible windows fitted at Salter Heights have been given a smooth anthracite grey foil finish. The laminate has only been applied to the outer surface of the windows, so that the inside remains white, bright and clean for residents, delivering a solution which is aesthetically pleasing from both inside and outside of each apartment.

The ground floor apartments are fitted with large-span multi-fold patio doors from REHAU’s AGILA range – also with a smooth anthracite grey finish – complementing the windows and curtain walling and creating a continuity of design across the exterior of the building.

With the Salter Heights scheme, Tustin Developments has transformed a tired and uninspiring office building into a modern, aspirational residential complex and shown other house-builders and developers what can be achieved with a creative approach which adopts the latest glazing trends.