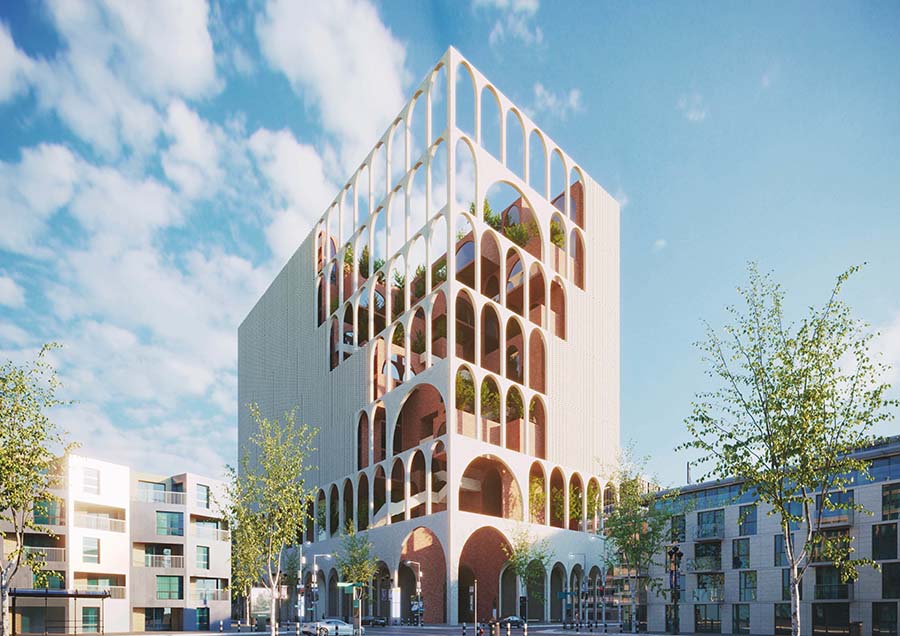 Designed by RVAD Studio, the design of Tagh Behesht in the city of Mashhad, Iran, began with an investigation into the architectural history of bazaars in the Western Asia country. The unbreakable bond between the city bazaars and the foundations of the economy has led to these Greater Middle-Eastern markets taking on an important and consistent role in people’s daily lives.

Tagh Behesht is inspired by local Mashhad-based markets – such as the Sarshoor, Farsh and Reza bazaars. The key characteristic of these bazaars is the porch-like entrance hall that guides visitors inside. These individual arches and porches lead to the bazaar’s main entrance, while vaults cover large openings, which is another visual feature of Iranian markets. The brick mesh, which acts as a second shell, obstructs unpleasant light from the east and west while still filtering a mild level of light into offices.

To achieve the breathtaking scheme, RVAD Studio studied the centre of Mashhad for its historical significance and notable staircase structures – the latter of which follows the city’s geographical location amidst the mountain hillsides. The balconies on residents’ houses in these mountains are chained together in a layered style. This arrangement significantly contributed to the core of RVAD Studio’s tiered garden design.

Today, social functions and activities play a significant role in our lives. Iranian cities, including Mashhad, critically demand a public realm that nods to socialisation and collaboration. To plug these deficiencies, one of the essential design elements for this city-centre structure was to produce accessible and appropriate public spaces. Due to the absence of such locations, RVAD Studio has presented a brand-new perspective on public urban spaces to the area’s residents.

Working with the location

Mashhad has an insufficient supply of green spaces. Primary footfall takes place in areas such as the city’s public bazaars and its business districts, which are all positioned in the city centre. Considering this, RVAD Studio has designed Tagh Behesht as a new type of ‘commercial complex’ with a more earnest outlook towards Mashhad’s public spaces.

The site itself has a high potential to expand into an urban hub, given its proximity to one of Mashhad’s few public recreation grounds, Mellat Park. The presence of adjacent Mellat Park – the city’s most prominent green area – has allowed RVAD Studio to clear a visual path to the park to create scenic views and more accessible gateways for visitors. This route, which the firm has dubbed the ‘layered park’, is inspired by the formation of houses in the nearby village of Kang, where ground-floor storeys are connected to the upper sections of housing via footpaths.

One of the project’s main features is its connections to the city, using pedestrian bridges to create safe and enjoyable walkways. The essential principle behind these bridges is to incorporate nature and green spaces as platforms situated in varying areas around the building, resulting in a more pleasant experience and a net-positive environmental effect.

Meanwhile, the flat middle garden in the centre of the building – which resembles a city junction – is the intersection between suspended pedestrian bridges. This highlight invites the city in and, ultimately, connects the business floors and bazaars.

A break with convention

An impressive concluding element of this project is the suspended courtyards situated between the office areas, which provide a communal, green space for all floors and business units and deliver sufficient daylight to offices. RVAD Studio’s main concern was to ensure the sufficient distance between business units to allow for a beautiful and open landscape. This design concern has never been considered in any of Iran’s existing office buildings.