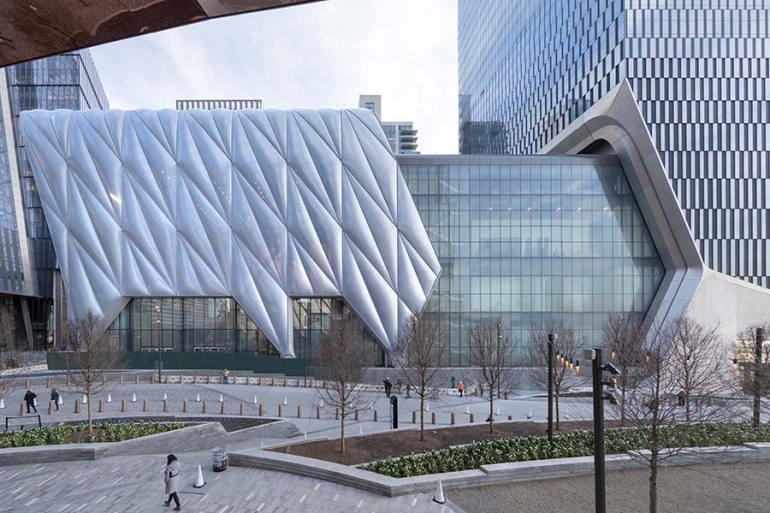 A work of art

The Shed is a non-profit cultural organisation that commissions, develops and presents original works of art across all disciplines for all audiences. Its building – an innovative 200,000ft2 (18,500m²) structure designed by Diller Scofidio + Renfro as lead architect, and Rockwell Group as collaborating architect – can physically transform to support artists’ most ambitious ideas.

Its eight-level base building includes two levels of gallery space; the versatile Griffin Theater; and The Tisch Skylights, which comprise a rehearsal space, a creative lab for local artists and a skylit event space. The McCourt, an iconic space for large-scale performances, installations and events, is formed when The Shed’s telescoping outer shell is deployed from over the base building and glides along rails onto the adjoining plaza. The Shed’s open infrastructure can be permanently flexible for an unknown future and responsive to variability in scale, media, technology and the evolving needs of artists. Here, FC&A takes you on a tour of the architecturally striking arts centre.

The main entrance to The Shed is on the north side of West 30th Street via an 8000ft2 (743m²) lobby, nestled under the High Line. The lobby features a bar (Cedric’s at The Shed), a shop (McNally Jackson at The Shed) and ticketing area. Loading docks with two full truck berths and a large freight elevator are located on street level, accessible from 30th Street to the east.

The entrance on the north side of The Shed provides convenient access to the 34th Street Hudson Yards subway station. It features a coat check and provides access to the lobby.

The McCourt and plaza (level 2)

When needed, the telescoping shell can deploy from its nested position over the base building, and glide along rails onto the adjoining plaza.

When the movable shell is deployed from the base building it creates The McCourt, a 17,000ft2 (1600m²), light-, sound- and temperature-controlled space for large-scale performances, installations and events. The McCourt can accommodate an audience of approximately 1250 seated and more than 2000 standing; flexible overlap space in the two adjoining galleries of the base building allows for an expanded audience of up to 3000. The shell’s entire ceiling operates as an occupiable theatrical deck with rigging and structural capacity throughout. Large operable doors on its north and east sides allow The McCourt to function as an open-air pavilion. The McCourt can be combined with the adjacent gallery on level 2 to create a nearly 30,000ft2 (2,715m²) contiguous space.

When the movable shell is nested over the base building, the 20,000ft2 (1860m²) plaza will be open public space that also can be used for outdoor programming; the eastern facade can serve as a backdrop for projection with lighting and sound support. A large-scale, site-specific work by Artist Lawrence Weiner (b. 1942) is embedded in the plaza, serving as a walkable outdoor area when the shell is nested over the fixed part of the building, or as the base of The McCourt when the shell is extended to the east. The 20,000ft2 (1860m²) work is titled ‘IN FRONT OF ITSELF’ and features the phrase in 12ft-high letters. The plaza is equipped with a distributed power supply for outdoor functions. Oversized deliveries can be brought by truck up Hudson Yards Boulevard and loaded directly onto the plaza and into the base building or the shell when deployed.

Graphic design and wayfinding: Other Means

The Shed features two expansive and flexible, column-free galleries on levels 2 and 4 of the base building, totalling more than 25,000ft2 (2340m²) of museum-quality space with 19ft-high (6m) ceilings. Operable east-side walls can conjoin the galleries with The McCourt to accommodate space or seating needs.

An 11,700ft2 (1080m²), sound-isolated black box space can be used as a single large theatre with 500 seats or subdivided into two smaller theatres that can host concurrent events. Direct access to the large freight elevators allows for easy production load-in/load-out.

Back of house (level 1 and lower levels)

The Shed’s back-of-house spaces, which include offices, mechanical spaces, dressing rooms and storage, are located on level 1 and the lower levels of the residential tower to the west, 15 Hudson Yards (designed by Diller Scofidio + Renfro as lead architect, and Rockwell Group as lead interior architect). This allows the bulk of The Shed’s base building to be devoted to programmable space for art.

The Shed’s 120ft-tall (37m) movable shell is made of an exposed steel diagrid frame, clad in translucent cushions of a strong and lightweight Teflon-based polymer, called ethylene tetrafluoroethylene (ETFE). This material has the thermal properties of insulating glass at a fraction of the weight. The Shed’s ETFE panels are some of the largest ever produced, measuring almost 70ft (21m) in length in some areas. The Shed has an energy-conscious design using a radiant heating system within the plaza construction and a variable forced air heating and cooling system serving the occupied portions of the shell for maximum efficiency. The building is designed to achieve LEED ‘Silver’ certification and to exceed New York’s energy codes by 25%, which is required of all new buildings on city-owned land or using city-provided funds. Despite the Shell’s two-million-cubic-foot interior, only the lower 30% will need to be temperature controlled. The plaza has a radiant-heat floor plate.

The Shed’s kinetic system is inspired by the industrial past of the High Line and the West Side Rail Yard. Based on gantry cranes commonly found in shipping ports and railway systems, the kinetic system comprises a sled drive on top of the base building and bogie wheels guided along a pair of 273ft-long (83m) rails on level 2 (plaza level).

The movable shell rests on six large bogie wheel assemblies – four single-axle and two double-axle bogies. The bogie wheels measure 6ft in diameter and are made of hardened forged steel. The weight of the shell is spread across the bogies, each of which carries more than one million pounds on a surface area approximately the size of a pair of human hands.

The sled drive, housed on the roof of the base building, is a rack-and-pinion system with 12, 15-horsepower motors, totalling 180 horsepower (for comparison, a Toyota Prius develops 134 horsepower). The deployment of the shell takes five minutes at a peak speed of a ¼ mile per hour. The system is run by a secure wireless remote and back-up hardware controls.