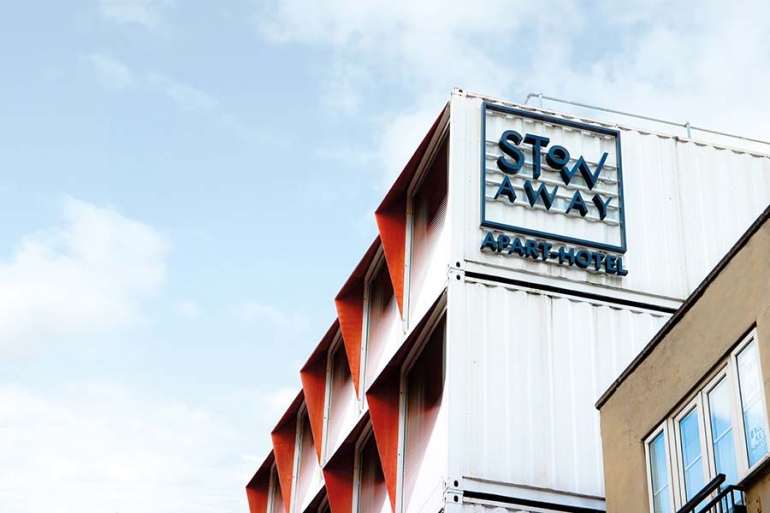 Be Our Eco-friendly Guest

This month, we sit down with Henry Pescod, Project Director at Stow Projects, to find out more about Stow-Away, a completely recyclable eco apart-hotel in London’s South Bank that’s made out of repurposed shipping containers. 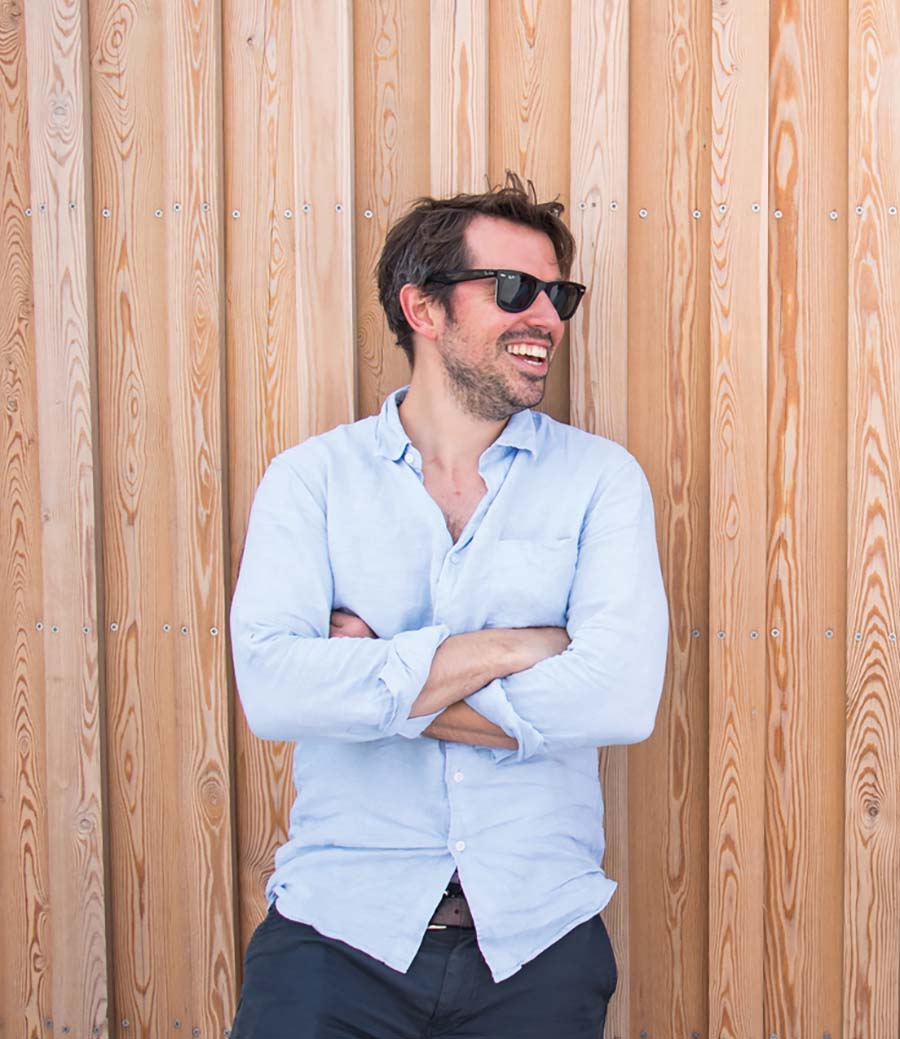 Tell us about Stow Projects.

Stow Projects is a family business set up 10 years ago as a property development and urban regeneration company by Charlie Fulford and his father, Bill. Bill co-founded Camden Lock Market in the early 1970s and operated the market for 40 years before selling in 2015. Charlie and Bill have also founded and run several property companies involved in mixed-use urban regeneration schemes throughout London.

I met them in 2012 when hired as a Property Analyst at Camden Lock Market before joining Stow Projects after the sale. Following similar principles to what made Camden Lock Market a success, we launched the Artworks in 2014 to revitalise underused spaces in London and transforming them into creative workspaces and social hubs. The first site in Elephant & Castle (now closed) reused 40 shipping containers from a housing scheme in the Netherlands. Working closely with Lendlease, the scheme ran for five years providing F&B and office studio space for new businesses and residents as part of the regeneration of Elephant & Castle. The second site in Deptford (Creekside) is still going as a diverse creative and commercial workspace that houses F&B outlets, a vertical hydroponic farm, alongside a growing number of design studios, agencies and filmmakers. In 2018, we opened our first Stow-Away and are now fully focused on operating and growing that into a successful apart-hotel brand in multiple locations. Now, as Project Director, my role is to find new sites and oversee the operations of Stow-Away.

How did Stow-Away, the apart-hotel, come about?

Stow-Away is an eco-friendly apart-hotel in London’s South Bank, built to be sustainable from the ground up. The building is made from repurposed shipping containers – all repurposed and designed to run as carbon-neutral as possible.

The project came about through Charlie’s relationship with Network Rail (now The Arch Co.) following a previous joint venture. We had become interested in hostel and hotel opportunities with longer operating potential (not just the five to 10 years we had been used to with creative studio spaces). We had noticed a rising trend in the travel industry, predominantly among young professionals, of global nomads. We were inspired by projects like Zoku in The Netherlands that provide a “home-office hybrid with hotel services”. These are small yet functional spaces to live (and work) in a central city location, from a few days to a few months without breaking the budget.

Network Rail had a vacant plot of land by Waterloo station that had been under-utilised since the war that seemed the perfect location for both holiday and business travellers. Stow-Away came from this idea of providing intelligently-designed studios around fun communal spaces (in our case, a wine bar!) for travellers to enjoy the city for business or leisure.

We already had experience working with shipping containers from projects like the Artworks, and we witnessed how popular they were with tenants and customers. With some smart design, we thought their size and shape could be well suited to a hotel - and so the ‘Stow-Away: Apart-Hotel’ was born!

Can you tell us a bit more about the brief for the project?

The brief was the idea of a modular building using sustainable materials and to have a positive environmental impact. We decided to go for a modular structure that can be dismantled and utilised elsewhere in the future due to having a long lease rather than owning the site freehold.

Our electricity supply on site is solely from renewable energy suppliers. The roof has solar panels which generate electricity for the site and transfer any excess electricity back into the national grid. The air conditioning and hot water system recycles and recirculates energy to reuse excess heat from the air conditioning system to heat the hot water, reducing overall energy consumption. The rooms themselves are lined with eco-friendly timber cladding.

All the waste from the hotel and the on-site restaurant is recycled – such as plastic, glass and paper – working with First Mile charity, who are leading the way in this field. Recycling bins are placed in all the rooms to make it easier for guests to separate their waste. Finally, to minimise plastic use, large refillable bottles of shampoo and shower gel are provided in each bathroom.

What challenges did you face during the build and how were these overcome?

Our interest in modular building meant that we could complete much of the building off site and crane the shipping containers into position. Without Network Rail as our freeholder, we wouldn’t have got the site but with that, came some additional considerations. A huge priority for them, with the area close to the station, was, of course, to make sure that the rail line remained unaffected. The construction works had to be delivered in line with detailed method statements agreed in close collaboration with Network Rail.

There was also a concern about a shipping container’s ability to remain warm and quiet inside – critical requirements for a good hotel. Shipping containers are designed in a very practical way to carry freight, and in their simplest form are not great at insulating heat and sound. Therefore, one of the biggest challenges for us was to combat this. We put extra seals around the doors to ensure a quiet night’s sleep. We also had to meet the planning authorities’ requirements to waste as little energy as possible. This meant we put a tremendous amount of effort into the heat insulation with layers of foam and timber lining the walls, and extra-thick double glazed glass windows which are the same spec as those used in The Shard. This challenge pushed us to use the very best in materials but as a result, turned the shipping containers into habitable and even luxury apartments.

Building with recycled materials is tricky. Using second-hand shipping containers meant that although in theory, each container should be the same size and shape and easy to build with, the reality was containers get bashed and dented in their lifetime and each one exhibits small differences which can create problems in precise design. For example, as part of our design, we tailored high-spec blackout blinds in each room which were all discovered to be slightly ‘off’ as each container was marginally different in size and required a lot of fine-tuning to get right. Things like that always crop up when you actually get into the build phase.

What advice do you have for anyone wishing to embark on similar projects?

My biggest piece of advice would always be to keep the end-user in mind, which was how hotel staff and guests would use the building. A hotel operation is very different from a residential building. At one point, we were considering wooden parquet flooring for the interior design before realising that the cleaners’ regular mopping would have completely destroyed this in a matter of months!

Is there anything about this project that you’ll be applying to future projects?

What are your future plans?

We are actively seeking new sites at the moment but keeping it London-centric for now. We aim to have what we’re calling a ‘hub and spoke’ model with the main hub surrounded by four to five smaller Stow-Aways around the city, all at a three- to five-mile radius of the centre.

In locations that aren’t so central to London’s landmarks, we can focus on more of an extended stay-type model with many of the same principles of fusing design and technology to run projects as efficiently as possible. But for now, with the pandemic hitting the hospitality industry extremely hard, we’re looking forward to re-opening doors when restrictions lift and getting back to ‘normal’.