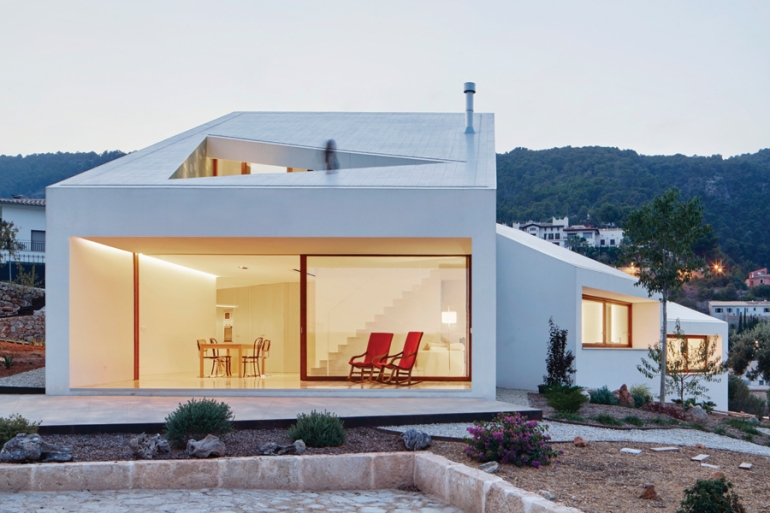 Winners of the 2016 Tile of Spain Awards

oth the quality of the judging panels and the standard of the winning projects have established these awards, organised by ASCER, as a notable reference both in Spain and internationally.

First prize in the Architecture category has been awarded to two Oropesa homes which utilised ceramic tiles with outstanding precision to give these heritage properties a unique appearance. Meanwhile, first prize in the Interior Design category has been achieved by the TABA Espazioa gastro space where the floors and bars have been innovatively covered with tiles in the style of rugs.

The judges for the Tile of Spain Awards for Architecture and Interior Design, chaired by Architect Gonçalo Byrne, have chosen ‘Two homes in Oropesa’ (Toledo) by Paredes Pedrosa Arquitectos to receive top honours in the prestigious Architecture category.

Embedded in a historical structure, created to link Oropesa’s castle and its church, a pair of small asymmetrical houses were fragmented and in ruins. As part of an extensive renovation by Paredes Pedrosa Arquitectos, ceramic tiles are used not just as a mere finish, but as a way of enveloping the project and making sense of its divisions. The panel of judges highlighted the outstanding precision of an architectural intervention within a complex historical context and a use of ceramic tiles that was fully fit for purpose.

Sitting in the foothills of the Sierra de Gredos in Spain, Oropesa commands an extensive view encompassing snow-capped peaks and olive trees. Oropesa is known for its castle, built in 1402 and formerly the residence of a noble family from Toledo. One of them built an arcade to link the castle with Nuestra Señora de la Asunción Church, where the houses are placed incrusted in the ancient walls.

Initially, three very small houses divided into various small rooms in ruin, shared two patios behind a facade that was maintained unchanged for years, crossed by large brick arches. On the inside, the houses lacked sufficient windows to cover lighting and ventilation.

The project transforms the interior spaces into two houses, that share one single long patio, open in one side to allow a view of the 16th century church tower as a backdrop. The facade could not be modified, due to heritage protection, and the new patio orders the two constructions and gives natural light to both houses. One of them has windows to the street and the other opens to a private small lateral garden.

Inside the houses, the ancient brick and stone walls, built with the traditional local rigging, were painted in white, considering the reasonable use of existing materials. It was sought to preserve the natural texture of the materials in order to better integrate them with the surrounding textures. The new staircases were built with steel sheet. Also, the roofs were fully disassembled, restored and re-built one meter higher, maintaining the wooden structure, to create a space under the roof.

In the patio area, the old water well is maintained and both the pavement and the lower part of the damaged ancient walls were covered with ceramic tiles as the unique new material.

A special mention went to MM House (Palma de Mallorca) by OhLab (Paloma Hernaiz, Jaime Oliver, Rebeca Lavin, Walter Brandt and Sergio Rivero de Cáceres). Designed in accordance with the Passivhaus standard in order to guarantee optimum energy efficiency, this home features a sloping roof of white ceramic tiles by Cas Cerámicas. As well as for aesthetic considerations, the tiles were chosen for ease of maintenance and effective re-use of rainwater. The judges voiced their appreciation of sustainable architecture, free from visible displays of technology.

The panel of judges awarded first prize in the Interior Design category to the TABA Espazioa (San Sebastian) by Ibon Salaberria for “the balanced dialogue created between the materials that showcased the use of ceramic tiles in a contemporary space”. In the ground floor of the new Tabakalera Culture Centre, located in a former tobacco factory, this 430m² gastro space features a coffee shop, pizza restaurant and wine bar. The floor and bars have been covered with 10 x 10cm ceramic tiles by Dune Cerámica in the style of rugs that help highlight the various enterprises. Each of the serving counters can be used as common tables when not in use for the sale of goods.

The panel also decided to give a special mention to the ‘Casa #77’ (Pamplona) by Raúl Montero Martínez and Emilio Pardo Rivacoba for “the radical nature of a space enveloped in ceramic tiles”. In this innovative project, a loft apartment measuring just 51m² was dramatically transformed with tiles by Keramex.

First prize in the Degree Project category went to ‘In-Situ: Tools and Technology in Traditional Architecture’ by M Wesam Al Asali, a student at the University of Cambridge, for “using a single ceramic to create a construction system in keeping with its function and location”.

A Special Mention was given to ‘Como agua de mayo’ by Belén Collado González, a student at the San Pablo CEU University in Madrid. The judges stressed the plasticity and sensitivity of the use the material was put to.

Among the shortlisted finalists for the awards were projects such as: The Lattice House by Mónica Rivera and E López Matas, a new building at Santa Teresa de Jesus School (Torrent) by Peñin Arquitectos, a refurbishment of Malaga Seminary by Gabriel Ruiz Cabrero, Juan Manuel Sánchez La Chica, Adolfode la Torre Prieto, a house in Santa Rufina Street, Maluenda house (Zaragoza) by Sergio Sebastián Franco and Alegría Colón Mur, a refurbishment of a house in Ataülf Street by Eugeni and Anna Bach and Noor restaurant by GG Architects utilising Techam tiles.

The Tile of Spain Awards celebrates the creative and innovative use of Spanish ceramics in interior design and architecture. Now in its 15th year, the Tile of Spain Awards has earned significant recognition within the architecture community. Both the quality of the judging panels and the standard of the winning projects have established these awards, organised by ASCER, as a notable reference both in Spain and internationally. Architecture and Interior Design make up the two main categories in the Tile of Spain Awards, each with cash prizes worth €17,000. There is also a Final Degree Project category targeting students of architecture with a prize of €5000.