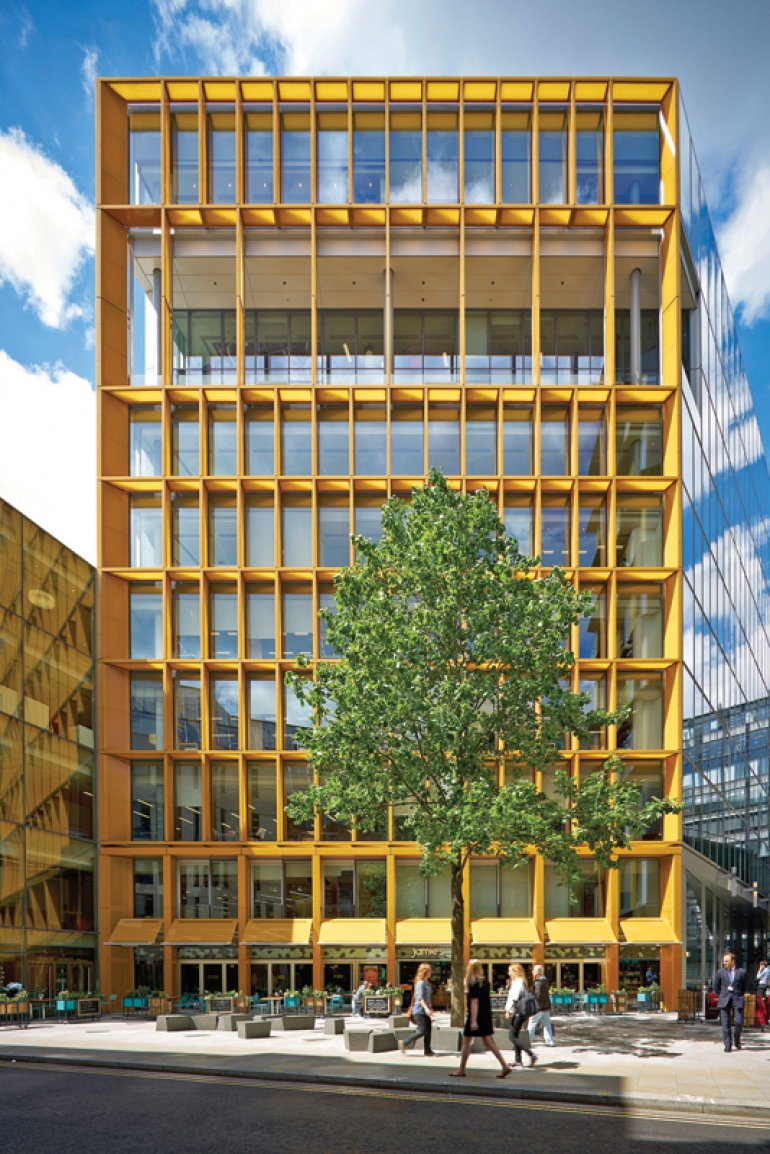 Setting the benchmark for innovative design in working environments

Having recently scooped the award for City of London Building of the Year 2016, New Ludgate has set the benchmark for innovative design in working environments. Here, Future Constructor & Architect explores further.

rganised by The Architects’ Company, projects across the City of London were nominated by city organisations. New Ludgate was selected on the basis that it supports the ambitions of the City of London in delivering a world-class working environment, and the impact it has on the city street scene.

Paul Finch, Chairman of the Judges at the City of London Building of the Year Award 2016, comments: “In respect of the winner, the judges felt that an area of the city where you would not have wished to walk or linger has been transformed. An eyesore had been removed and a destination created, which through the skilful deployment of colour lifted both the eye and the spirit.”

Completed in April 2015, 1 & 2 New Ludgate, EC4 comprises two distinct buildings united by a new public piazza. Together they comprise 355,000ft² of office accommodation and 26,000ft² of restaurant and retail facilities.

New Ludgate transforms an outdated 1980s city block, which had a dull sunken arcade at the lower level, into a generous and lively new quarter for London. The masterplan sets up a dialogue between two new buildings whilst reinstating and improving the public realm around it. A new passageway forms an open space at the east that catches the lunchtime sun. This space has been designed with as little of a ‘corporate’ feel as possible. It is, in essence, a new piece of city.

It is a site redolent with history located on the old city wall. It was formerly home to some outdated 1980s office buildings, the tallest element of which breached Primrose Hill viewing corridor height restrictions, and which offered little in the way of public amenity, with a dull sunken arcade at its lower levels.

Around the site, street lines, grades and views are repaired and improved, such as the processional route to the western entrance of St Paul’s. This, along with much of the massing of the scheme and the curve of the street, was generated by the St Paul’s view corridor, while the main design idea was to reinstate the connection of old city lanes from Farringdon, building on a site that is steeped in history and where the Fleet River used to flow.

The 165,000ft² One New Ludgate building itself comprises nine storeys plus ground floors. It is animated by bars and retail outlets under fixed white glass awnings. The building uses a facade concept of a masonry grid that keeps off direct sunlight and throws light onto the floorplates and, when viewed obliquely from the street’s wide pavements, gives a solidity to the building. “We wanted something quite cool and modern, whereas the other building may be more playful,” says Steve Barton, Partner at Fletcher Priest Architects.

White precast concrete frames, simply detailed, respect their neighbours and set off the floor-to-ceiling low-ion glazing, while vivid amber ‘Kathedral’ glass fins are used on the piazzetta ‘accent’ facade in the new public space, where a mature tree provides shade and visual link for Belle Sauvage.

A floating plane of photovoltaic cells lines the roofscape along with plants and a green roof, while both buildings flank a still-operating two and a half-storey city electrical interchange, which allows light into the heart of the site.

One New Ludgate also boasts extensive private external space, accessible from every office floor. This includes setback loggia and balconies and a substantial south-facing terrace with uninterrupted views of St Paul’s which is capable of accommodating 300 people at the fifth floor setback level, landscaped as elsewhere by Gustafson Porter.

Retail and restaurants line the ground floor, reinstated at grade, while the passageway’s York stone paving morphs from standard York stone into dark granite to draw pedestrians through. In terms of sustainability, both buildings on the site are rated BREEAM ‘Excellent’, influenced mainly in One New Ludgate’s case by the amount of daylighting it has been designed to achieve, reducing the need for artificial light on the office floors.

The collaboration helped the planning and letting process with both teams of architects appearing at committee and helping to achieve a relatively straightforward passage through the planning system. There were a lot of gains for the city including the repair of the public realm, wider pavements, the new element of public space and the reinstatement of the St Paul’s viewing heights so that the breach was taken away.