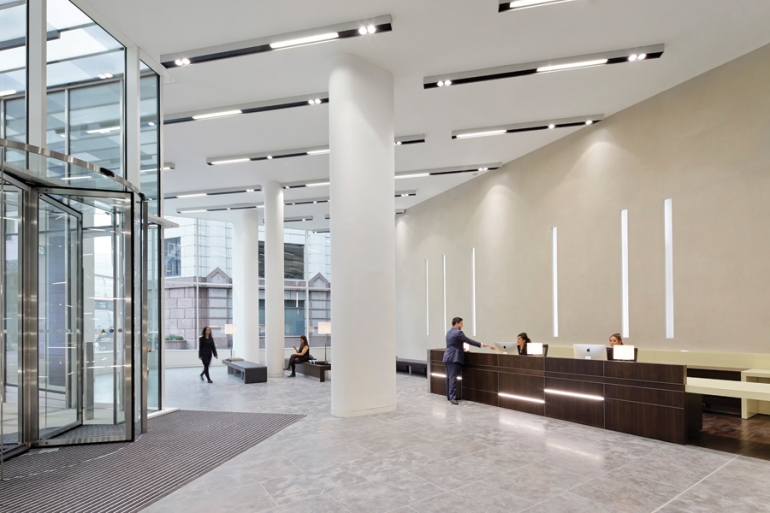 Construction contractors often face issues of proximity to buildings and infrastructures – but the £31m redevelopment of 71 Queen Victoria Street, London, presented them in abundance.

he eight-storey office building sat in the heart of the busy City of London, almost directly above both an electricity substation and Mansion House Tube station. It was to require demolition of the building cores, new foundations and a new steel frame, as well as a complete internal refit. Any contractor bidding for the demolition, building and fit-out contract would have realised that this wouldn’t be simple, with both access challenges and proximity to existing infrastructure.

Bouygues UK won the contract in part because it had conceived a bold approach, which would allow it to shave three months off the timeline by installing temporary bracing to stabilise the structure, then running demolition and construction programmes simultaneously. Delivering on this promise took extremely careful planning, but the resulting successful programme won Project Director, Ben Tominey, a gong in the New Build and Refurbishment £30-60m category at the Construction Manager of the Year Awards.

The foundations for success were laid long before the team ever reached the site, said Ben: “For this project we were fortunate to have some time upfront, to work on it at our head office. We visualised the site and all our intentions, taking into account constraints such as its neighbours and city location. We had to consider the physicality of how to get around the site and deliver vast amounts of materials. From this, we could create a series of drawings and plans and lastly use Asta Powerproject to turn it all into a physical plan of works.

“We took the time to appreciate the difficulties first – then spent time planning around those difficulties, and taking the risks away.”

The team realised upfront that the city location presented one glaring challenge: to erect the new steel frame would require a tower crane to hoist and position its sections, as well as to lift other materials around the site. Unfortunately the site was so confined that this would be a huge headache. This large project would require significant deliveries – but the obvious delivery point on the road outside would mean closing the whole thoroughfare, with significant time and cost implications.

Ben conceived an innovative solution which wiped away many of these issues at a stroke – although it took some convincing of both the client and his own management. He comments: “I recalled a recent visit to a steelworks which used an overhead gantry crane to move large steels around and thought, why can’t we have one here? Deliveries could then be driven directly off the road and into the building, through the main entrance. We could take the materials straight from the back of a lorry and hoist them to where they were needed. And, because it was inside the building, we could install roofing and prevent rain coming into the building – which would have been inevitable with a tower crane.”

Planning the sequence of works to install the temporary bracing, Ben used Asta Powerproject to capture his thinking and turn it into practical reality. “We had in mind how we would do this, planned it in drawing form and consulted with our structural professionals. Then we could develop a sequence for installation of temporary braces in Asta Powerproject and link it all up. This told the guys onsite exactly what to do and when. Software-based planning is critical, because it creates the exact parameters of what to do and when.”

Asta Powerproject helped Ben to keep a very tight rein on work onsite. “I physically manage works onsite – and I expect my team to spend the first part of the day doing the same. You can’t run a site from a desk. You need to see and understand what is going wrong in order to be in a position to do something about it, and manage the change, or you lose the day, which is why I keep Asta Powerproject constantly open on my laptop. I was the sole owner – because one of the problems with any programme management software is that, when lots of people use it, they tend to break project links.”

With a large team of managers, each responsible for certain floors, Ben ran a strict schedule of daily, weekly and monthly meetings and briefings, using Asta Powerproject as a communications aid: “We would have the programme up on screen as well as in printout, so that everyone could see it, and could easily mark it up. We could then make careful changes using the baseline to work out where any activities needed to fit. It ran to 1200 individual items, each broken down into subsections. To simplify that for subcontractors. We also exported data from Asta to our in-house Last Planner spreadsheet to show a simplified version of the plan that everyone could understand.”

As so often happens, the project faced one critical unforeseen problem when, just six months from completion, the MEP contractor went into administration. Having been responsible for the largest subcontractor package of all, activities suddenly ceased, leaving Bouygues UK with a major problem on its hands. Ben adds: “We had to do some very fast work – including re-engaging 35 of their own subcontractors and 45 individual suppliers. We had to find alternatives in a few cases, as some smaller firms unfortunately went down too, and we directly employed some of the company’s management to keep as much continuity as we could. We effectively created our own M&E department.”

Re-planning the remainder of the programme was unavoidable, as Ben recounted: “We had to completely and utterly reschedule all the programme for the remainder of the build – but that wasn’t the biggest issue. We needed to take everything to pieces and compare it to the plan. We ran three major auditing activities, as we had to find out exactly where every single item was, what had been installed and what was in transit or still in the warehouse – right down to the single light bulb and fuse – just to replan and recommission the work.” With herculean effort, Ben then input all the new activity details into Asta Powerproject, to bring it back to plan – it took three weeks, but Bouygues UK didn’t lose a single day on the overall programme.

On any complex build, all eyes are on the critical path – which means that you need to be able to see it very clearly. “Having programme management software is critical. It gives you the logic to create a critical path, which no spreadsheet can do,” explains Ben. “On a complex job you must know exactly what the drop-dead critical items are and be able to monitor them, in order to prepare for actions.”

He continues: “One of the great things about Asta Powerproject is the baseline function. You can have two programmes visible side by side, so on each line you can compare what has actually happened with the original plan. It lets you see exactly how each task has an effect on another task. You can also simply hit the reschedule button, to see the effect on the end date – then figure out what you need to do and change to get back to the original date. The software lets me go in and change a task to see the effect of allocating more resources, or having all the material arrive earlier.”

In such a complex build the planning software’s flexibility was really put to the test. Ben explains how this benefited him in directing work: “I particularly like that you can allocate resources and owners to each task. When I wanted to assign someone to the third floor of the building, I could do that, then give them a breakout programme just for their floor, often just a single page with just their own items showing. I could break it down as I wanted – by contractor, by floor level, or by discipline. Because it had all been properly allocated at the start, I could do a whole lot of different things quickly. To me, that’s one of Asta Powerproject’s best features.”

This project was certainly complex, but innovative thinking, value engineering, clear leadership and a tight focus on managing change and challenges led it to a highly successful conclusion, in which Asta Powerproject played a supporting role.